Star Wars Rebels has consistently been a source of excitement for fans of the franchise throughout almost three full seasons. Its most recent run of episodes though has failed to impress, doubling down on its decidedly more kid-friendly approach, while failing to give us anything in the way of compelling story arcs.

That said, it’s also a series that’s always made a point to save the best for last, giving us a good deal of hope for the second half of its third season. That all leads us to wonder: How will Rebels close things out this time around? Thankfully, we have a brand new trailer (above) that gives us plenty of information.

1. The TIE Defender makes its debut 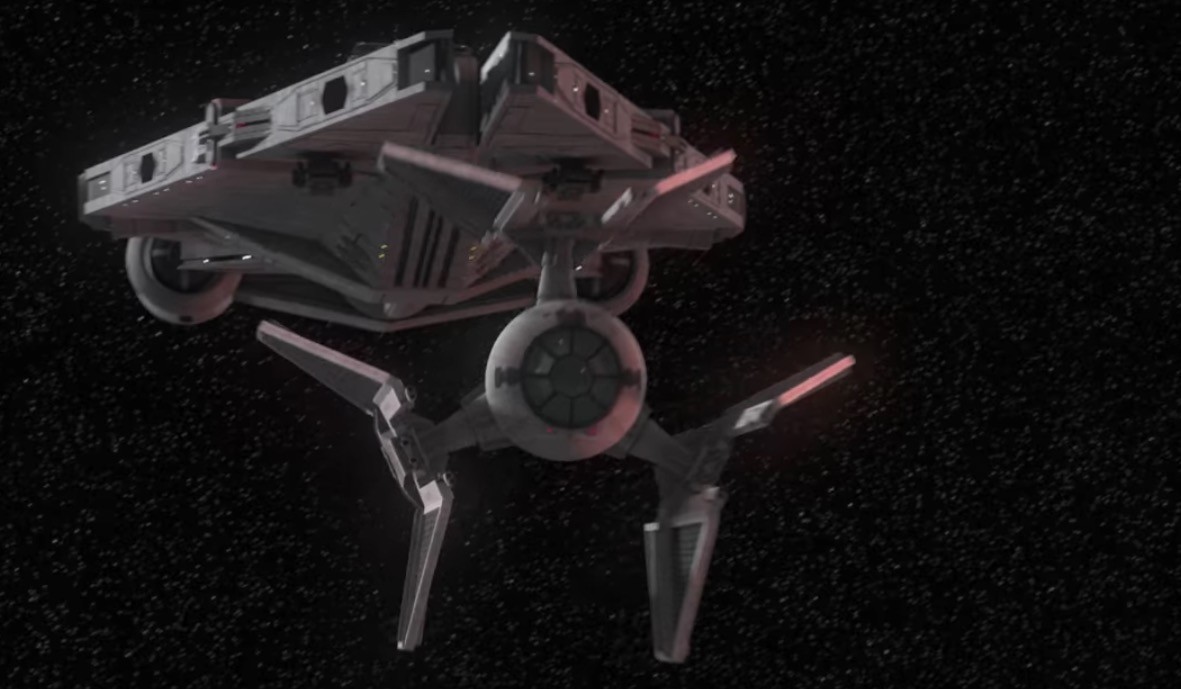 Up until the last year or so, we hadn’t seen many variations on the classic TIE Fighter design from the original trilogy. The most recent version of the Battlefront video game changed that though, re-introducing the Bomber and Interceptor models, as well as unveiling the Defender for the first time ever. Rogue One: A Star Wars Story in turn, gave us the TIE Striker, rounding out a diverse lineup of Imperial fighters.

That brings us to Rebels, set to prominently feature the Defender en masse. We get a couple looks at it in the trailer, with the best one coming in the opening moments. The triple-wing design makes for an intriguingly different kind of fighter, while past episodes have hinted that it will be a scourge of the skies for the Empire.

2. The first signs of the Death Star’s construction on Geonosis 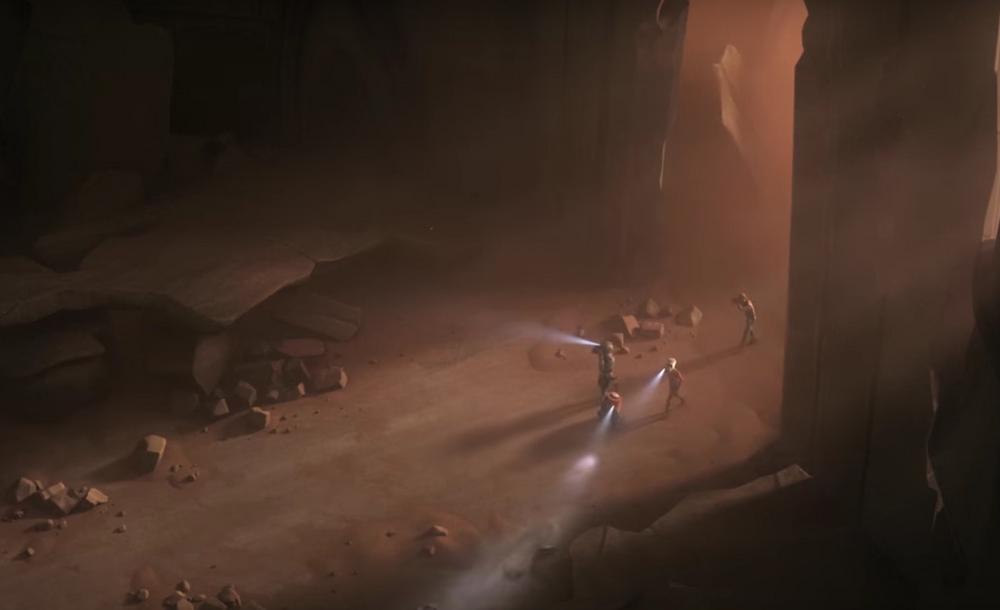 Geonosis is known in Star Wars lore as the home planet of the species that originally designed the Death Star. As we later learn in the Catalyst: A Rogue One Novel set directly before the Rogue One film, the population of the planet was used by the Empire as slave labor in the early stages of construction for the battle station. Soon after that, to hide their tracks and keep the Death Star a secret, the Empire sterilized the entire planet, wiping out the Geonosian species entirely.

Above, we see our Rebel heroes happening upon the now-unpopulated planet, as they stumble on some of the initial fallout from the Death Star’s construction. What we don’t know is how much they’ll discover in the process. 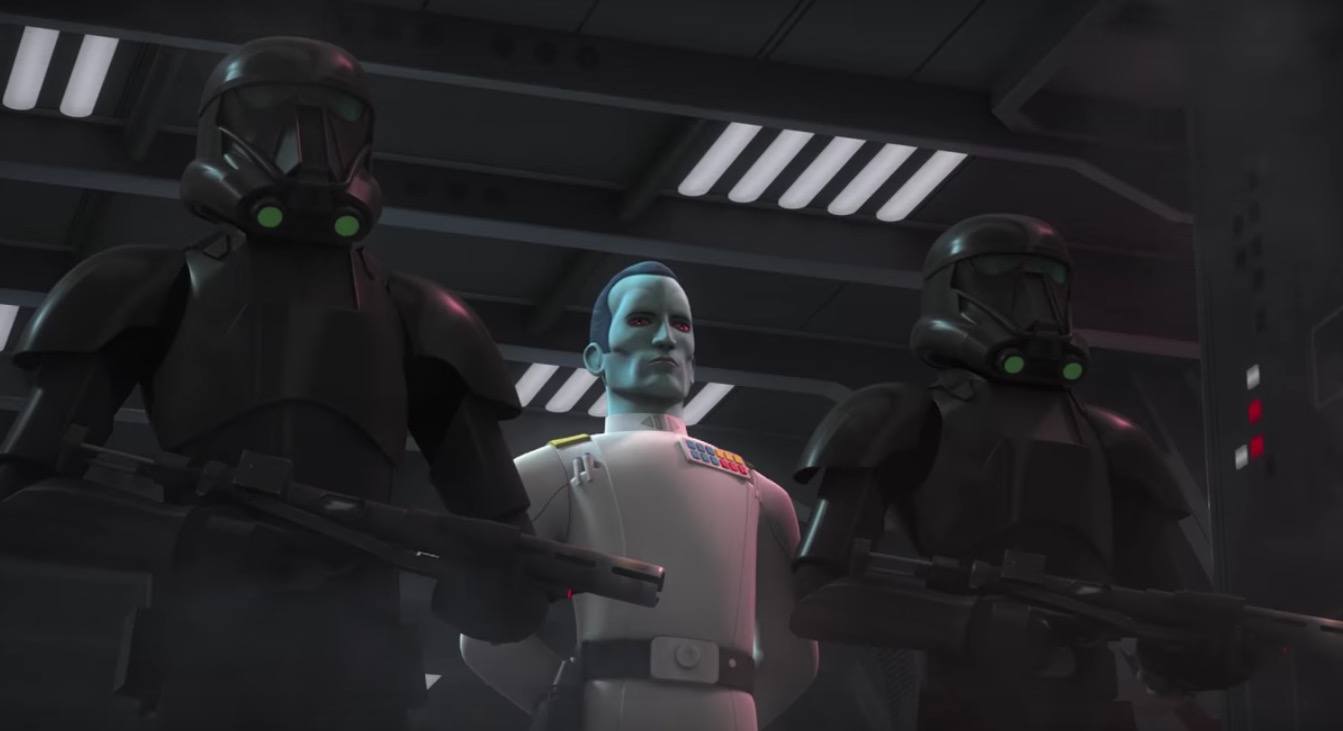 In addition to variants on the Imperial TIE Fighter, Rogue One also introduced new Stormtroopers. This, in turn, gave us the black-clad Deathtroopers, an elite squad used by Imperial high command to protect high-value officers. It would appear as though Grand Admiral Thrawn qualifies as one of those officers, with two Deathtroopers standing on either side of him in the most recent trailer.

4. Thrawn gets a step closer to discovering Agent Kallus’ betrayal 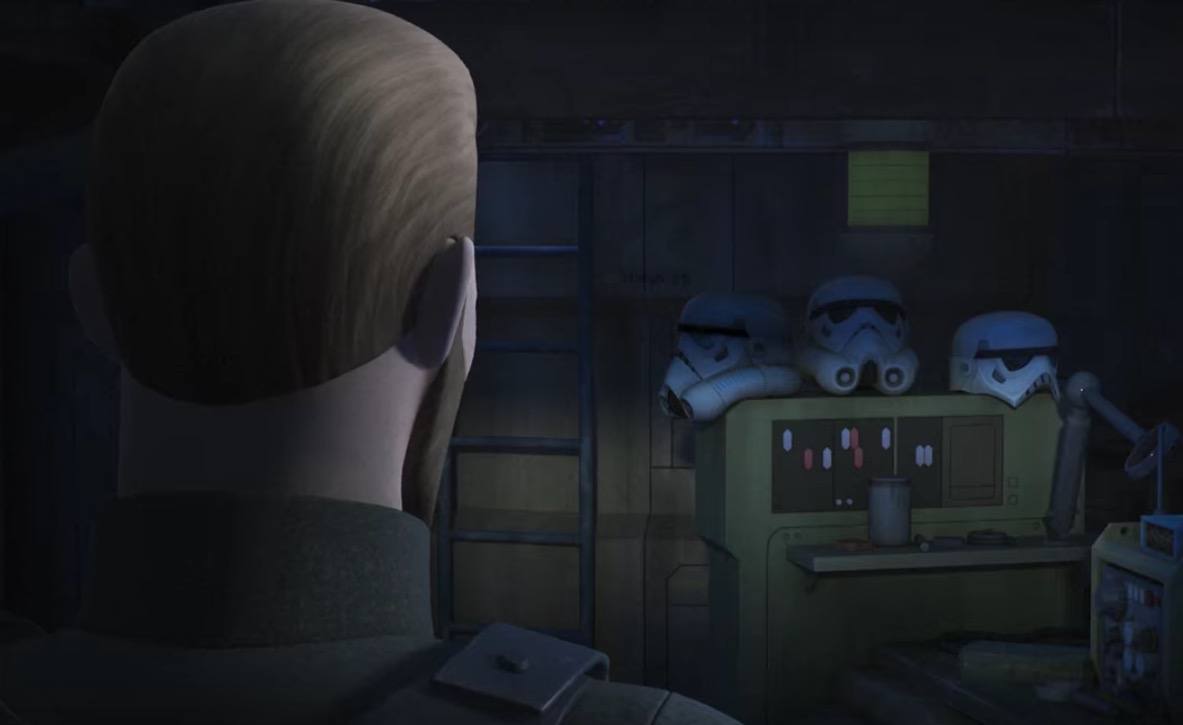 The Rebel Alliance has traditionally used “Fulcrum” as a moniker for their primary informant. We first saw it used by Ahsoka in the first season of Rebels, and now, Agent Kallus has taken on the role, operating as a spy inside the Empire. As he keeps passing on Imperial secrets, Grand Admiral Thrawn continues to close in on his betrayal, which doesn’t bode well for his long-term survival in the slightest.

5. A handful of major players arrive on the scene 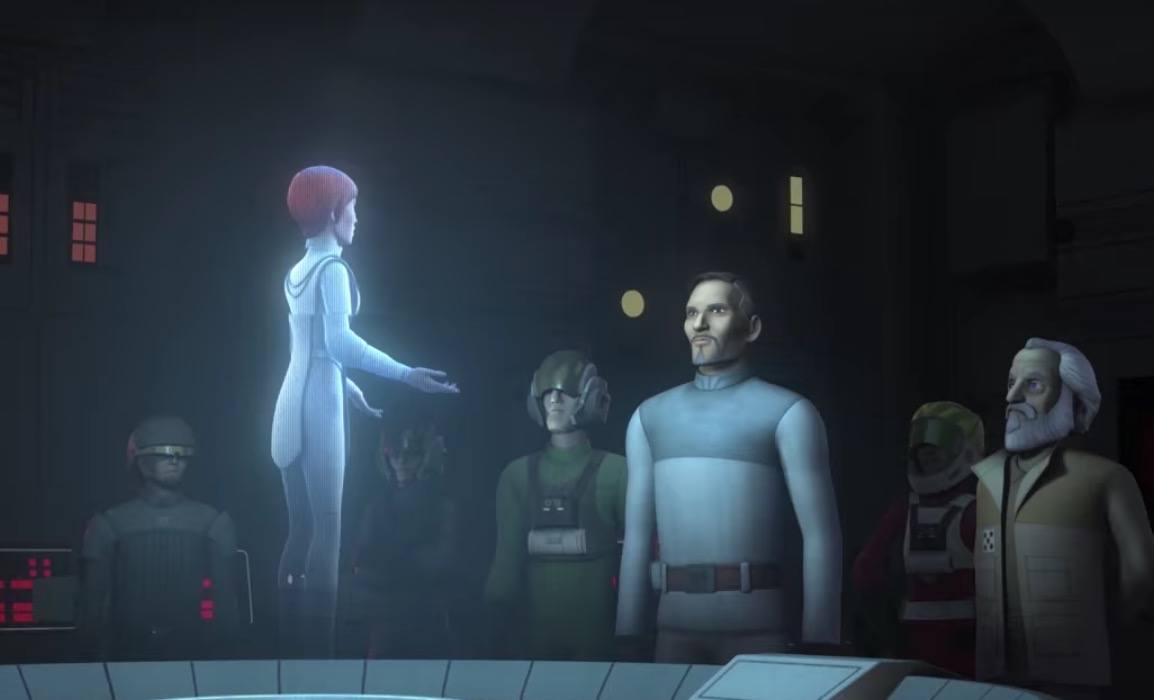 We haven’t seen much of the Rebel Alliance’s leadership in either of the show’s first two seasons, but all that’s about to change. Above, we see Mon Mothma, Bail Organa, and General Jan Dodonna, who are all major players in the films, and part of what will soon become a fully-formed uprising against the Empire.

6. The Rebel Alliance comes together at last 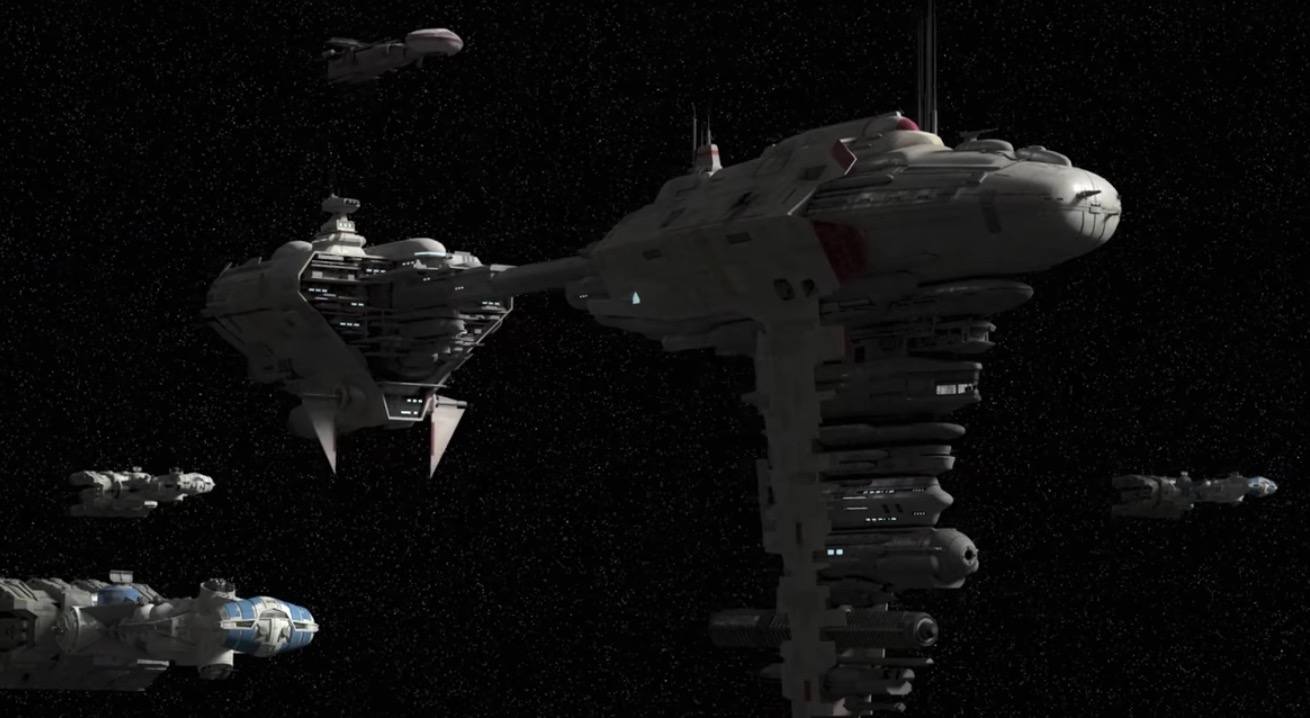 Up until Season 3, the rebellion against the Empire existed only in scattered cells across the galaxy. We all know they eventually come together to form the Alliance, and it looks as though the upcoming run of episodes will show those beginning stages, eventually leading us into the events of Rogue One sometime down the line. 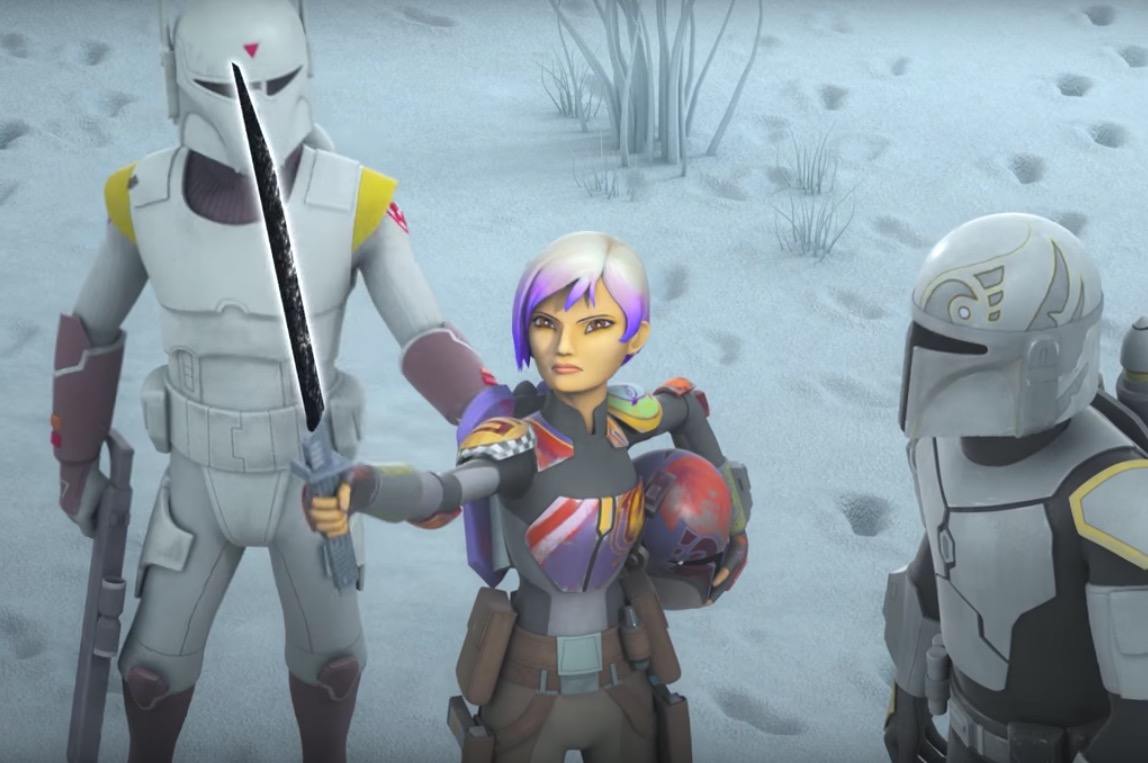 The Darksaber was a weapon first introduced in the animated Star Wars: The Clone Wars series, wielded by Deathwatch leader Pre Vizsla. After it was taken by Darth Maul, it stayed in his possession for years, until Sabine Wren stole it, bringing it back into the control of a Mandalorian. It looks like she’ll be utilizing the ancient lightsaber to unite Mandalore agains the Empire. She attempts to enlist her mother in the fight in the above frame. 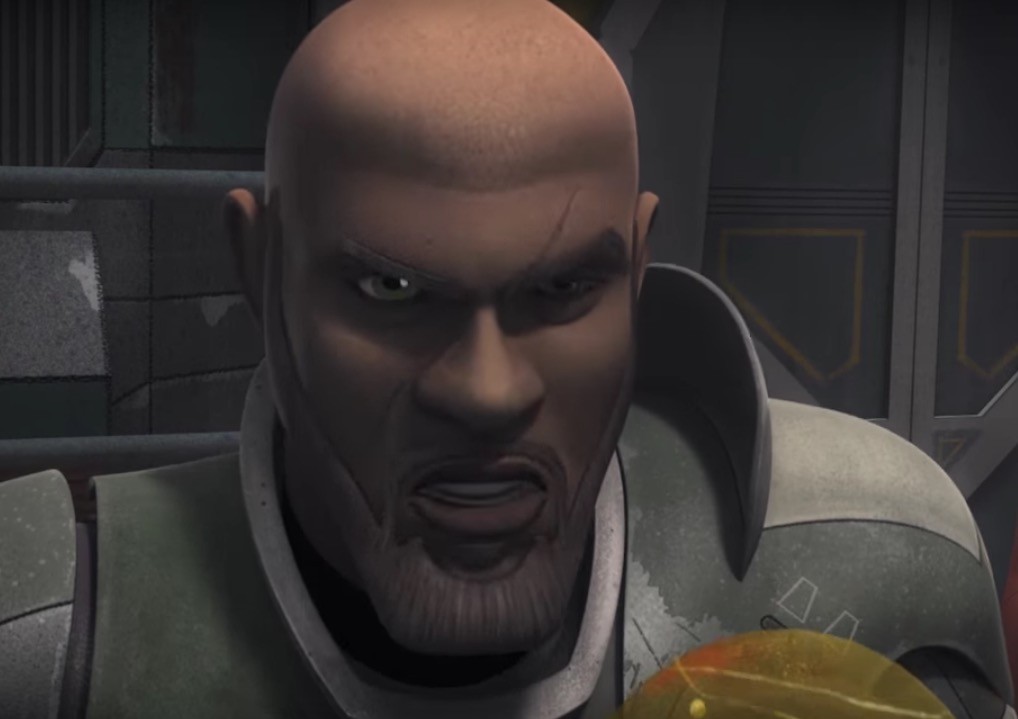 Saw Gerrera first appeared in The Clone Wars, as an insurgent battling a Separatist invasion. He then appeared as a violent extremist in Rogue One, eventually perishing in the Death Star’s attack on Jedha. That left a whole bunch of years unaccounted for in his life, and Rebels will begin to fill that in during the second half of its third season. Forest Whitaker even signed on to voice his own character, making it that much more exciting for anyone who loved Rogue One.

9. The Empire won’t be taking any prisoners 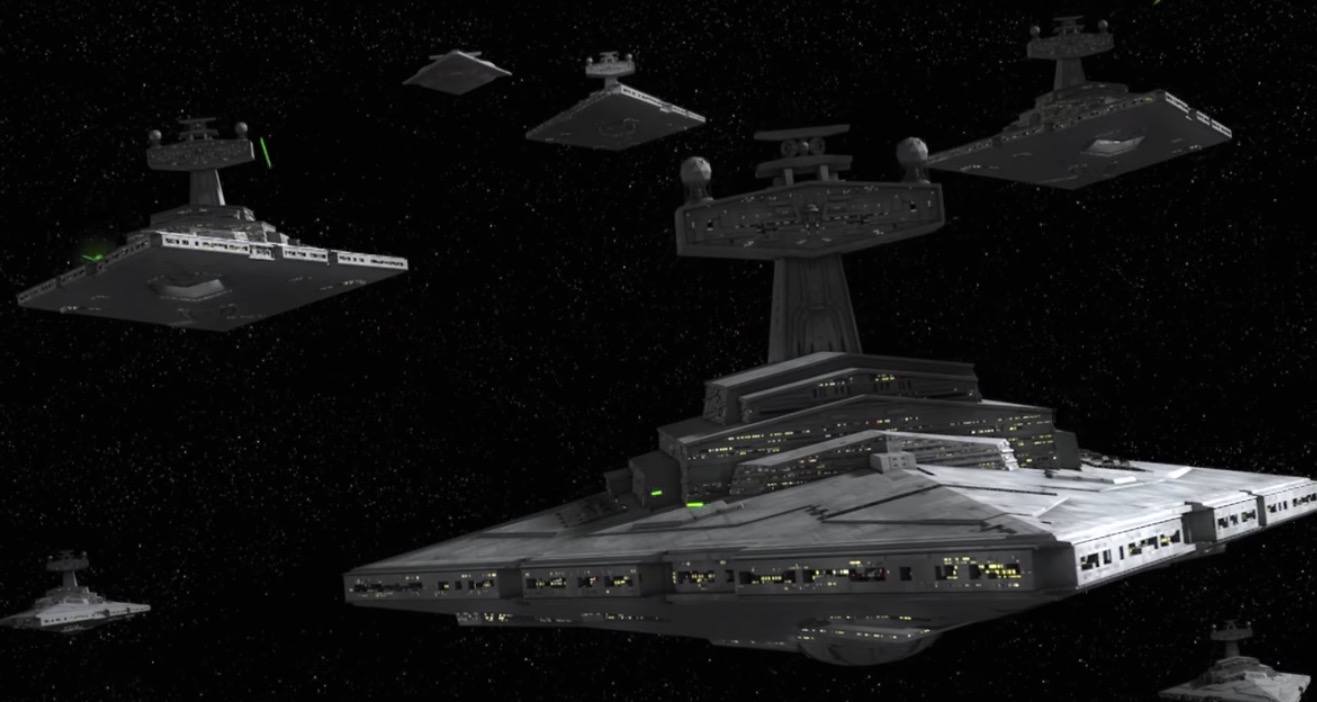 The second half of Season 3 won’t be short of large-scale battles, evidenced by the massive fleet of Star Destroyers we see above. Even knowing what we do about the Rebel Alliance’s eventual triumph, it’s always useful to remember that the Empire was downright terrifying at the height of its power, and Rebels seems set to remind us of that in full force.

10. Obi-Wan Kenobi gets a long-awaited rematch with Darth Maul 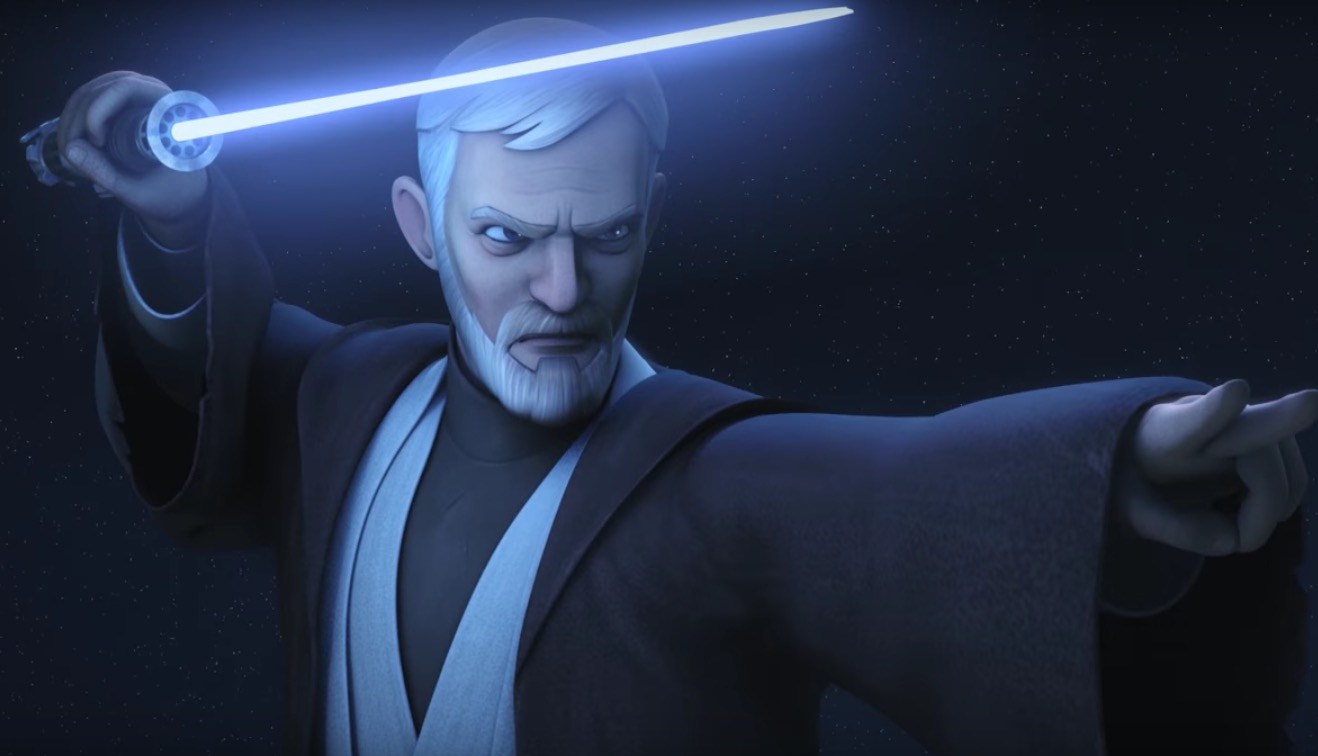 Darth Maul has mostly been an afterthought this season, but when he has surfaced, all signs have pointed toward a showdown on Tatooine with his old enemy: Obi-Wan Kenobi. We finally have confirmation of that showdown in the latest trailer, bringing old Ben into the animated fold for the grudge match of the century.