Star Wars Rebels has made itself into a fixture in the Disney franchise ever since it hit the air two years ago. Over the show’s brief run, it’s continued the story laid out in the wildly popular Star Wars: The Clone Wars TV series, while successfully reintroducing beloved characters. We’ve also been treated to a brand new cast of characters, all placed into a timeline that runs straight into December’s release of Rogue One.

London’s Star Wars celebration gave us our first extended look at Season 3 and it looks like things are about to get crazy on Rebels. Producer Dave Filoni has pulled out all the stops for the next run of episodes, even bringing back a popular Expanded Universe character originally thought to be gone from Disney’s Star Wars canon. So with that, here’s everything you need to know to prepare for an epic third season.

1. Kanan recovers from his injuries at the end of Season 2 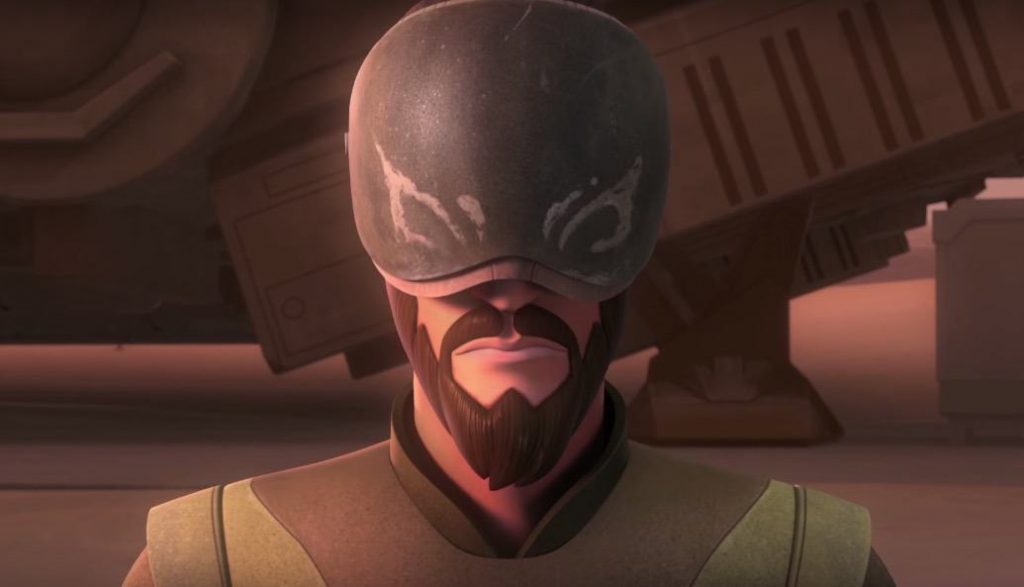 When we last left the former Jedi, Kanan Jarrus, he was blinded in a duel with Darth Maul. We now see the remnants of that trauma as Kanan tries to recover both physically and emotionally. Whereas before he was a man defined by his physical abilities, he now has to lean on his spiritual connection to the Force in order to help his friends in the ongoing battle against the Empire. His journey won’t be an easy one. Still, he’ll need to muster all of his strength to save his Padawan from the pull of the dark side.

2. Ezra begins to dabble in the Force’s dark side 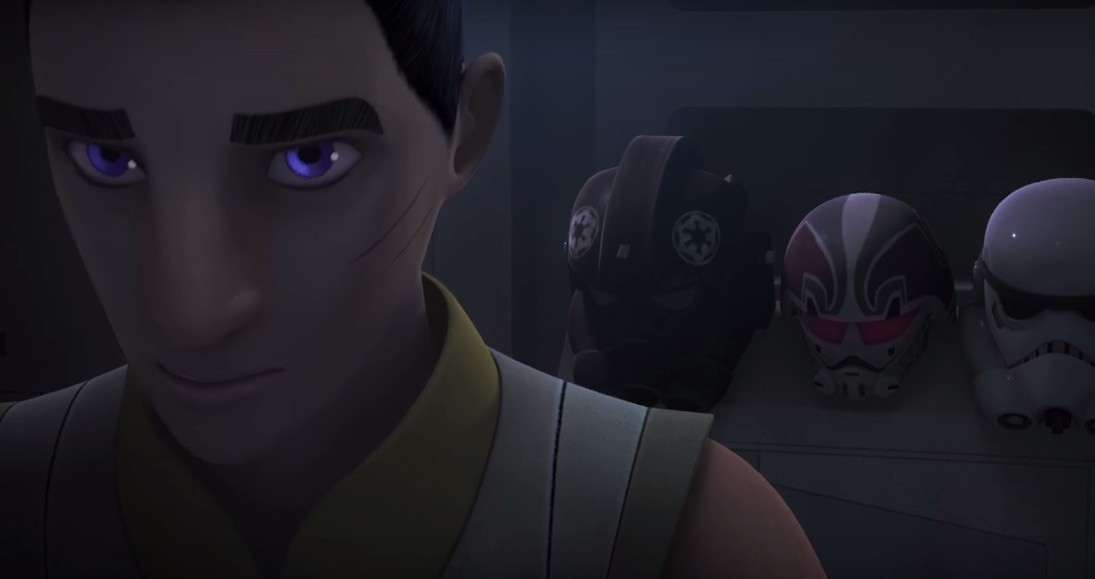 Ezra’s path is similar to that of another reckless young Jedi: Anakin Skywalker. Both characters were orphans who cared deeply for their friends and loved ones, and only wanted to protect them. Where Anakin fell from grace was in thinking he could use the dark side of the Force for good, eventually becoming the same evil he swore to defeat. Ezra appears to be treading down a similar road in Season 3. We see him still in possession of a Sith holocron, vowing to use the knowledge contained within to help the Rebels. As we know all too well, even the best intentions can be corrupted, spelling dark times ahead for the young Padawan. 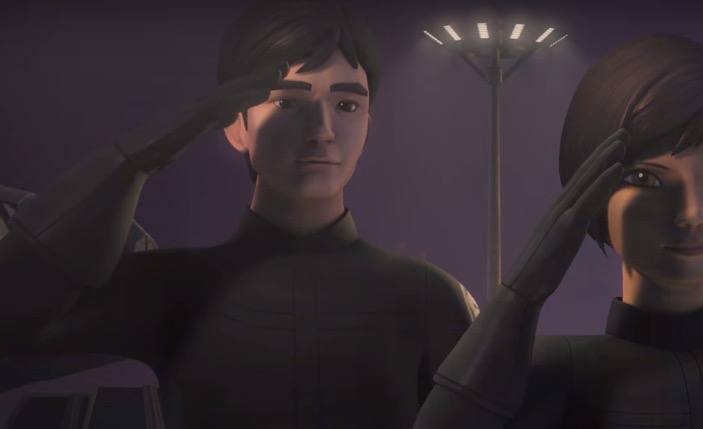 Wedge Antilles holds the distinct honor of being the only Rebel pilot to survive both Death Star missions. He is often painted as one of Luke’s closest friends within the Rebellion. Rebels will tell the story of his past as an Imperial TIE pilot that defected from the Imperial Academy. The trailer doesn’t show us much past that, but we do see our main characters corresponding with another hidden operative that leads them to Wedge. The last time they did this, the Rebel informant was Ahsoka Tano. This time around, it’s unclear who that person might be, but perhaps we’ll see another familiar face show up along the way.

The introduction of Grand Admiral Thrawn is rooted in years of Star Wars Expanded Universe history. The blue-skinned Imperial officer is most known for his role in Timothy Zahn’s Heir to the Empire book trilogy, which was set directly after the events of Return of the Jedi. In those books, Thrawn is the primary antagonist to our heroes, painted as a master tactician and a formidable foe. When Disney threw out the entire Expanded Universe, that meant Thrawn essentially never existed in the main Star Wars storyline.

Rebels brings him back into the fold, a move the coincides with new novel from Zahn simply titled Thrawn. His appearance in the Season 3 trailer was by far one of the biggest highlights of London’s Star Wars celebration. It was met by deafening cheers from everyone in the room at the time of its unveiling. He’ll now be the main villain for Dave Filoni’s animated series and the Star Wars franchise is far better off for it.

Darth Maul’s arc in The Clone Wars was easily the high-point of the entire series. His fate though was left open-ended, leaving the door wide open for Rebels in its second season. The show ended up delivering in spades, bringing the former Sith back into the mix to tempt Ezra to the dark side. Maul will play a similar role in Season 3, bringing Ezra to what appears to be his home planet of Dathomir. He and the young Padawan do share one common goal: Defeating Emperor Palpatine. Where they differ is in their position relative to the Force, something that looks to play a large role in Ezra’s Season 3 arc. 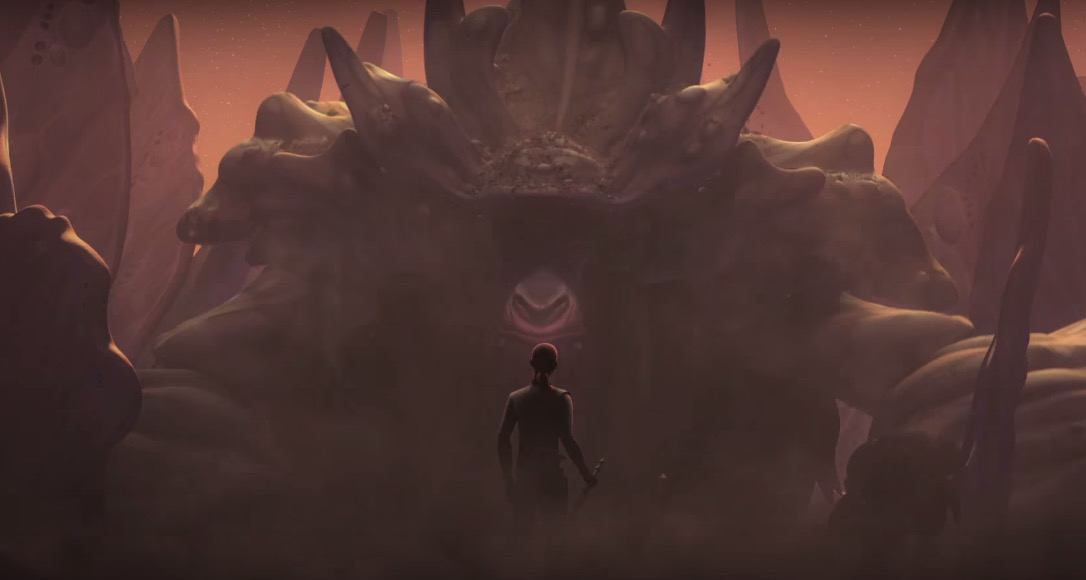 We’ve seen all sorts of interesting Force-sensitive species in the extended Star Wars universe. The Clone Wars even brought us to a planet where the physical embodiments of the light and dark side existed in tandem, kept at bay by the characters’ father. For Rebels, we get the Bendu. The Bendu is a creature defined by its existence in the exact middle, representing the center position of the Force. With Ezra trying to tread on the dark side to help his friends on the light, the dichotomy between the two will be a prevailing theme throughout the season. 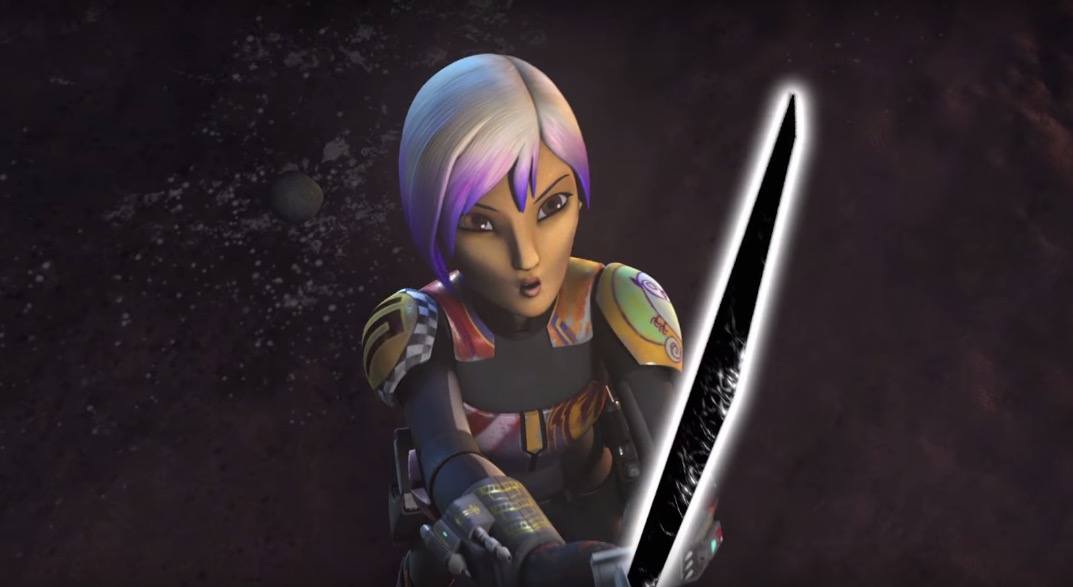 It’s always interesting to see new twists on the Jedi lightsaber. What we see in the image above is known commonly as the darksaber, a weapon that was stolen by the Mandalorians from the Jedi during the era of the Old Republic. It was then passed all the way down to Pre Vizsla before his death at the hands of Darth Maul in The Clone Wars. The darksaber resurfaces again, this time in the hands of another Mandalorian, Sabine Wren. Few non-Jedi have proven capable of brandishing a lightsaber effectively, but with the Mandalorians’ history as warriors, it makes sense to have Sabine be the one who tracks it down.

Keep an eye out for Season 3 of Star Wars Rebels, which will kick off this fall on Disney XD.