One of the most exciting things about the DisneyXD television show, Star Wars Rebels, is that it was the first canon Star Wars media to take place near the time of the original trilogy since 1983’s Star Wars: Return of the Jedi. Since then, we have also been introduced to the anthology film, Rogue One: A Star Wars Story, which takes place in a similar time period as Rebels and deals with many of the same themes: specifically, the growth of the Rebel Alliance.

With the second trailer for Season 4 of Rebels (above) just dropping, we’re starting to notice some major overlaps in points. We took a look at some of the ties to Rogue One in the Rebels trailer, as well as a few ways that the movie teased hardcore fans with Rebels Easter eggs.

The biggest and most obvious reference to Rogue One in the Rebels trailer was a moment in which Grand Admiral Thrawn is speaking to Grand Moff Tarkin via hologram. Tarkin mentions a pet project of Thrawn’s taking a backseat to “Stardust,” the Imperial project spearheaded by Director Orson Krennic. We don’t see Thrawn’s reaction to the news, but we can guess that it’s not a positive one.

Considering that there is no real mention of Thrawn in the original trilogy, and the close proximity in the timelines (the final season of Rebels will reportedly brush right up to the events of Rogue One), this could be a serious moment in his story. Thrawn is not your traditional Imperial officer, but a person of great intelligence that follows his own personal code. Seeing his own project sidestepped for the Death Star, something that the character would view as a major military misstep, could see him walk away from the Empire.

Rogue One introduced the character of Saw Gerrera to the majority of Star Wars fans, as an old, broken-down extremist that had seen his best days gone by. In the film, Gerrera lived in a cave with prosthetic legs and a massive support system, including a breathing device. He also seemed paranoid and exhausted from his constant battle against the Empire.

But this isn’t the first time we met Gerrera. The character actually made his debut in Star Wars: The Clone Wars, where he trained in military tactics to protect his home planet by — get this — Anakin Skywalker. He resurfaced in Rebels in Season 3, still a rebel extremist, but not quite the man we see in Rogue One.

The movie teased how the Rebel Alliance split with Gerrera over ethics and the “ great many problems” that he caused. In Rebels‘ Season 4 trailer, we see Gerrera speaking to Mon Mothma about not being willing to truly fight the Empire. Exploring more of Gerrera’s issues with the rebellion could make a few aspects of Rogue One a little bit more clear, in retrospect.

Rebels creator Dave Filoni has talked about a number of topics, but one of greatest interest might be the exact ways that we will see Rebels start to tie into what we saw in Rogue One — and to a lesser extent, the final 30 minutes of Star Wars: A New Hope. He said:

Now that Rogue One is out, it opens up a lot of possibilities for us to tell these stories. We can go to Yavin now. We can start to deal with the way things worked out in the film and include ideas that are happening prior to that…The Phoenix group of Rebel soldiers are kind of petering out. So they’re redistributed into Mon Mothma’s group on Yavin and Dodonna’s group.

You see a restructuring of certain cells, and certain cells get destroyed. And that’s true of the ships as well. So there’s lots of little, neat, detail level things that happen when our characters are heading into Season 4 and are absorbed into the kind of pre-Rogue One era, which I thought they did beautifully in the film.

Filoni seems to be saying that he’s finally able to really start to tie together some of the loose ends. We’re a little more free to explore the rebellion, the base on Yavin IV, the different cells of rebels, and the somewhat strained relationship between the leaders. It was clear in Rogue One that what we think of as the Rebel Alliance in the original trilogy was born out of necessity in the Battle of Scarif, while Mon Mothma and the other leaders argued about their direction.

Mothma tells Ezra Bridger in the Rebels Season 4 trailer that they are not ready for war, while Gerrera implores him to choose between running her errands and doing something that actually matters. Given the theme in the trailer about the importance of “how you choose to fight,” it seems fair to suggest that the final season of Rebels might explore some of those undertones in the rebellion.

The Rebels make a trip to Eadu?

Nothing is for certain, because all we have is little bits of information and two trailers for Rebels Season 4. But in the most recent trailer, it certainly looks like the crew of the Ghost — and specifically, Sabine and Ezra — have a mission on the planet of Eadu. We can see tall, rocky structures and clouds, although it’s not raining as it typically does on the planet. It’s on this planet where we see a massive satellite dish blown up in the trailer.

In Rogue One,  Galen Erso resides in the inhabited planet, Eadu. The scientist ultimately loses his life there after a handful of Rebel Alliance X-wings bomb the facility in which he’s held. It’s all speculation at this point, but it’ll be interesting to see if the rebels’ mission on Eadu in Season 4 translates at all to what we know about Eadu and Galen Erso in Rogue One. Could there be a loose end that we don’t know needs to be tied up? 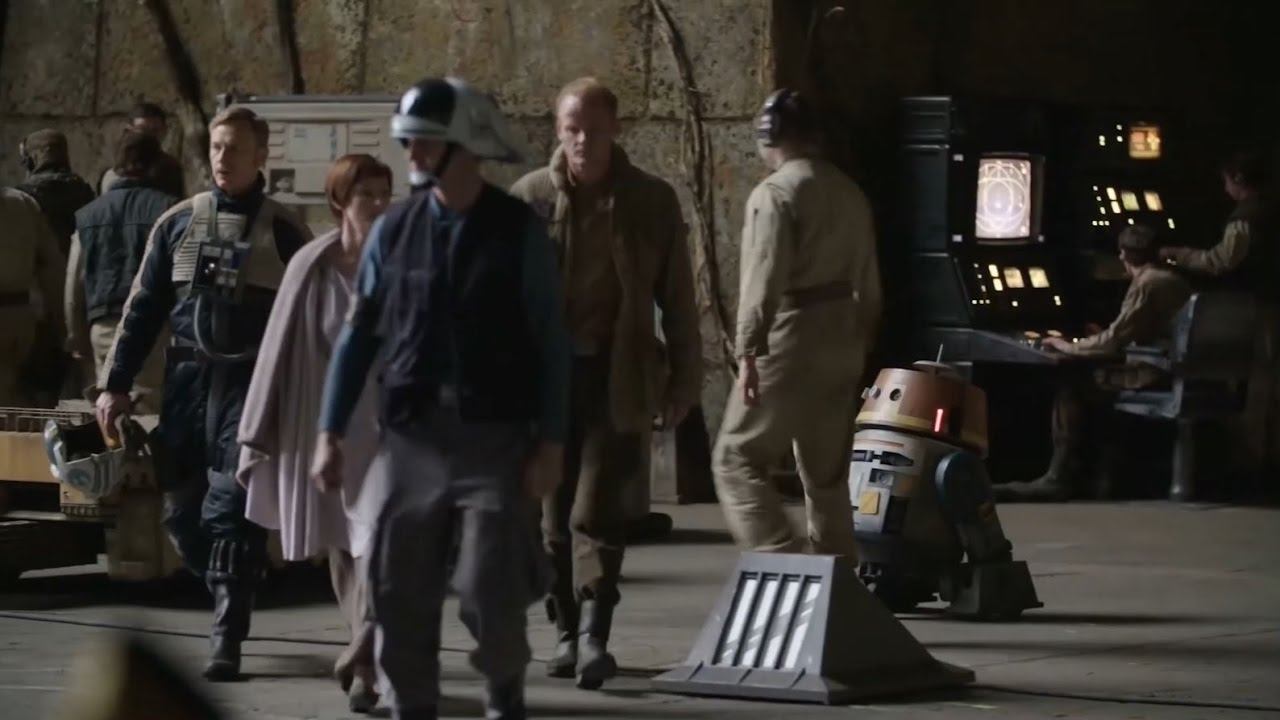 Chopper at the rebel base in Rogue One | Lucasfilm

In Rogue One, there were actually several sly references to Rebels. We learned that at least a handful of the characters from the show are present at the base on Yavin IV, not long before Han Solo, Luke Skywalker, and the gang show up at the end of A New Hope. The first instance is in the second half of Rogue One, in a scene where “General Syndulla” is called for over the intercom. As later confirmed, this references Hera Syndulla, the captain of the Ghost. It sounds like she will receive a promotion of sorts.

Eagle-eyed fans saw the second Rogue One reference to a character from Rebels in live action. During a scene with Mon Mothma on the platform on Yavin IV, you can very briefly see grumpy astromech droid Chopper (C1-10P) gliding in the background. If you listen carefully, you can even hear him speaking his strange, wompy droid language.  Quite the cool Easter egg for Rebels fans!

The Ghost at the Battle of Scarif

The Ghost, the diamond shaped ship at the bottom, as seen in Rogue One | Lucasfilm

The other major Easter egg in Rogue One was the primary ship from Rebels, the Ghost, appearing a handful of times throughout the battle above Scarif at the end of the movie. We don’t know exactly who is piloting it or who is even on board for that matter. You might guess that Hera and Zeb are running the show, but the Rebels trailer shows Hero piloting an X-wing. So, the details are foggy. But we know that the ship is definitely there for the main battle at the end of Rogue One.

The question we are left with, of course, is whether the Ghost and its crew make it out of the battle alive. We don’t have any appearances from Ezra, Kanan Jarrus, Hera, Zeb, or Sabine in the original trilogy, and there has been no effort to retcon them into canon, like they have with Captain Rex from The Clone Wars and Rebels. We never see the Ghost make the jump to light-speed at the end of the battle, but it also doesn’t seem to get disabled or blown up. Will the final season of Rebels shed some light on their fate?

The Hammerhead plays a major role

Back in Rebels’ Episode 12 of Season 2, the main characters — aided by a special appearance from Princess Leia — work together to steal a bunch of Hammerhead Corvettes from the Empire. If you’re unfamiliar with a Hammerhead Corvette and its significance, it’s a strong-bodied ship with powerful engines. Outside of that, YouTube channel Star Wars Explained does a good job breaking down any more information that you might want.

What is the Easter egg here, you may ask? Well, one of the stolen Hammerhead Corvettes plays a pivotal role at the very end of Rogue One. With a Star Destroyer disabled and needing to take down the shield above Scarif, Admiral Raddus orders a Hammerhead to ram into the Destroyer. They end up taking down two Star Destroyers and the shield gate. This allows Jyn Erso to transmit the Death Star plans and setting up the events of A New Hope. So, indirectly, the heroes of Rebels have a massive impact on the Battle of Scarif.