A long time ago in a galaxy far, far away Star Wars changed the face of moviemaking forever. Decades after the space opera first hit theaters, the franchise remains one of the most beloved film series in history, as further proven by Disney’s $4 billion acquisition of Lucasfilm in 2012. Anticipation is high for the studio’s first big-screen foray into the Star Wars universe, set to hit theaters on December 18. However, before the world gets its first taste of Star Wars: Episode VII – The Force Awakens, let’s review some of the biggest mysteries director J.J. Abrams’ film has to clear up for fans.

1. What was the fallout from the Emperor’s defeat?

Chronologically, The Force Awakens picks up the story 30 years or so after the Rebel Alliance destroyed the second Death Star in Return of the Jedi, thereby foiling the Emperor Palpatine’s (Ian McDiarmid) plot to crush them once and for all. However, the world we’ve seen in trailers for The Force Awakens doesn’t look too much different from that ruled by the Empire. Stormtroopers and red lightsabers abound, which begs the question of exactly how the political landscape of the Star Wars universe changed after Palpatine went tumbling down that reactor shaft. Hardcore fans will no doubt cry that this period was previously covered in novels, comics and other media in what is known as the Expanded Universe (EU), but it has already been announced that this material is no longer canon, leaving a clean slate for the filmmakers to craft a new story. The red and black flags featured in The Force Awakens are reportedly that of a group called the First Order, but we’ll likely have to wait for the film’s release to know who’s really pulling the strings behind it all.

While fans are wondering what happened to the Empire, the Rebel Alliance may be an even bigger mystery. We’ve seen footage of what look like Rebel pilots as well as a breathtaking look at some fan-favorite X-wings in action. Still, little has been confirmed thus far about where we’ll find the main trio of the original films when the opening crawl of The Force Awakens starts up. Rumor has it that Luke Skywalker (Mark Hamill) has been pulling an Obi-wan – complete with Alec Guiness-esque beard – and remained in hiding for decades, perhaps for fear that he might follow in his father’s dark footsteps. Meanwhile, Han Solo (Harrison Ford) and Leia Organa (Carrie Fisher) have presumably been fighting the good fight in his absence. However, if that’s the case, this doesn’t explain what “home” Han is referring to in that most recent trailer. Abrams and company could very well be incorporating elements of the EU, which saw Luke fall in love with warrior Mara Jade as well as Han and Leia’s children playing key roles. At this point, there’s no telling if that’s the case.

For months, fans weren’t even sure which actor was wielding that unforgettable cross-guard lightsaber, but it has since been confirmed that Adam Driver (Girls) will play masked antagonist Kylo Ren, though his history remains under wraps. His mask was reportedly modeled after Darth Vader’s and, considering that Abrams has hinted that the character’s real name could venture into spoiler territory, there’s a good chance that he has strong ties to heroes we know and love. Right now, fans are undoubtedly just hoping that the character is as epic as we’ve been led to believe and that he’s not unceremoniously discarded after The Force Awakens, as Darth Maul (Ray Park) was by the end of The Phantom Menace. How Kylo Ren ties into the battle for galactic control will likely be key to the new trilogy, but making him part of the Skywalker family would continue the franchise’s tradition. The fact that last names were intentionally left out of the character descriptions for Finn (John Boyega) and Rey (Daisy Ridley) might mean that all three members of this new trio have original trilogy ties.

4. How does Darth Vader play into the new films? 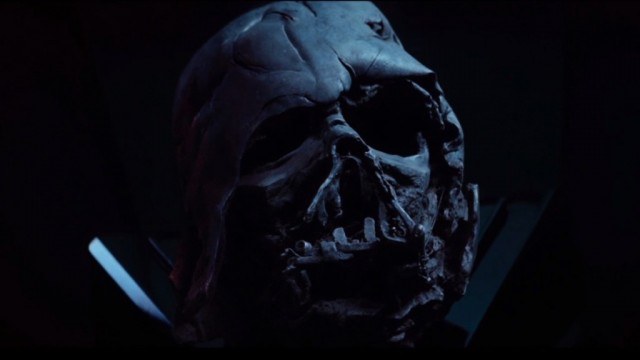 Seeing as The Force Awakens marks the first Star Wars film not to feature Anakin Skywalker (or his Sith Lord alter-ego), it’s curious that footage for the new film includes a shot of his charred mask, presumably found long after the funeral pyre seen at the end of Return of the Jedi. Word that Kylo Ren admires the late Vader would make him the likeliest candidate for that scene, but Luke’s voice-over about how his father has the Force could be a hint that Vader’s story isn’t as finished as we thought. After all, he does appear as a Force ghost by the end of the original trilogy, and James Earl Jones has returned to voice Vader as recently as earlier this year on the animated series Star Wars: Rebels. Moreover, the EU does feature cloning and the return of deceased characters, such as Emperor Palpatine. So a precedent has been set for Abrams to bring Vader back. Add in rumors that WWE star Stephen Farrelly – better known as Sheamus – could play the role, as he has on promotional tours, and it’s impossible to completely discount the chances of a Vader appearance in the new film.

5. Why is the Force awakening now?

The fact that Episode VII is subtitled The Force Awakens in and of itself implies that a long period of inactivity has taken place on both the light and dark sides of the Force. That would seemingly confirm that Luke has been off the grid for a while and not starting up a new Jedi Order as he does in the EU. Moreover, it raises the question of why all this is happening now. Some major event must be in play for the Force to experience such a resurgence, much less one that appears to be affecting both sides (as Andy Serkis’ voice-over mentions in that first teaser). When Yoda passed away in Return of the Jedi, the films left Luke as the last remaining Jedi. His task was to pass on his knowledge so that subsequent generations could learn the secrets of the Force as well, but if Luke hasn’t acted on that because he’s seen the dangers of the Dark Side firsthand, there’s no reason to think that anyone else (except for Kylo Ren?) would start it up again. Perhaps Yoda or other Force users could even return now that it is active once more.

6. Will the film finally settle the “all Stormtroopers are clones” debate once and for all?

The prequel trilogy and animated series Star Wars: The Clone Wars (which is considered canon, according to Disney) established that the Imperial army was comprised exclusively of clones when it first started. After all, in order for Palpatine to take control of the galaxy, it’s a lot easier to commission the creation of an army in secret rather than recruit individuals to join your malicious, universe-conquering cause. However, the differing voices and body types of the stormtroopers in the original films have led to the conclusion that the Empire began to accept new recruits once its initial clone army aged out. Therefore, by the time A New Hope rolled around, there was probably a solid percentage of non-clone soldiers wandering the galaxy. The Force Awakens could – in the films, at least – finally put this topic to rest. In the trailers, John Boyega’s Finn is seen wearing a stormtrooper uniform, and though it remains unconfirmed if he is actually a defected Imperial soldier or simply in disguise (which would actually be a fun callback to A New Hope), the film could wordlessly end years of fan discussion.

When Disney purchased Lucasfilm, the company did so with a clear plan in place. The Force Awakens marks the official relaunch of the franchise on the big screen, but going forward, films are planned to hit theaters each year, alternating between official “episodes” and standalone “anthology” stories set within the Star Wars universe. Therefore, it’s almost certain that the new films will take a shared universe approach similar to Marvel Studios (another Disney-owned property). That means fans could see mid-credits and post-credits scenes in each Star Wars film, setting the stage for adventures to come. The Force Awakens will likely steer clear of teases for upcoming narrative flashbacks like Star Wars: Rogue One (believed to take place around the time of A New Hope) or the in-development film centering on a young Han Solo, but even if we have yet to learn the central plot of The Force Awakens, the film will probably look to what’s coming next in director Rian Johnson’s untitled Episode VIII. Whether that extends to surprise cameos by the likes of Billy Dee Williams or simply a cliffhanger ending that leaves audiences wanting more, expect Abrams to have a trick or two up his sleeve.