‘Star Wars: The Force Awakens’: What You Should Know For Opening Night

Star Wars: The Force Awakens is fast approaching, and anticipation is building every day. Disney and Lucasfilm have skillfully leaked out just enough information over the last few months to keep us intrigued, without giving away anything big enough to spoil the whole movie. Meanwhile, we’ve known for awhile that October 19 would mark the first day for opening night tickets going on sale online. What we didn’t know was how expansive and celebratory they would make that day.

Yes, tickets are still going on sale. Additionally though, there’s a whole lot of other reasons to be excited, including full-day Star Wars movie marathons, and exclusive gear and memorabilia. We have all the information you could possibly need to ensure you don’t miss out on The Force Awakens when it premieres on December 18. 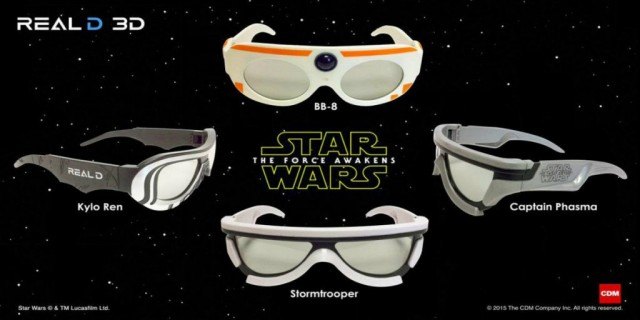 Virtually every major theater is pulling out all the stops to get fans in the front door, offering a whole host of exclusive giveaways and gear. The choice is really up to you, the viewer, in terms of how many times you want to see The Force Awakens in order to capitalize on all this.

AMC Theaters: Following the release on December 18, every Sunday between December 20 and January 1 gives you the chance to score an “AMC-exclusive” Star Wars poster designed by Dan Mumford. Every weekend will mark the release of a new poster and comes free with the purchase of a ticket for that day.

Regal Cinemas: Following the release on December 18, every Saturday between December 19 and January 9, the first 500 tickets purchased will be a collectible Force Awakens version complete with exclusive artwork. The one caveat: It only applies to IMAX tickets, so plan accordingly. A new ticket design will be released every Saturday during the designated period.

Cinemark: It was announced a while back that 3D screenings of The Force Awakens would include special collectible RealD 3D glasses (pictured above). For Cinemark theaters, fans can score the glasses in three ways: attending one of their marathon Star Wars events (more on that soon), attending the opening of The Force Awakens December 17, or purchasing a special Star Wars concession combo.

El Capitan Theatre: It’s not quite a gear giveaway, but what El Capitan lacks in free swag is made up for by its presentation. The Force Awakens will be presented with a “state-of-the-art laser projection system,” which is salesman speak for “it’ll be in super duper hi-def.” For maximum Star Wars cheese, they’ll also feature an “all-new laser lightsaber curtain show,” making us wonder what the problem was with the old laser lightsaber curtain show we assume existed before.

Fandango: Many of you will likely go through Fandango to purchase tickets anyway, automatically entering you into a sweepstakes where the main prize is a trip to the world premiere of The Force Awakens. Purchasing within the first 24 hours of availability affords you additional entries as well. There will be 10 runners-up that will instead win a “Dark Side” or “Light Side” prize pack.

Marvel did something similar leading into the release of Age of Ultron: One theater, a whole bunch of movies, and the relative loss of your sanity should you find yourself unprepared for the occasion. For Lucasfilm the fun kicks off on December 17, with 2D screenings of every Star Wars film beginning with Episode I: The Phantom Menace.

The night closes out with the premiere of The Force Awakens in 3D, giving fans the full 14-hour experience (about half the run-time of Marvel’s marathon for reference). Purchase of a ticket also includes a lanyard with exclusive Force Awakens artwork.

Leading up to the main event in December, Lucasfilm and Disney have released a series of short teasers as well as several domestic and international full-length trailers to whet our appetites. Check each one below and see for yourself: