With Star Wars: The Last Jedi getting tantalizingly close to theaters, Disney is giving us new stuff to analyze practically every single day. Following the official trailer for the movie, we’ve now been given yet another short behind-the-scenes video with a few extra little sneak peaks inside.

We took a look at everything we learned from the behind-the-scenes look at The Last Jedi, plus other recent news and rumors. First up, some revealing quotes that come straight from the mouth of director Rian Johnson.

Courtesy of an interview that Johnson did with USA Today, we have a handful of cool quotes that are somewhat revealing about the future of the characters in Star Wars. Here is what Johnson had to say about the status of our heroes in The Last Jedi:

When I first read the script of The Force Awakens, I was like, “I feel like I know these characters instantly.” And now we get to kind of put them through a meat grinder. (Laughs) And for me, part of that meant that we had to make things as hard on each of them as possible: At least part of the movie, they don’t have their friends around. They’ve got to figure things out for themselves. They’ve got to be faced with whatever the toughest thing each of them can be faced with, and they’re not going to have their buddy there next to them to get them out of it, necessarily.

Continue on for a handful of things you may have missed from the behind-the-scenes reel, plus more thoughts from Johnson on General Leia and The Last Jedi being Carrie Fisher’s final movie.

‘DJ’ in a First Order uniform

Finn with Rose and DJ | LucasFilm

One of the most unexpected things we got in the recent BTS reel was “DJ” (Benicio Del Toro’s mysterious character) alongside Finn and Rose in First Order uniforms. We’ve known for a while that Finn and Kelly Marie Tran’s Rose would be going undercover to infiltrate the First Order for a while, but how DJ would be involved in their storyline has been kept close to the vest by Disney.

To be honest, the glimpse at Del Toro dressed up as a First Order officer was brief and hard to even catch upon first watching. There is something about his character that feels like a massive secret just waiting to come out. Johnson has been coy when discussing his role in the movie, other than to reveal that he’s the Star Wars version of a hacker and a thief.

We don’t even know if DJ is the character’s real name, as Johnson has said in the past that it’s short for something else. Fans have questioned whether DJ could actually be a grown up Ezra Bridger from Star Wars Rebels, but Johnson has dismissed that speculation.

A look at Finn’s bacta suit 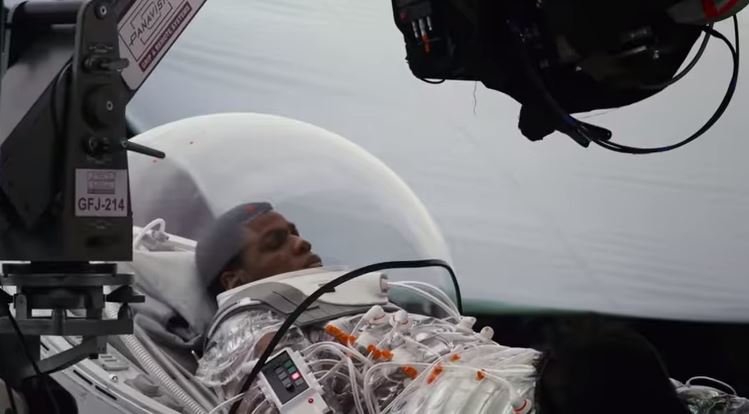 Finn wearing a bacta suit in The Last Jedi. | LucasFilm

Going back to Star Wars: The Force Awakens for a moment, you’ll recall that Finn ends the film by getting a lightsaber up the spine courtesy of Kylo Ren. After Rey defeats Ren on the crumbling Starkiller Base, the pair of heroes are rescued by Chewbacca in the Millennium Falcon. Finn remains unconscious for the remainder of the movie, but it’s implied that he’ll make a full recovery.

With almost no time going by from the end of The Force Awakens to the beginning of The Last Jedi, not much has changed in the early part of the movie for Finn. In the BTS video, we get a shot of him inside what is being described as a “bacta suit,” or a personalized version of the bacta tank we see Luke using to recover on Hoth in Star Wars: The Empire Strike Back. Darth Vader even uses a bacta tank during one of his brief scenes in Rogue One: A Star Wars Story.

The rumor is that Finn is going to come out of the bacta suit not only good as new, but stronger and better than he ever was before. That could lead nicely to the exciting one-on-one battle between Finn and Captain Phasma that the trailer teased.

We know we’re in for a real treat with this next film. | Adrian Dennis/AFP/Getty Images

Here is what Johnson had to say to USA Today about Leia and Poe Dameron, who the General sees as somewhat of a protege.

“Poe’s got to grow. She definitely saw that potential in him and in The Last Jedi, we dig into that more. We’ve seen how heroic he is and now we’re going to see him challenged in terms of stepping up to the next level. It takes more than heroics to be a leader, or so I’m told.”

As for Leia, Carrie Fisher’s tragic passing will make this her final film. That’s not something that Johnson takes lightly.

“Having these scenes in the film recontextualize tragically with her not being here anymore, it’s incredibly emotional. For the next few months, seeing the fans … process the loss and celebrate her as Leia one last time, it’s going to be intense. I think it’s going to be really sad but really joyful, I hope. She really kicks (butt) as General Leia, and I’m happy for that.” 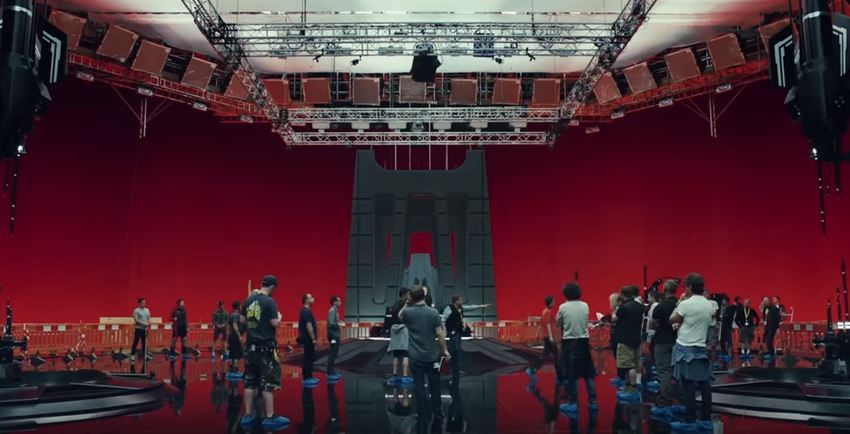 One of the most heavily featured backdrops in the BTS video is the throne room of Supreme Leader Snoke. We catch a few glimpses of the room in the recent trailer, with Kylo Ren picking up a lightsaber off the floor and later Snoke reaching out his arm toward Rey. During the most recent video, we can see two large items off to the side of the room and it is unclear what they’re used for.

Speculation could lead us anywhere, but our guess is that they could be used for holograms. We know that Snoke appeared only via hologram in The Force Awakens, so maybe these two metal platforms with machinery around them are used to see the subjects on the opposite end – Kylo Ren and General Hux, for example.

But an interesting rumor involving Emperor Palpatine could also somewhat explain what they’re used for. It has yet to be confirmed, but some believe that we will get a scene in The Last Jedi where Snoke plays a hologram message from the long-deceased Palpatine. That would certainly be a jaw-dropping moment.

Some brand new toys for The Last Jedi have recently revealed some of the dialogue for the film, according to Corey of Making Star Wars. Here are a handful of lines spoken by key characters.

Leia: “Together, we can defeat the First Order,” “May the Force be with you,” “Send them in,” “I will do everything I can to help,” and “All troops open fire!”

The eagle-eyed Star Wars fan will notice that some of these lines were said in The Force Awakens, so they may not be pulled directly from The Last Jedi. But at least for DJ and Luke, some of this dialogue gives us a peak into their roles in the upcoming movie.

We can’t wait for a new trailer to drop. | Lucasfilm

According to prominent YouTuber Mike Zeroh, the recent trailer won’t be the final look that we get ahead of the release of The Last Jedi. Rumor has it that an international trailer is on its way very soon, and could be released as soon as Friday, Oct. 27. That makes sense, again according to Zeroh, because it follows a similar pattern for The Force Awakens and Rogue One.

With everything that we have going on with Star Wars, it’s hard not to be excited right now. The Last Jedi is on its way, Solo: A Star Wars Story is due just six months after that, Rebels is wrapping up their fourth and final season on Disney XD, and new announcements about the future of the franchise on television and with the anthology films will be on the way shortly. For the Star Wars fan, what a time to be alive.