‘Star Wars: The Last Jedi’ Is the Movie Fans Have Been Hoping For

Star Wars: The Force Awakens got fans excited again for Star Wars. It also launched new characters in this world and revisited the old ones. There are many questions about where this story will go, and they are about to be answered in Star Wars: The Last Jedi.

We won’t be giving away any of those answers here. Rest assured, this review is totally spoiler-free and does not give away any major plot points of the movie. Instead, we’re delving into some questions fans have about the movie —  like if it lives up to expectations.. The answer is yes, and here are seven reasons why.

1. Our heroes and villains grow

The Force Awakens had the tough job of trying to win over Star Wars fans after they had been burned with the prequels. The risk was with the new villain being Kylo Ren, who is emotional, young and wants to live up to what he thinks Darth Vader was. Then there is Rey, who is roped in to go on an adventure.

The new characters had a great start in The Force Awakens, with the help of the original cast members. But can they do it again in The Last Jedi? The answer is yes. The new characters and the original ones all see new growth in this new installment, and you leave caring for all of them.  The performances from Adam Driver and Daisy Ridley, in particular, are amazing.

The supporting cast is not only growing in number, but also in character development — which brings me to the new additions.

We are getting even more new characters in this movie, so it’s understandable fans are wondering if they can hold their own. Thankfully, Laura Dern and Kelly Marie Tran’s performances are fantastic, and their characters are fully formed. 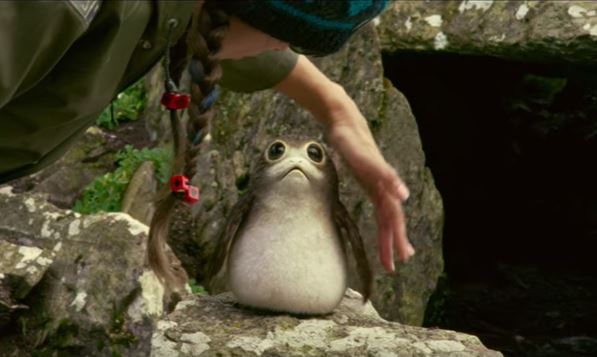 Fans have definitely been intrigued by these new creations since photos and videos have been released. The cast has also been having fun with them on social media. John Boyega thinks porg soup would be delicious, and Mark Hamill find people’s lack of porg adoration disturbing.

But some have been worried because Star Wars has gone all adorable before with Ewoks. The creatures were considered by many as a cash grab and another marketing opportunity. But for those who are anxious, fear not. Porgs are actually adorably funny.

4. All of your questions will be answered

The next film will answer your most anticipated questions. | Lucasfilm

The Force Awakens left audiences happy, but also with a lot of questions. So will you still have those same questions after The Last Jedi?

You can relax, because this movie will answer many questions and have you leaving the theaters satisfied. It may also have you creating new theories.

5. The movie will appeal to your sense of nostalgia

When the franchise was brought back, it really knew how to hit the right notes for Star Wars lovers. This movie does the same, featuring plenty of callbacks, paying homage to the original movies, and more.

But it’s not just fan service. This movie film also does its job in pushing the franchise forward.

You’ll want to rewatch some of the previous films. | Lucasfilm

Rogue One is a standalone movie, and although many fans enjoyed it, some wondered if it really needed to be created. But the release of Rogue One before The Last Jedi actually made a lot more sense to me after watching the newest movie.

The way in which Rogue One took the franchise to a new place influenced my expectations of The Last Jedi and what could be possible for the future.

7. Fans will leave with hope for the franchise’s future

For those who are wondering if The Force Awakens was a fluke, then you’ll leave The Last Jedi reassured it was not. This trilogy is good — and the next one might bring it to new heights.

Check back for our spoiler review after Star Wars: The Last Jedi‘s official release on Dec. 15, 2017.