‘Star Wars: The Last Jedi’: The 1 Deleted Scene We Really Wish Made It Into the Movie

The blu-ray release of Star Wars: The Last Jedi reveals a whole collection of scenes that were deleted from the film, and while some of them aren’t that significant, there are a few excellent ones that would have really improved the movie. In fact, one is so good that it absolutely kills us that Rian Johnson cut it out.

Let’s take a look at the deleted scenes from The Last Jedi, deciding whether each one should have stayed in and culminating in the one that we think definitely should not have been removed. 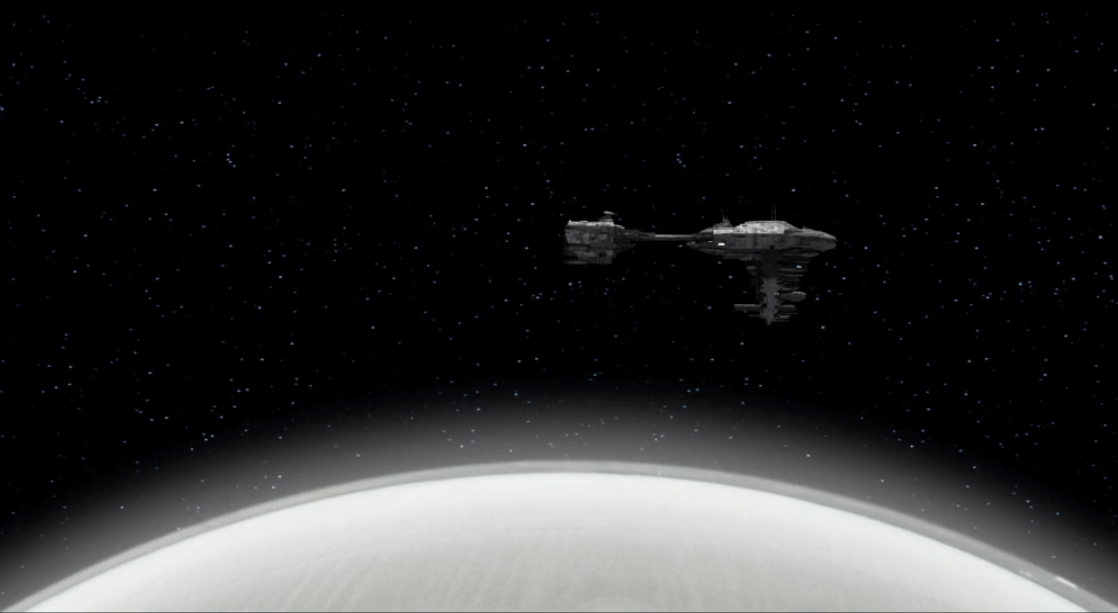 The alternate opening to The Last Jedi. | Lucasfilm

The original opening of the movie would have been a change of pace for Star Wars.

Johnson’s idea was to pan down from the crawl to what we thought was a planet, only to reveal that it’s actually just the top of Finn’s medical pod. Finn wakes up and shouts for Rey. He then gets up and looks out the window to see that there’s a lot of commotion going on, and from there, the opening would unfold basically like it does in the theatrical version.

This alternate opening is clever, but Star Wars should start off with a bang, and this one is just far too subdued; it would have ground the movie to a halt instantly. Therefore, getting rid of it was a good move on Johnson’s part.

Next: We wish Johnson had kept this moment between Finn and Poe.

9. Finn and Poe have a quick chat, and Poe gives Finn his jacket back 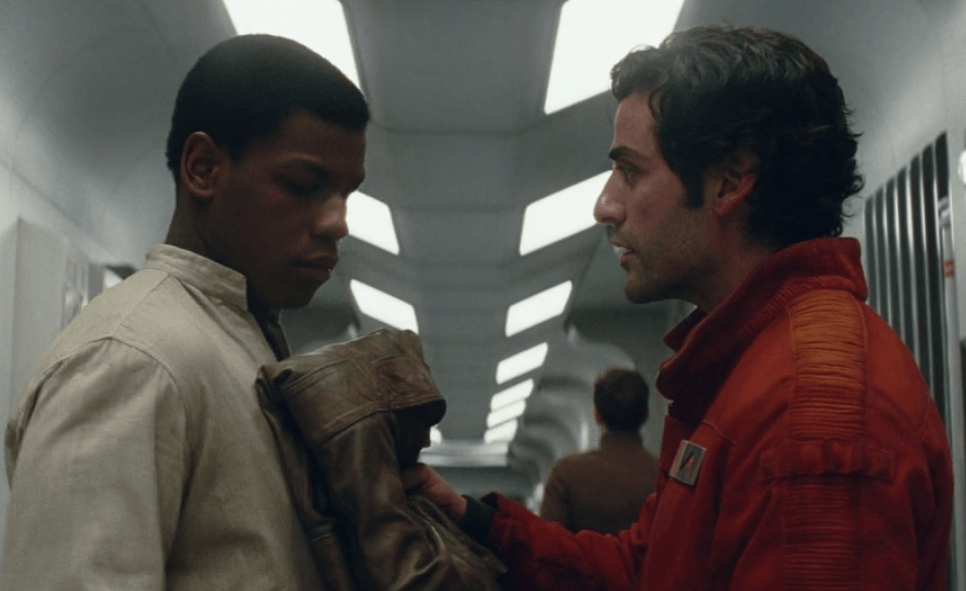 Finn and Poe in a deleted scene from The Last Jedi. | Lucasfilm

Sadly, Finn and Poe don’t get to spend that much time together in The Last Jedi. However, they did have one additional moment that was cut.

In this deleted scene, Finn asks Poe why it doesn’t feel like they’ve won even though Starkiller Base has been destroyed, and Poe says that it didn’t take long for the First Order to find their base. Finn expresses hesitation when Poe acts like he’s part of the Resistance, saying he never joined this army. But Poe tells Finn that this is where he belongs. Finally, Poe gives Finn back the jacket he was wearing at the end of The Force Awakens, explaining that he sewed it up.

This scene isn’t totally necessary, but it still would have been nice to have. For one, it addresses a feeling a lot of fans had at the start of the movie: that it’s weird how the destruction of Starkiller Base no longer seems like it was a big victory when it was played as one at the end of The Force Awakens. It also further establishes Finn’s hesitation with being part of the Resistance and explains why he’s suddenly wearing a jacket that was cut in half in the previous movie. We’re not super upset that Johnson deleted this scene, but ideally, we’d like to have seen it stay.

Next: This additional scene between Finn and Rose could have stayed, too.

8. Finn and Rose decide to go to Crait 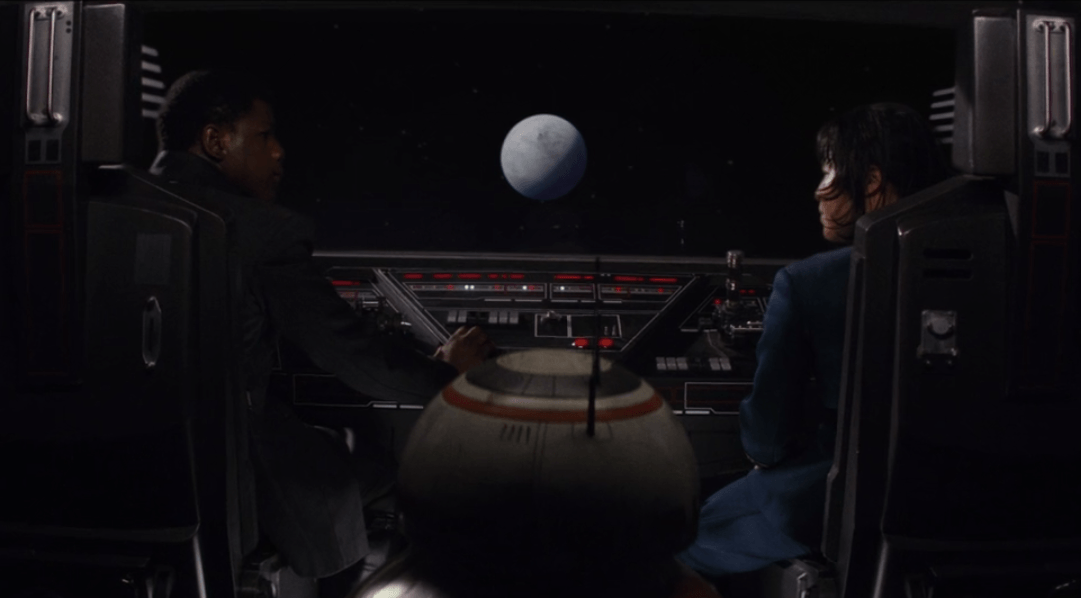 In this very short deleted scene, we see Rose and Finn fleeing the Supremacy after the Captain Phasma fight. Rose asks where they’re going, and Finn says, “where we belong,” referencing Crait. This would have been a callback to the previous deleted scene, in which Poe told Finn he belongs with the Resistance.

This scene is only about 20 seconds, and it would have been nice to have in the movie if only to get a bit more Finn. You may have noticed that every single deleted scene so far involves Finn in some way. Indeed, John Boyega is the actor who appears to have suffered the most from decisions made in the editing room.

Next: Rose unexpectedly takes on General Hux in this deleted scene. 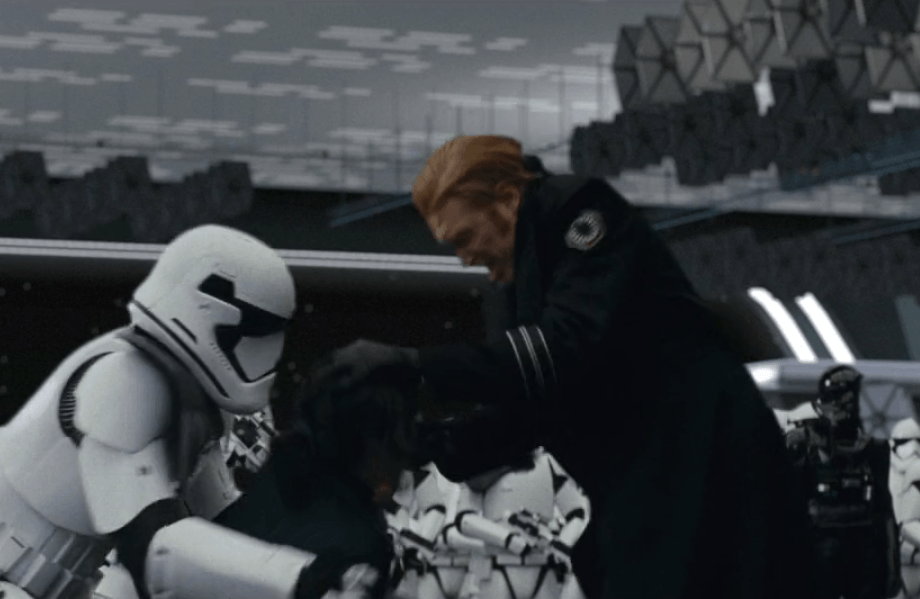 After DJ has betrayed Finn and Rose, there was originally a moment when Hux takes Rose’s medallion and taunts her. As Hux has his hand on Rose’s chin, she suddenly bites his finger. He screams out in pain, struggling to get his hand free before ordering her and Finn to be executed.

Next: One of the big sequences in the movie was originally even more involved. 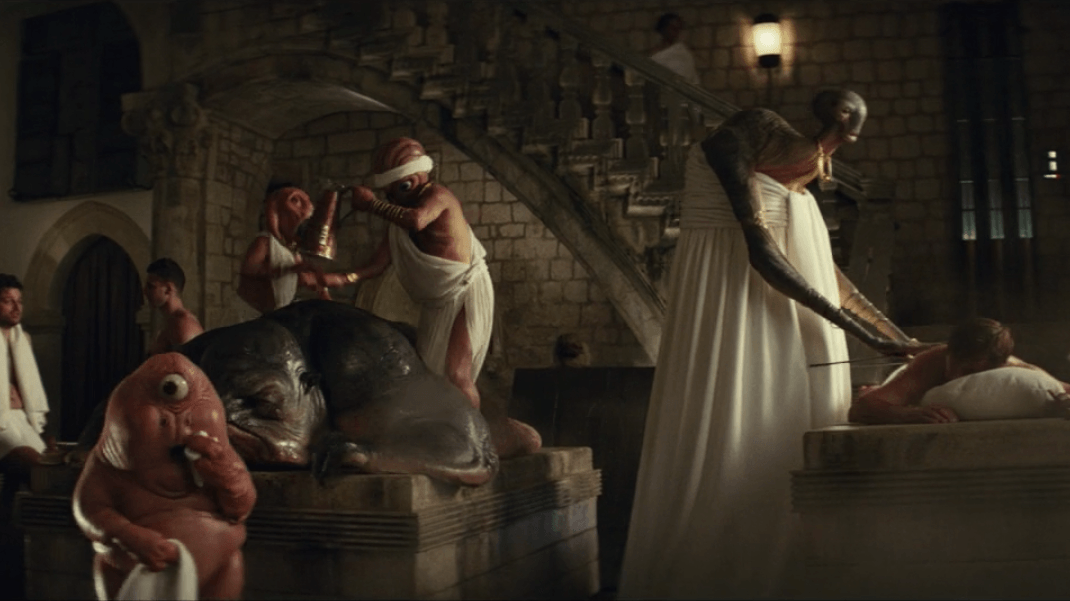 There were some complaints about the Canto Bight chase sequence, with certain viewers feeling like it was too long and a bit superfluous. But believe it or not, the version in the movie was severely trimmed down: the original cut of it was over five minutes.

Johnson kept the most important beats of the chase in the movie, but he cut a bunch of individual moments out. For example, in the original version, Finn and Rose crash into a sauna, and one particular alien loses his towel and crawls on the floor naked. There are also some additional shots of destruction around the city, and a few extra lines for Finn and Rose, such as Finn shouting “I hate these guys!” in reference to the Canto Bight police. At one point in this version, the Fathiers run alongside a cliff, and one of them actually gets shot down and presumably dies.

Cutting this down was probably the wisest decision Johnson made in the editing room. This original version is just far too lengthy and gets boring fast. Considering people had complaints about the final edit, just imagine how this one would have gone over.

Next: This sweet moment would have been a callback to a scene in The Force Awakens. 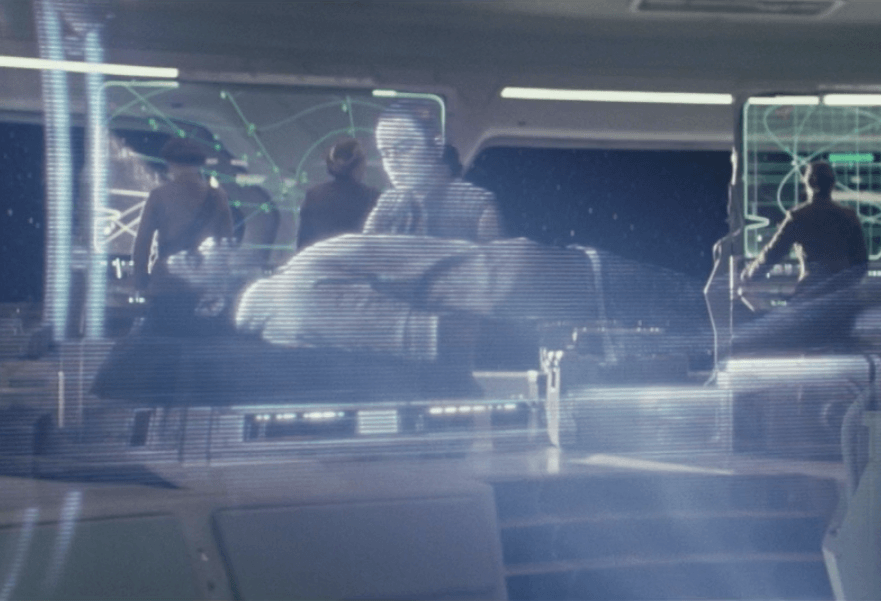 Finn watches a recording in The Last Jedi. | Lucasfilm

Early on in the movie, there was originally a scene in which Finn is sitting by himself on the Raddus, holding the beacon and trying to decide what to do. BB-8 tries to cheer him up, showing him a video of Rey kissing him at the end of The Force Awakens. Finn immediately looks at the beacon and comes to a decision. The suggestion is that this is what inspires him to leave the Raddus and get to a safe place where Rey can find him.

It’s a sweet scene that effectively ties into The Force Awakens, and there’s an amusing beat where Finn tells BB-8, “it’s kind of weird that you recorded that.” Ultimately, Johnson decided that this was not totally necessary since we would understand Finn’s motivations without it. But especially since Finn and Rey don’t interact at all in The Last Jedi until the very end, we would have preferred for Johnson to have kept this.

Next: Johnson says this is his absolute favorite of all of the deleted scenes.

4. Finn runs into an old friend 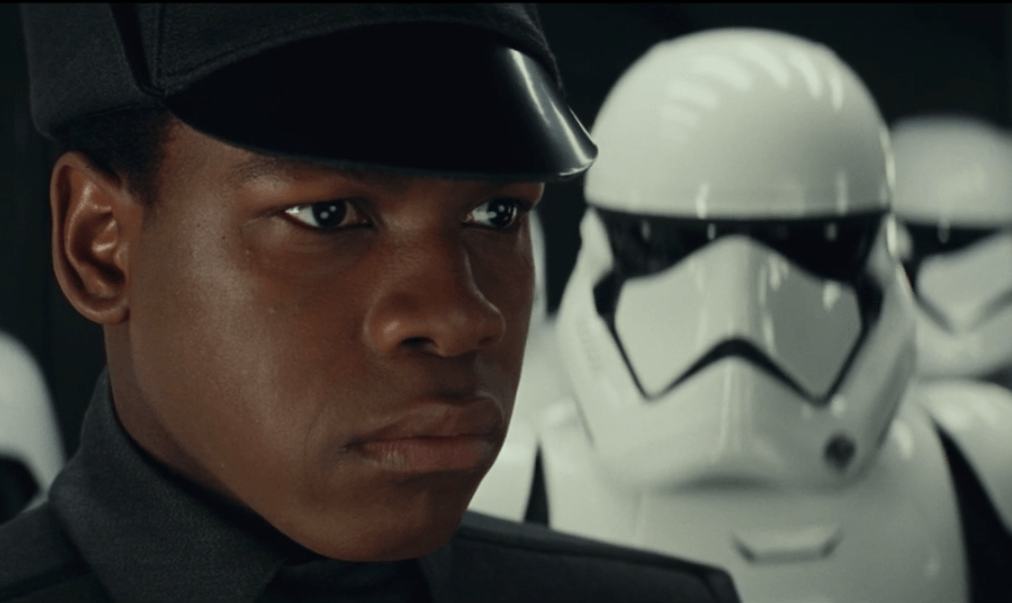 An old friend recognizes Finn in a deleted scene from The Last Jedi. | Lucasfilm

On the commentary, Rian Johnson describes this as his favorite deleted scene.

In it, while Finn, DJ, and Rose are sneaking aboard the Supremacy, they get into an elevator and a stormtrooper recognizes Finn from back when he was FN-2187. Rose reaches for her gun, and everyone tenses up thinking the stormtrooper is going to turn them in. But instead, he just congratulates Finn on being promoted, apparently having not learned that FN-2187 deserted.

Although the scene is effective, it ultimately doesn’t really end up amounting to much. It’s basically just a really long buildup to a joke. So in a movie that’s already two-and-a-half hours long, it made sense to cut this one.

Next: This scene being in the movie would have alleviated a major complaint. 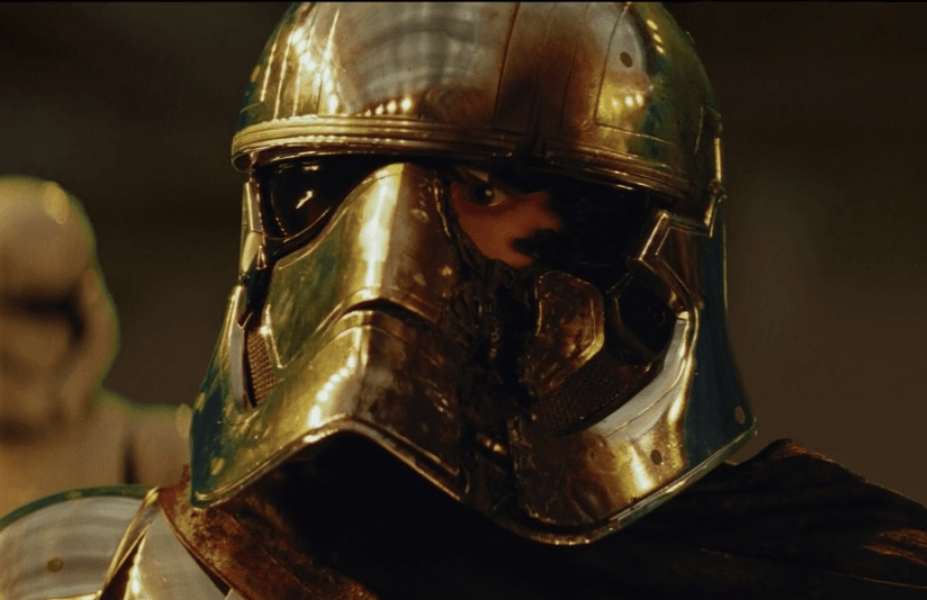 Captain Phasma in a deleted scene from Star Wars: The Last Jedi. | Lucasfilm

One of the complaints about The Last Jedi was that Captain Phasma was once again severely underutilized. Well, she did originally have more to do.

In the early cut, the fight between Phasma and Finn was a bit more involved. Finn reveals in front of all of the stormtroopers that Phasma was a coward who turned off the shields on Starkiller Base. The stormtroopers then start lowering their weapons and looking around at one other, clearly questioning their willingness to follow Phasma’s orders, only for Phasma to shoot them all dead with her blaster.

This scene would have been great to see in the movie, giving Phasma an opportunity to be a badass and tieing things back to The Force Awakens more. The only flaw is that in this version, John Boyega’s delivery of the line “rebel scum” at the end is not nearly as good of a take as the one in the completed film. Ideally, we would have liked to have seen a combination of this version and the version in the movie.

Next: This scene would have alleviated a complaint about Luke’s character. 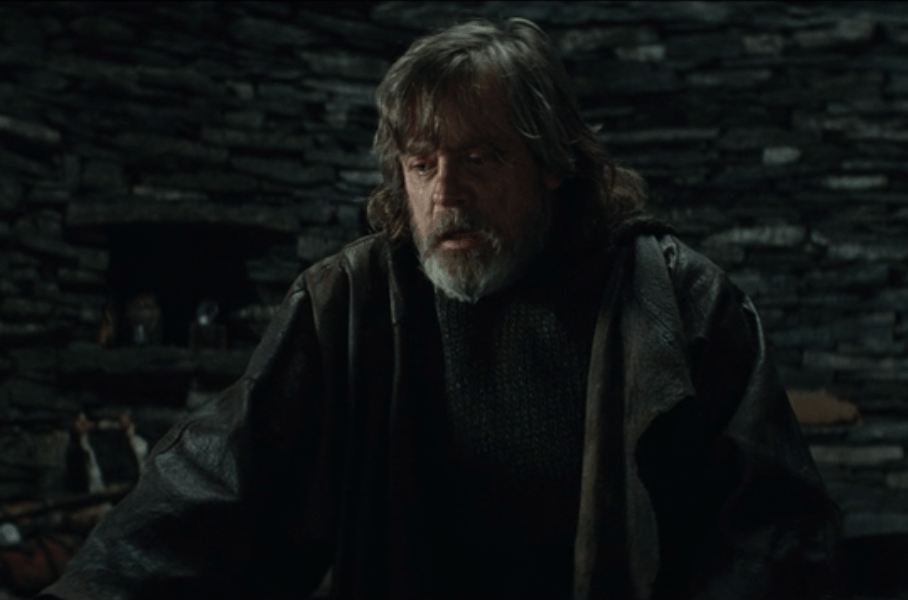 Luke in the deleted scenes of Star Wars: The Last Jedi. | Lucasfilm

In the finished movie, after Luke asks Rey if she thinks he came to the most unfindable place in the galaxy for no reason at all, he goes back into his hut, and that’s the end of the scene. But originally, there was a brief moment where we see Luke inside having some time to himself; he looks heartbroken as he puts his hand on the table and sheds a tear.

The implication is that Luke is mourning Han, something we don’t see in the final version; Johnson just cuts away after Luke asks what happened to Han. A common grievance with The Last Jedi is that Luke is too mean and cold throughout the first half, but keeping this scene in there might have solved that problem. Johnson says in his commentary that this was cut purely for pacing reasons.

Next: This is the scene we really think should have stayed in the movie.

1. Rey and the caretaker village 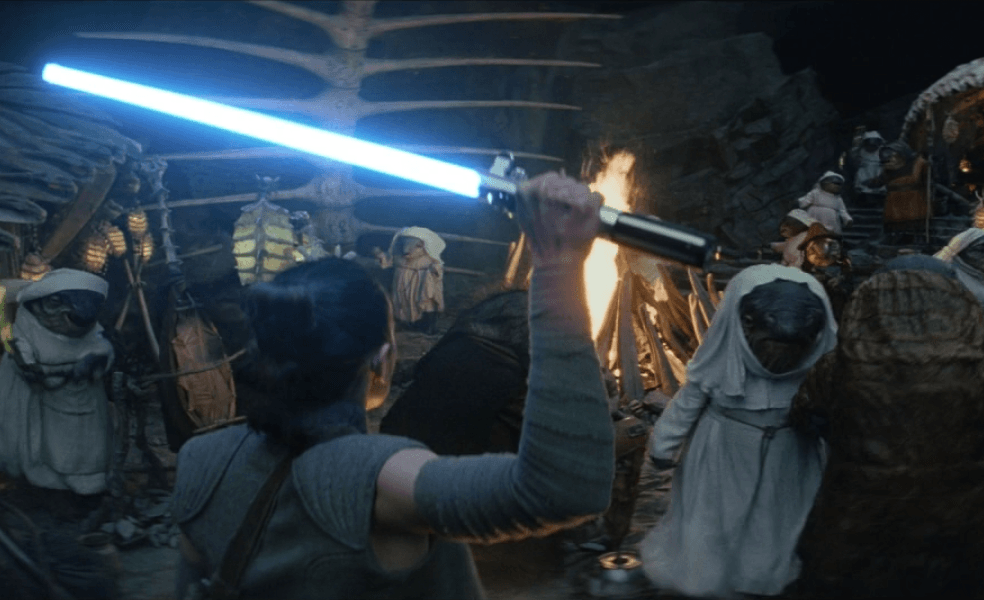 This great scene would have taken place right after Rey tells Luke, “Kylo failed you. I won’t.” In the original cut, after Rey says that, she hears some noises outside, looking out to see a fire off in the distance. Luke tells her that a tribe from a neighboring island comes once a month to raid and plunder the caretaker village. Rey wants to help, but Luke tells her that a true Jedi Knight would not interfere.

Rey ignores Luke, rushing in to help the caretakers. But when she arrives, she discovers that the caretakers are just having a party; there’s no raid happening. Rey then finds Luke outside, and he laughs, saying he didn’t realize she was going to run off so fast. He explains that the lesson is that the Resistance needs someone like Rey who rushes in to help, not some failed religion like the Jedi. But Rey is livid, saying that while they’re wasting time here, their friends are dying. Luke appears to be genuinely affected and remorseful, which leads into the moment in the actual movie where he connects with the Force.

In addition to just being fun — there’s a hilarious moment where Rey runs into Chewie and R2 at the party and asks, “seriously?” — this sequence showcases some powerful acting on the part of Mark Hamill and Daisy Ridley. Additionally, it effectively sets up the fight between Luke and Rey not long after, and it sheds more light on Luke’s feelings about the Jedi Order. Johnson says he cut this out for pacing reasons, but from now on, every time we watch The Last Jedi, we’re going to really wish this sequence were in there.