‘Star Wars’: Essential Things That Have to Be in the Han Solo Movie

Since the release of Episode VIII: The Last Jedi last year, we’re gearing up for 2018’s standalone Han Solo movie. Alden Ehrenreich will star as the iconic smuggler in his younger years, taking us all the way through his origin story.

Thankfully, Rogue One: A Star Wars Story already provided us with a proof of concept for the anthology series too. With Ron Howard on board as director, there’s a whole lot to hope for once Solo: A Star Wars Story hits theaters. What exactly are we expecting to see though? We have some thoughts on that.

Han and Chewie in Star Wars: The Force Awakens | Lucasfilm

Han Solo and Chewbacca’s friendship is famous in Star Wars lore. It’s one of the most powerful partnerships in the galaxy, with the two forming a bond over decades of traveling together. It’s also no coincidence that they stayed attached at the hip for so long. Sometime back in Han’s younger years, he freed the Wookiee from Imperial enslavement on Kashyyyk. As a result, Chewie swore a Wookiee life debt to Solo, putting him at the smuggler’s side to protect and defend him for the rest of his days.

The thing is, even after Chuck Wendig’s Life Debt novel last year, we still don’t know the exact circumstances of how Han first came across Chewie, or what it was that even brought him to Kashyyyk in the first place. With his standalone Anthology movie, we have an opportunity to get some much-needed background into the early days of what would become a powerful partnership.

Getting some insight into Chewie and Han’s relationship is only the tip of the iceberg when it comes to the smuggler’s origin story. Lest we forget, Lando Calrissian is also one of Solo’s oldest friends, who we’ve already seen kicking around the galaxy pre-Episode IV in the animated Star Wars Rebels TV series. Donald Glover has been cast to play the smooth-talking gambler, and Lucasfilm couldn’t have picked a better actor for the job. Hopefully soon, we’ll get to find out just how far back Han and Lando really go. 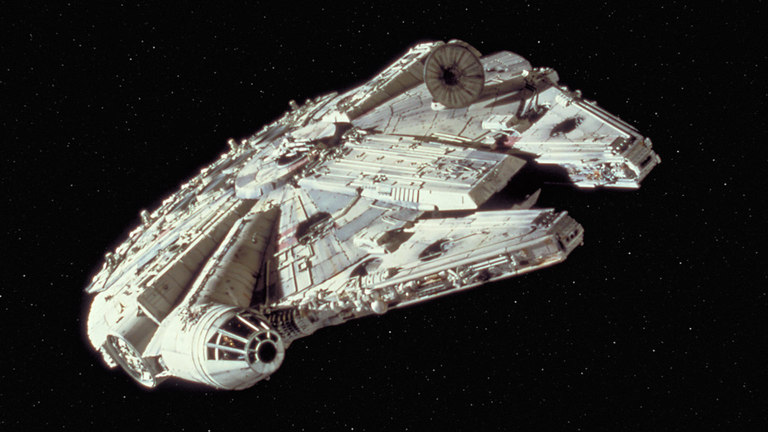 This one will likely come hand-in-hand with Han first encountering Lando, especially given their history together. Based on what we know from what remains of the original Star Wars canon, Han won the Millennium Falcon off of Lando in a game of Corellian sabacc, a twist on a popular card game played on Solo’s home planet. To this day, Han keeps the golden dice he used to win the Falcon hanging in the cockpit of the ship (appearing as recently as Star Wars: The Force Awakens). Suffice it to say, it’d be exciting to see that famous round of sabacc firsthand. 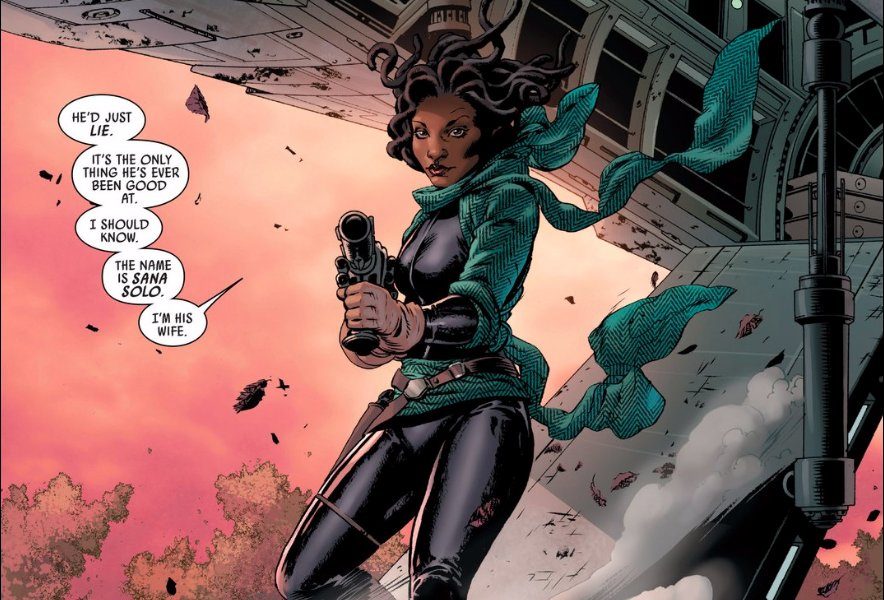 Marvel’s most recent collection of comics have given us tons of new stories involving our favorite Star Wars characters. It’s in the Skywalker Strikes series where a thematic bomb is dropped, revealing that Han, in fact, has a wife named Sana Solo, who’s tracked him across the galaxy to bring him home.

There’s an explanation for the two’s alleged wedding that we won’t spoil for you here, but it would make for one hell of a story in the Han Solo Anthology movie. Incidentally, Lucasfilm was reportedly casting for a female lead for the film, with the leading candidates all bearing a striking resemblance to Sana. 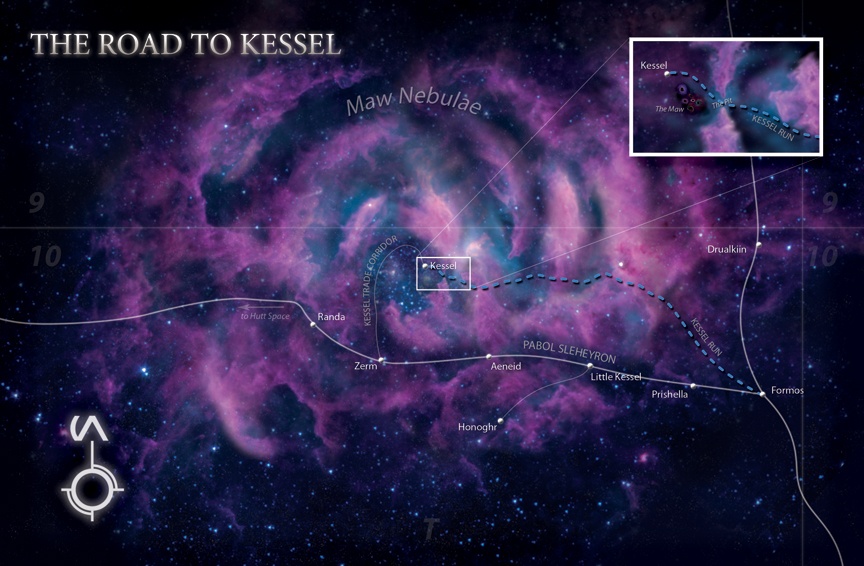 One of Han Solo’s biggest claims to fame within the Star Wars universe involves him having made the Kessel Run in less than 12 parsecs. While many have pointed out that parsecs are a measure of distance (not time), there’s actually an explanation for that, coming to us courtesy of Wookieepedia: “(The Kessel Run) involves several extreme changes in velocity in order to jump to, and drop out of, light speed with the minimum time spent out of hyperspace while making drops, pick ups or tight turns.”

What that means in layman terms is that the shorter the distance you travel the Kessel Run in, the more skilled a pilot you prove yourself to be. Now, imagine a gripping flight sequence where Han and Chewie navigate the route. It’d certainly make for some heart-pounding sci-fi cinema. 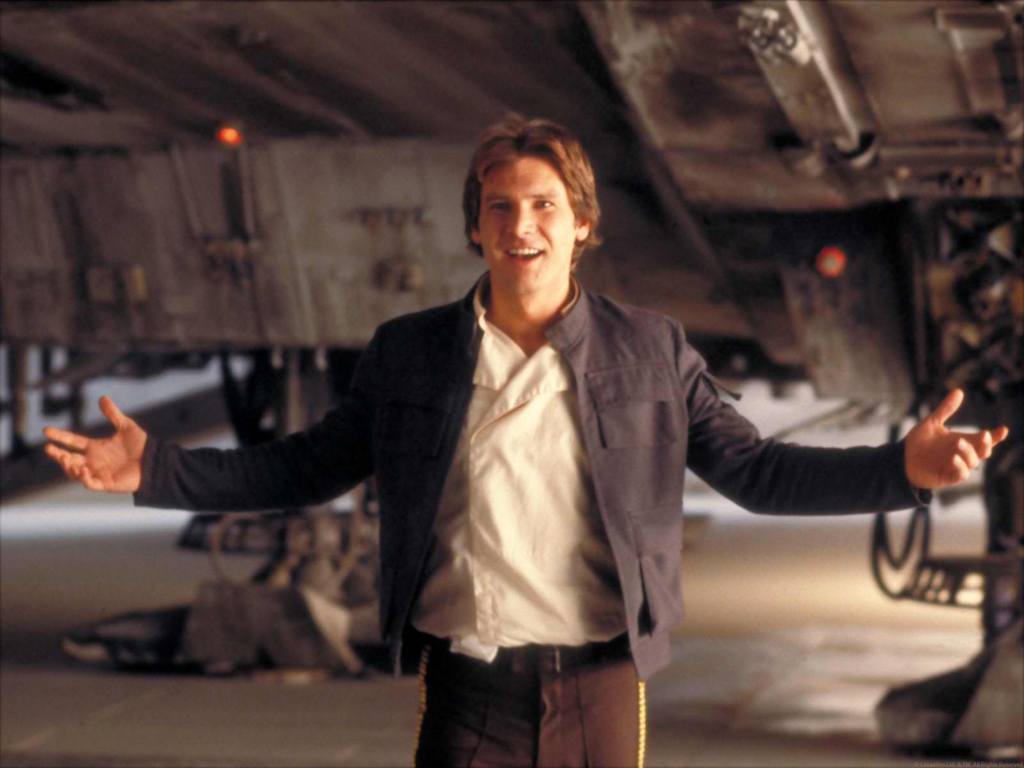 The yellow piping on Han Solo’s pant-legs in Star Wars: A New Hope wasn’t simply an aesthetic design choice by the smuggler. It was in fact, a Corellian Bloodstripe, a military award given to Solo by the military arm of his home planet of Corellia. According to Wookieepedia, the Bloodstripes were typically “awarded for courage under fire,” and allegedly made it so “a Corellian was entitled to kill—without repercussion—any other Corellian or non-Corellian caught wearing them that hadn’t earned them.”

Even after a handful of movies, comics, and novels, we still don’t know how Han earned his own Bloodstripes. That leaves the standalone Solo movie plenty of room to fill in the blanks, and a unique opportunity to paint a vivid picture of our titular smuggler’s true heroism.

In many ways, Rogue One gave us the best version of Darth Vader we’ve ever seen in a Star Wars movie, providing him a measure of bad-ass redemption after his decidedly more toothless performance in Star Wars: Return of the Jedi. Han Solo has an opportunity to give Boba Fett a similar level of redemption, especially given his own disappointing death in Return of the Jedi.

It doesn’t have to be a huge role either. Something as briefly effective as Darth Vader’s hallway scene in Rogue One would certainly suffice, restoring the infamous bounty hunter’s reputation as one of the galaxy’s most feared villains.

8. Diving into the Star Wars underworld 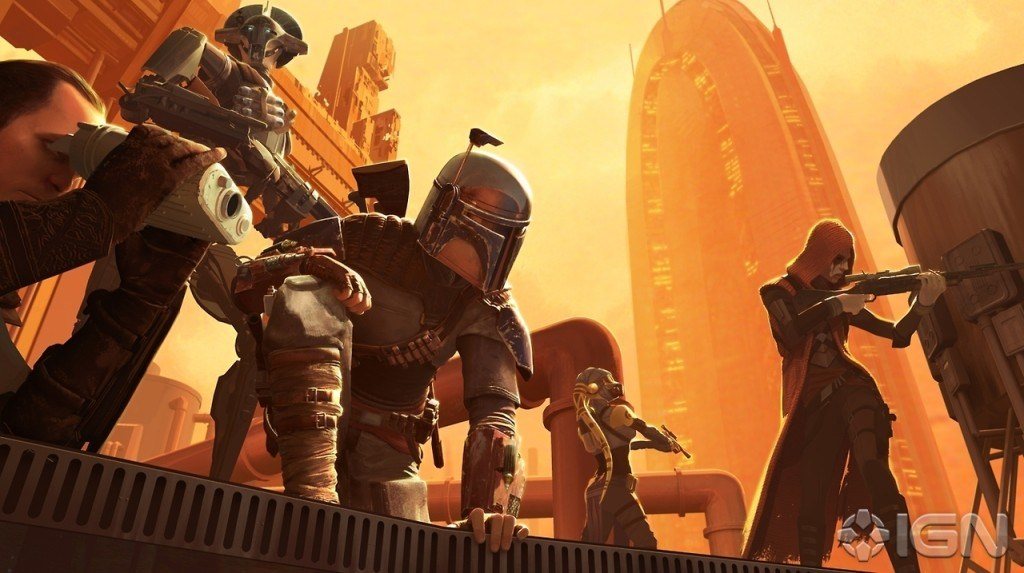 Sure, Han Solo is generally viewed as a good guy in the original trilogy. That being so, he’s also a renowned smuggler and criminal, and getting some background into that carries tons of potential entertainment value.

Getting a peek into Solo’s less-savory days would also afford us an intriguing starting point for a character we know becomes a true hero when it’s all said and done. As the cantina scene in A New Hope indicates (no, Greedo didn’t shoot first), Han is surprisingly complex for someone who claims to be a simple guy just trying to make his way in the galaxy.

9. Running afoul of Jabba the Hutt 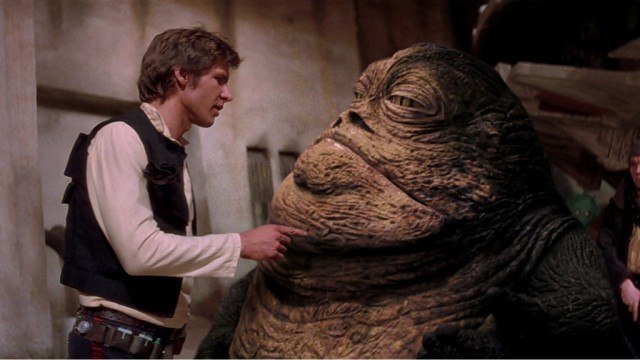 We know Han put himself in hot water with Jabba the Hutt when he dumped his cargo during a smuggling operation. We even know it was because he was boarded by Imperials. What we’re not entirely apprised of are the exact circumstances. Why would a fearless, smooth-talking smuggler simply offload his entire cargo at the first sign of trouble, especially knowing the consequences of crossing Jabba?

There has to be a good reason we simply haven’t seen yet, and Solo has a chance to give us just that.

10. Taking us all the way up to the Mos Eisley cantina 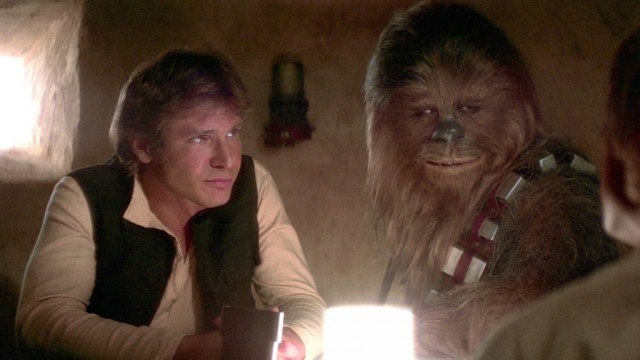 Han and Chewie in Star Wars: A New Hope | Lucasfilm

Part of what made Rogue One‘s ending so apt was the way in which it threw us directly into the events of A New Hope. Solo could accomplish a similar goal.

There would be a certain poetry to the film closing out with Han and Chewie walking into the Mos Eisley cantina, directly before Obi-Wan and Luke approach them with that fateful final job.