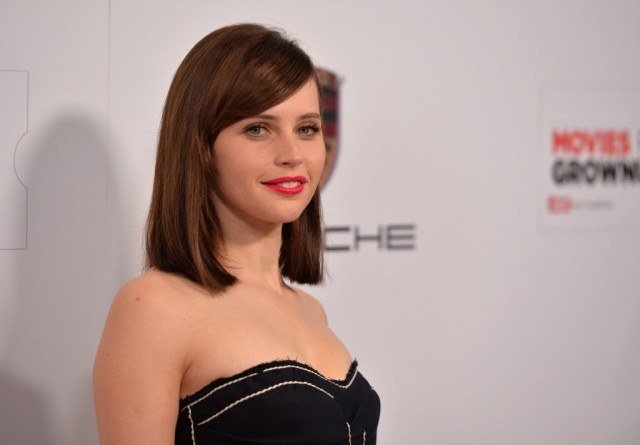 The Star Wars stand-alone film has just found its female lead. According to the Hollywood Reporter, Oscar nominee Felicity Jones is officially in talks with Lucasfilm and Disney to star in the project, after beating out several other critically acclaimed actresses for the highly coveted role.

The news comes only days after rumors started swirling that Orphan Black’s Tatiana Maslany had landed the lead. Per THR, Maslany was one of the actresses in contention for the part, along with Jones and The Girl with the Dragon Tattoo’s Rooney Mara. But after an extensive series of readings and tests that took place last week, the studios reportedly ended up making Jones their top choice.

Disney has yet to confirm or even comment on the casting decision, although that shouldn’t come as a surprise, given all of the secrecy surrounding the project. So far, we know next to nothing about the forthcoming film, other than that it’s set in the Star Wars universe and will stand outside the narrative of the original six films and the seventh due out later this year. It’s unclear which of the characters the stand-alone movie is even focusing on or who Jones would play, should she officially sign on.

What we do know is that Gareth Edwards (Godzilla) will direct a script penned by Chris Weitz (About a Boy, the upcoming Cinderella remake). Weitz was just hired last week to revise the first draft penned by Gary Whitta, who has since left the project.

The film is still working on rounding out the rest of its cast, including a male lead to star opposite Jones. THR reports that Breaking Bad’s Aaron Paul and Carlos’s Edgar Ramirez are both on the short list to take on a role in the film.

The starring role in the Star Wars film would signify a new level in Jones’s career. After first breaking out in the 2011 indie Like Crazy, the actress has steadily been making her way into mainstream Hollywood over the last couple of years. Though Star Wars would mark her biggest blockbuster role to date, it wouldn’t be her first gig in a well-known franchise. She previously appeared as Felicia Hardy in 2014’s The Amazing Spider-Man 2.

Most recently, the British actress has received critical acclaim for her portrayal of Jane Hawking in the 2014 biopic, The Theory of Everything – a role that put her squarely in middle of this year’s awards season run. At this year’s Oscars, she will face off against the likes of Reese Witherspoon, Julianne Moore, Rosamund Pike, and Marion Cotilliard in the Best Actress category.

Jones’s standalone movie is one of two planned Star Wars spinoffs currently in the works. Chronicle director Josh Trank is also developing a separate Star Wars film, which is rumored to focus on the early days of original characters Princess Leia and Han Solo.

The still-untitled Star Wars movie is scheduled to hit theaters nationwide on December 16, 2016. In the meantime, Jones has two other movies scheduled to come out this year: the mystery thriller True Story, which just premiered at Sundance, and the upcoming action flick, Autobahn. She is also set to star alongside Tom Hanks in the adaptation of the Dan Brown novel, Inferno.