The zombie show tries to be realistic while telling its story, but like most shows, it’s not always successful. There are several things about The Walking Dead that don’t make any sense. However, things like makeup and costumes make the characters look gritty, just as they would look if they had to fight for their lives every day. This gritty look involves the characters being covered in blood and guts in order to blend in with the walkers.

It’s clear that the cast doesn’t look glamorous while doing their job. Some stars actually change their looks so much that they are practically unrecognizable off-screen. So what do the cast members really look like? Here is what 25 of the stars of The Walking Dead look like in real life. 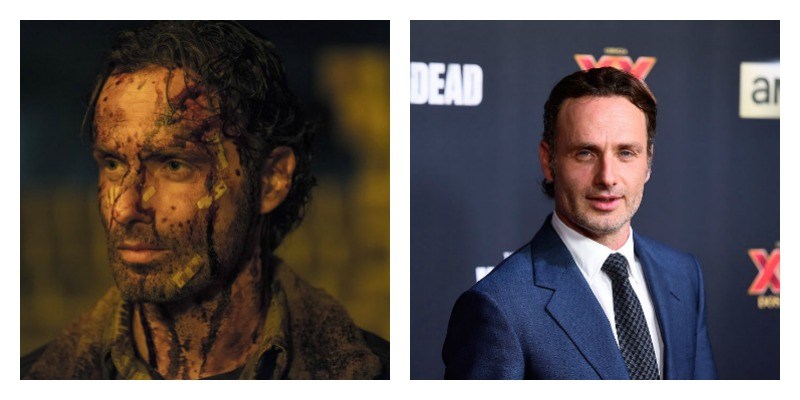 As the lead of the show, the actor has gotten into many messy situations. He also typically has to have longer hair and a bit of facial hair for the role. But during his off time, he seems to keep his look more clean cut.

In fact, after growing a beard for the role and then shaving it, Lincoln’s fellow cast member kept it as a souvenir. “You know what’s crazy is I have his beard in a ziploc bag in my refrigerator,” actor Norman Reedus said at Walker Stalker Con. “True Story.” That seems like a perfectly normal relationship between coworkers! 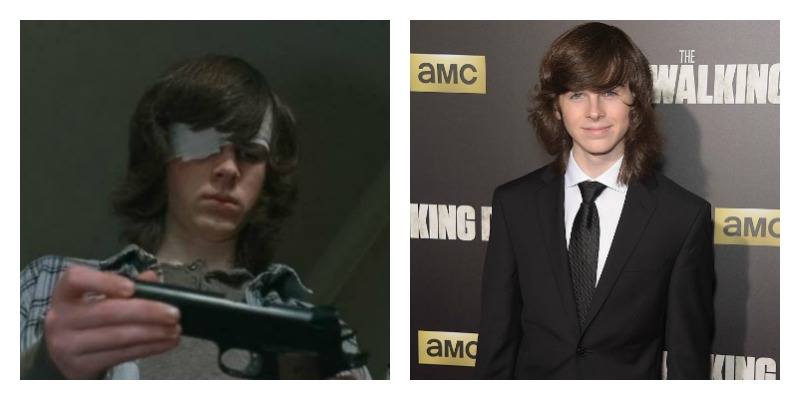 The actor started on the show when he was 10 years old so he has changed a lot physically on the show. Part of that includes growing out his hair. The young actor keeps his hair long even during his time off of the show. But given that his character now has just one eye, his on-screen look will probably start to look much more different in the upcoming seasons. Either way, he knows how to clean up! 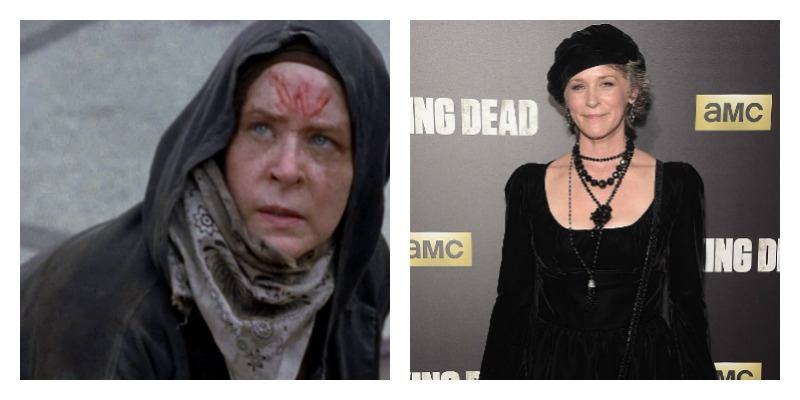 The character starts off as an abused wife and mother of a young girl. Since then, she has transformed into one of the toughest characters on the show. Carol really jumps back and forth between getting dirty in order to get the job done, and pretending to come across as harmless when cleaned up. Off-screen, she looks pretty much the same except in much cooler clothing. 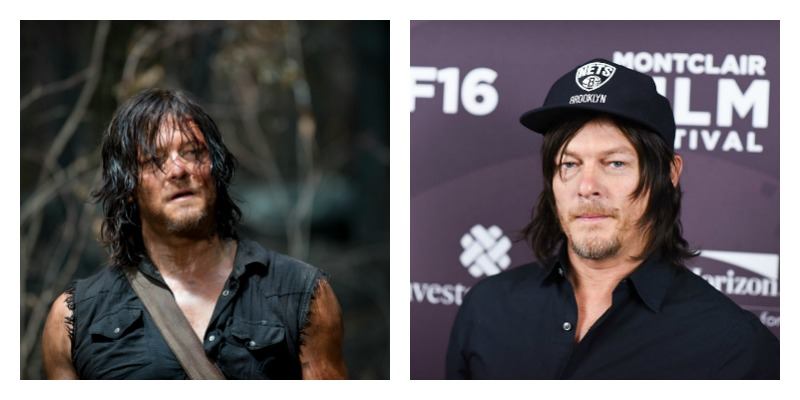 Daryl has been the outdoor expert since day one, and has therefore always looked rough. His character however, transformed in terms of his mental state. At first he just went along with what his brother, Merle did. Now, he defends his new family with Rick. The actor can definitely clean up his look with a button down shirt and baseball hat. 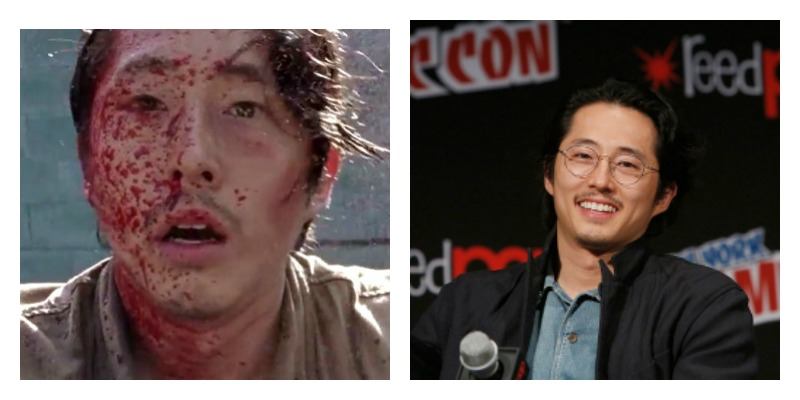 Glenn starts off as a young kid who used to be a pizza delivery boy. He later becomes a tough survivor and falls in love. Glenn has gotten into quite a few dangerous situations, which have left him covered in blood. But the actor is very handsome and not afraid to rock his glasses when he’s not acting. It’ll be exciting to see what new looks he’ll have in future acting roles. 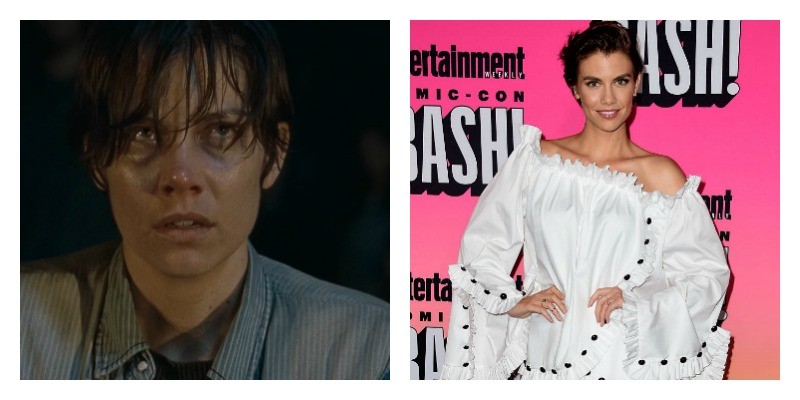 Maggie starts off living on her father’s farm. Her character is therefore pretty sheltered from the danger, but as time goes on she gets in messy situations with the rest of the group. Maggie is beautiful in any situation she’s in, and that says a lot given the show. But off-screen the actress really shines with her pixie cut and glam look. 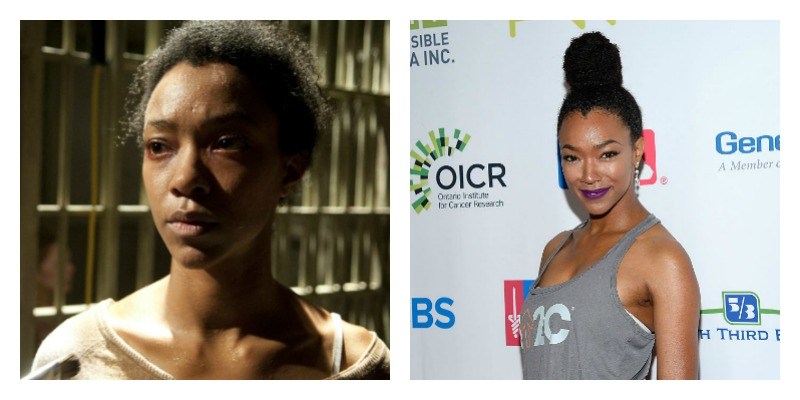 We first meet Sasha in Season 3 with her brother Tyreese. Sasha is often seen with her hair pulled back and a gun in her hand, so her look when she’s not working is very different. The actress usually has her hair styled high and her makeup is always amazing. You can catch her with a different look in her role on Star Trek: Discovery. 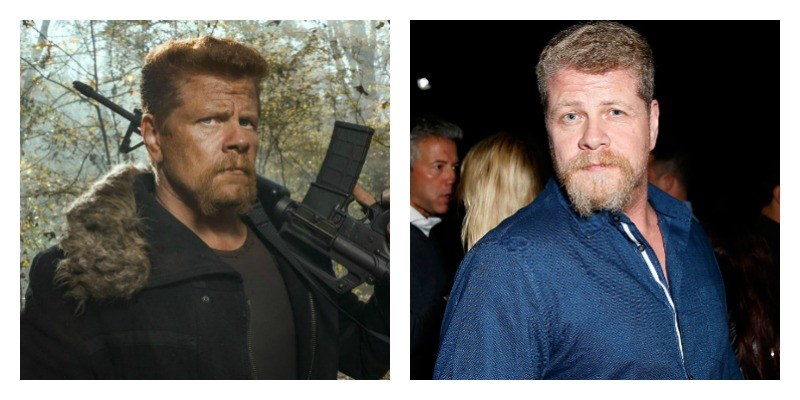 Abraham starts off protecting Eugene, who claims to know the cure for the outbreak. A lot of things change for the character on the show, but not his style. Abraham always has his signature fiery red hair and mustache, but the actor isn’t as easy to point out when he’s not on the show. The actor seems to dye his hair a much lighter shade, but he still rocks the awesome facial hair. 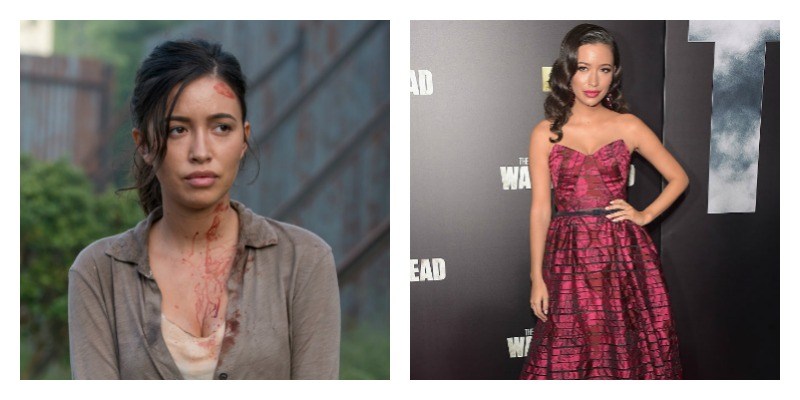 Rosita starts off helping Abraham protect Eugene in order to come up with a cure. Her goal also ends up changing, but her look is set in stone. Rosita usually has her hair in a ponytail, a hat on, and clothes that are good for fighting in. But the actress is almost unrecognizable when she lets her hair down and wears makeup. The actress previously played Raven on The Secret Life of the American Teenager where she also looks very different because she had a lighter hair color. 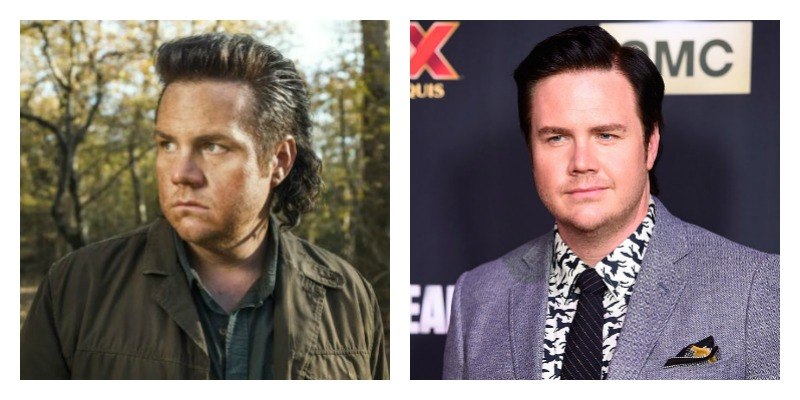 Eugene starts off claiming to be a scientist that knows the cure to the disease that is creating walkers. Throughout the show, he struggles with figuring out his place in this new world. He also has one of the most distinctive hairstyles in the entire cast: a mullet. But, believe it or not, the actor didn’t always have that hairstyle. He has actually played a lot of characters that require a clean cut like his role on Mad Men. 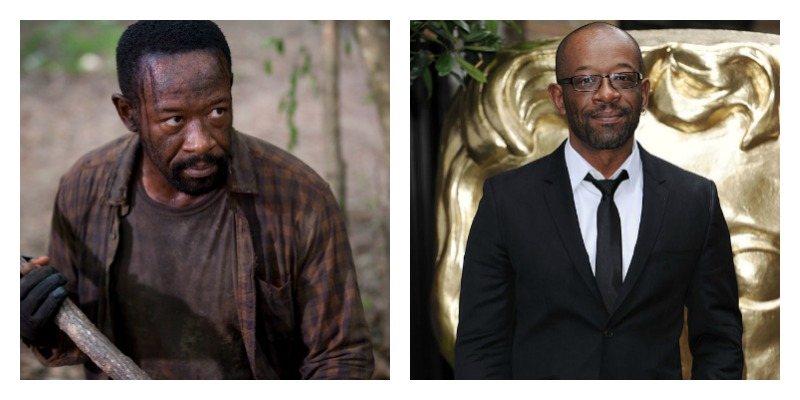 Morgan is first seen trying to survive with his son, after his wife dies. There are a lot of time periods where his character isn’t on-screen, but then Morgan comes back completely changed. However, his look tends to stay the same. Morgan doesn’t always have a lot going on when it comes to his hair on the show, but the actor cleans up nicely and rocks glasses in real life. 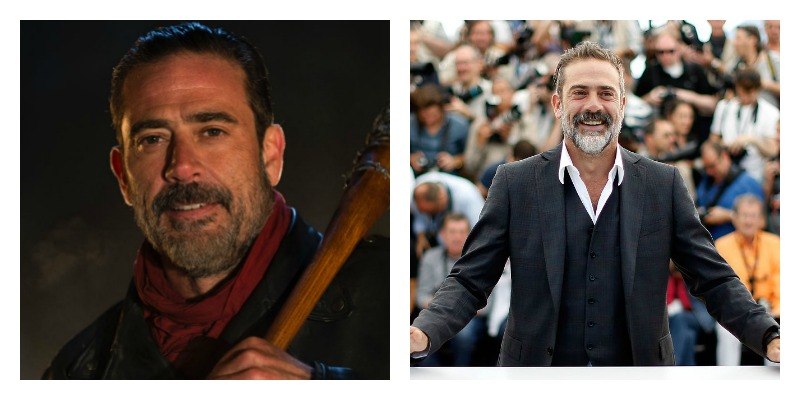 There are some villains on the show that heavily rely on costumes, but Negan looks like the type to keep it simple. We haven’t seen much of our new villain yet, but chances are he will get just as dirty and bloody as the others later on. The actor rocks the same facial hair as his character, but seems to have dyed it for the role. 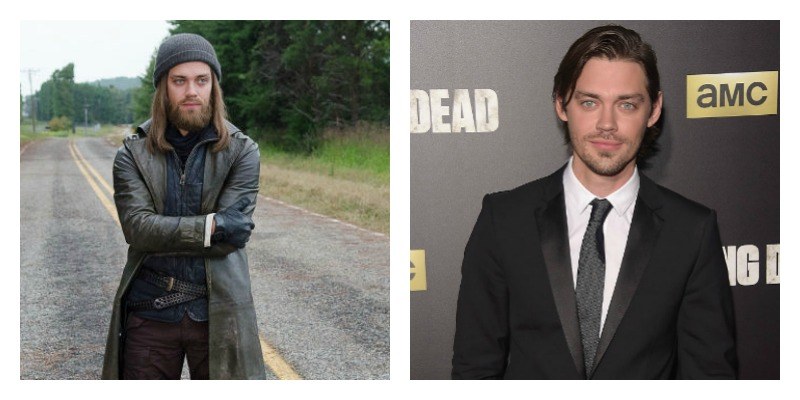 Jesus is part of the Hilltop community, and became a recruiter for them. The character comes across pretty sketchy sometimes, and isn’t well kept at all. He has long hair and a beard, and wears multiple layers of leather. But the actor is actually quite a looker when he’s not working on the show. He also sounds different, given that he’s from Essex, England. It’ll be interesting to see if Jesus will ever get a haircut. 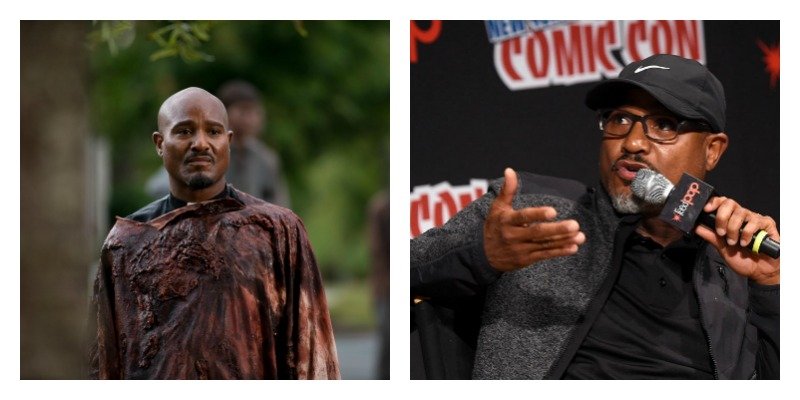 We first met the priest in Season 5 of the show. We find out that he has survived by barricading himself in a church, and feels guilty about it. Since then, he has been part of the group. When the actor isn’t on the show it looks like he lets his hair go gray and rocks glasses. In addition to being on The Walking Dead, the actor plays Dr. Alan Deaton on Teen Wolf. 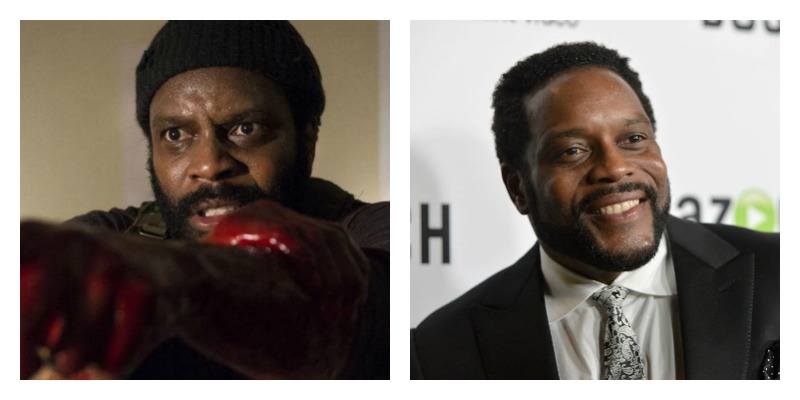 Tyreese joined the group with his sister, Sasha after meeting them in Season 3. Things weren’t always perfect between Tyreese and the team, especially when his character got into a fight with Rick and Daryl. But Tyreese was a character that loved the group, and took on duties like protecting the children and the elderly. When the actor isn’t playing Tyreese his facial hair is quite a bit shorter. The actor now plays Frederick Lucius Johnson on The Expanse, where he sports a clean haircut. We’ll miss his messier days. 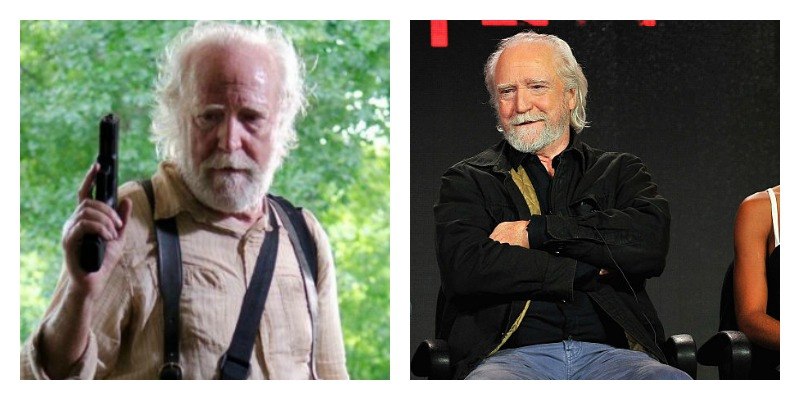 We first met Hershel in Season 2 of The Walking Dead. His family lived on a farm, and the group decided to stay there for safety reasons. Sadly, it got overrun and Hershel had to learn how to survive among the walkers. His character was often known for giving the other characters wisdom. When he’s not playing Hershel, the actor is more clean cut but still rocks his white hair. You can catch him now on The OA. 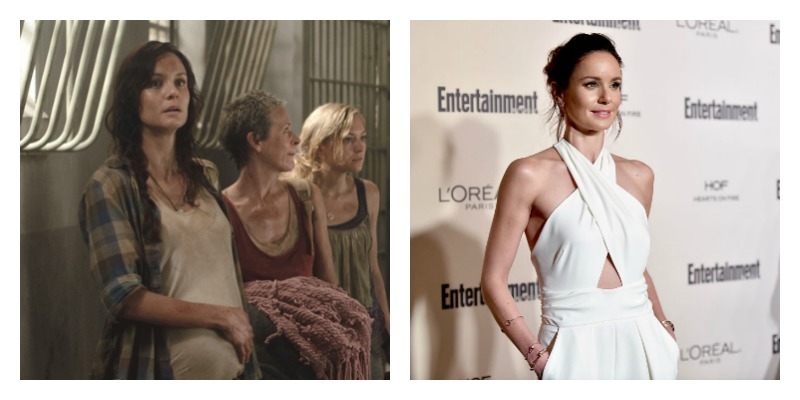 The show kicked off with Rick’s wife, Lori and son getting separated from him after he was left behind in the hospital. Throughout the show, Lori changed physically because she gets pregnant. In real life, the actress is pretty unrecognizable given her tiny frame and much cleaner look. You can catch the actress on Colony as Katie Bowman. There, she gets many more diverse fashion options than she did on The Walking Dead. 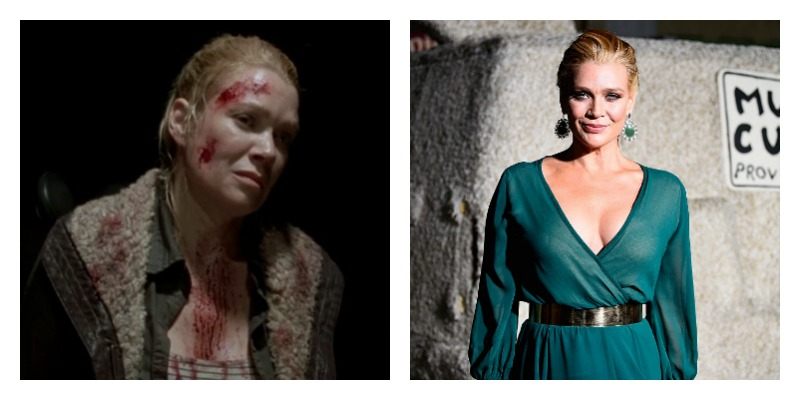 Andrea started off living with Shane’s group along with her sister. Along the way Andrea becomes an interesting and tragic character. She struggles to find a reason to keep surviving and searches for love and a new family. However, the character is also strong and an amazing shooter.

In real life, the actress is of course less covered with blood, and more glamorous on the red carpet. She has been bouncing between shows and hasn’t changed up her look too drastically. 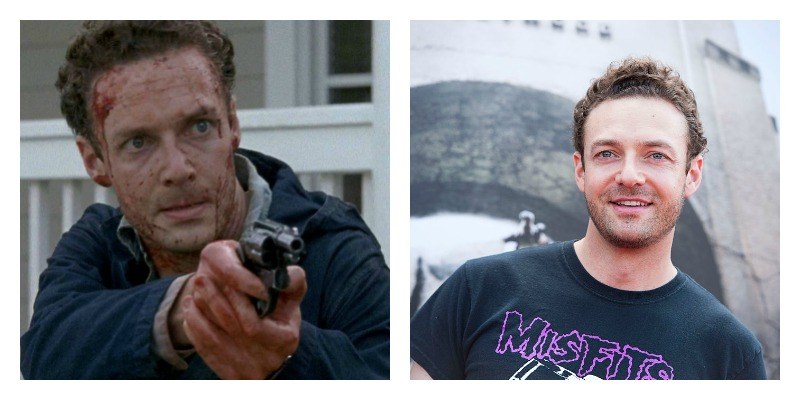 Aaron is the recruiter for Alexandria. We meet him in Season 5 and he helps bring the group into Alexandria. He is also one of the few gay characters on the show. His character gets pretty dirty and bloody at times, but when he’s not working he keeps his look much cleaner. The actor was previously on Impress Me as Ross Marvin. 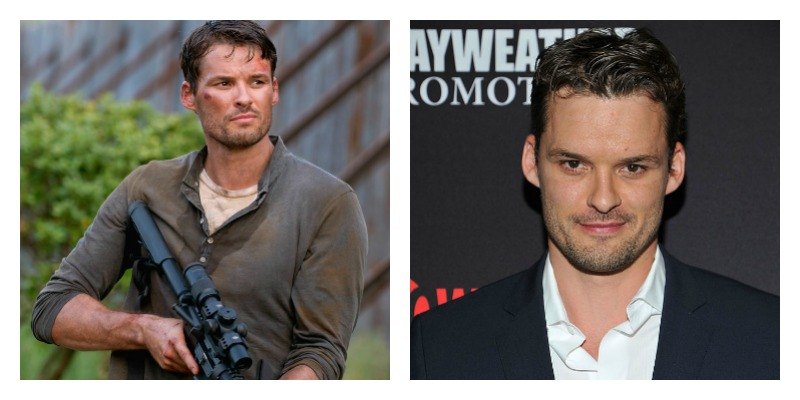 Spencer is the son of Deanna, who was the leader of Alexandria. Because of this, he has a strained relationship with Rick and his group. On the show, Spencer gets roughed up, but he looks pretty good off-screen in his suit and button down shirt. The actor was previously the star of One Tree Hill and looked pretty similar there. 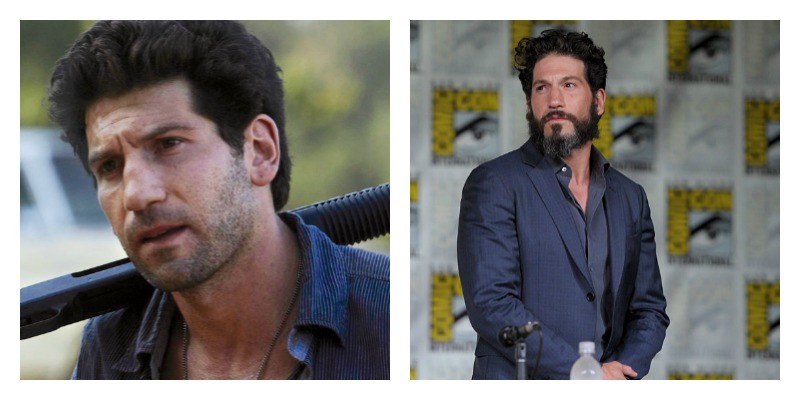 Shane starts off as Rick’s best friend, who goes off with Rick’s wife and son, and tries to survive. When Rick catches up with them, things get pretty awkward. Shane transforms his look on the show by shaving his head. Now that he’s no longer on The Walking Dead, he has a longer hairstyle and a beard for his role in The Punisher.

22. David Morrissey as The Governor 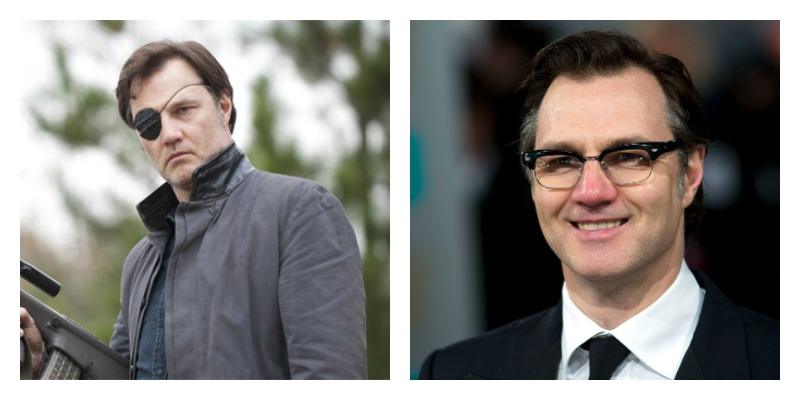 We meet the antagonist in Season 3. He takes in Andrea and Michonne, and eventually goes up against Rick and the group while they are living in the prison. The Governor is definitely an interesting villain. He has one eye so he wears an eye patch. Of course, in real life the actor doesn’t need it and often wears glasses instead. He’s also English, so he has a British accent. 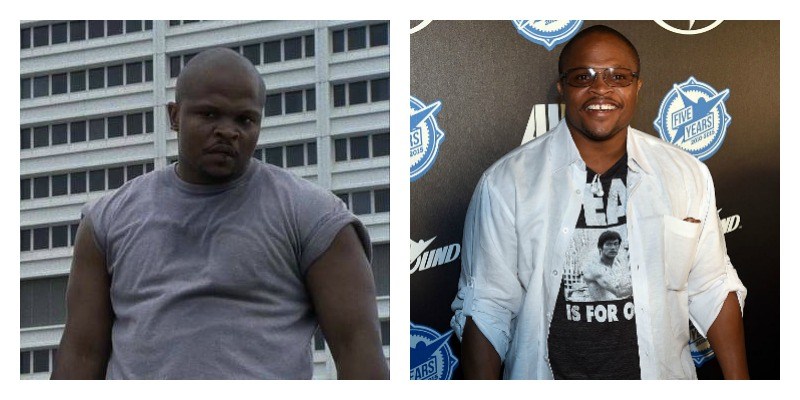 T-Dog is one of the original characters of the show and before the apocalypse, he was a college football player. The character did butt heads with Merle, because Merle would call him racial slurs. His character pretty much stayed the same physically, but when Singleton wasn’t playing the T-Dog he let his hair grow out a bit more. 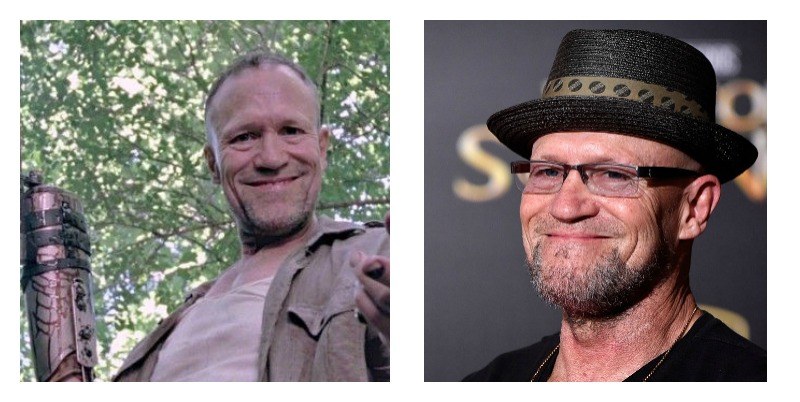 Merle starts off on the show with his brother, Daryl. He then decides to attack T-Dog and Glenn. When he gets separated from Daryl, both characters go down very different paths. Merle physically changes when he loses his arm. In real life, the actor pretty much looks the same, but likes to accessorize. The actor is also from Alabama, so his character’s accent is probably the real thing. The actor also plays Yondu in Guardians of the Galaxy.

Dale was the first character to play the group’s moral compass. He was very protective over Andrea when she decided she didn’t want to live anymore and he kept an eye on Shane when he felt like he was going down a dark path. Dale always rocked a fisherman’s hat and chances are it would take you a while to recognize the actor in real life because he doesn’t keep his character’s beard or wear the signature hat.