‘Super Mario Maker’ May Be the Best Mario Game in Years

I think it’s safe to say Nintendo hasn’t ever made a bad core Mario game. Even weird ones like Super Mario Sunshine are still good fun. But in recent years the lovable platformers have failed to stand out as much as previous installments. They’re still a lot of fun to play, but the last one to feel truly special was probably 2010’s Super Mario Galaxy 2.

From the looks of it, Super Mario Maker could turn the plumber’s fortunes around.

This game is about playing as well as creating. The game comes with 60 pre-built levels, some of which were designed by legendary game creators. That’s already a great selling point, but the possibilities become endless when you get a look at the tools that give Super Mario Maker its name.

But the game doesn’t stop at the limits of previous Mario games. You can make levels that exhibit never-seen-before behaviors. For instance, you can put enemies in coin blocks. You can feed enemies mushrooms to grow them bigger. You can have music blocks play different notes in a nod to the music creation section of Mario Paint on Super Nintendo. You can even make your own sound effects that are triggered when the player reaches any point you choose.

Based on the sheer scope of possibility, it sounds like it could easily be overwhelming. To sidestep that problem, Nintendo has come up with a unique way to ease players into using the tools. Instead of giving you access to all of the tools from the start, you have to spend time building levels. If you spend five minutes building, you’ll unlock a new set of tools that will become available the next day. Getting all of the tools requires you to build levels on nine separate days. 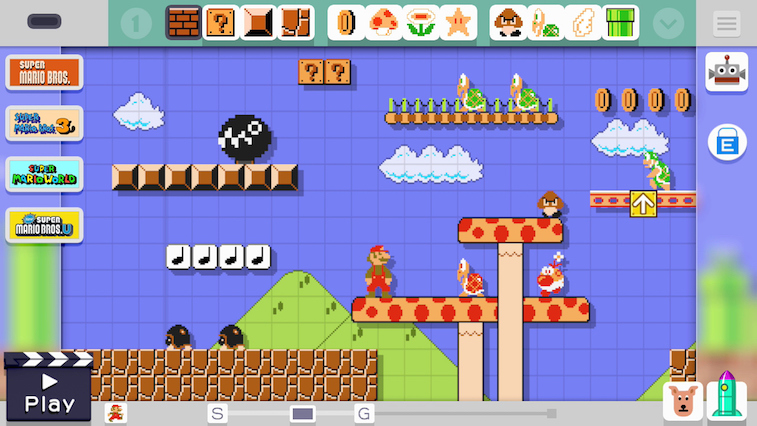 The levels you create aren’t stuck on your Wii U console. As long as you can beat a level you created, you can upload it for others to play. That also means you can go online and download an endless stream of levels created by other players. It’s basically a Mario game that never stops giving.

When you go online, you can view the courses in a number of ways, including recently created and highly reviewed. You can even follow your favorite course creators so you always stay up to speed on the levels they’re making.

Nintendo has found enormous success with its line of Amiibo figures, so it’s only natural that you can use them with Super Mario Maker. In fact, this game is compatible with over 50 Amiibos. To use them, just touch them to your GamePad as you’re designing a course. That makes the character drop into the game, where you can put them in a mystery mushroom to make Mario transform into that character. Toward the end of the video above, you can see players playing as Link, Kirby, the Wii Fit trainer, and Bowser.

With all of these new options available to a much bigger pool of level designers than ever before, it’s safe to say that Super Mario Maker will be the zaniest Mario game ever made. The kinds of levels players will create remains to be seen, but even the levels in Nintendo’s preview videos are far more bizarre and fascinating than any level put in the core series.

That’s good news for anyone who likes Mario games. Super Mario Maker is slated for release on September 11, exclusively for the Wii U.