Tarantino at Comic-Con: Confirms New Western After All 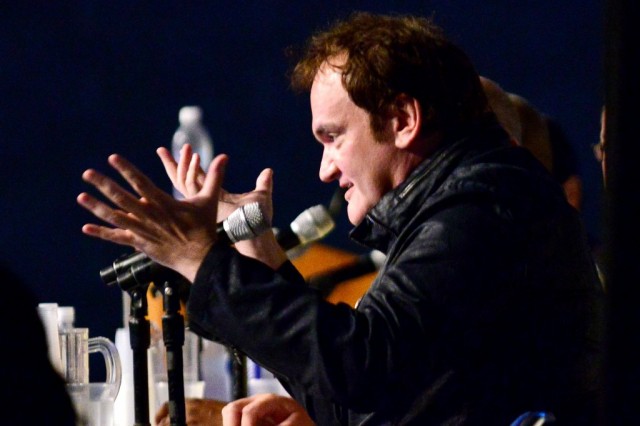 Quentin Tarantino made an appearance at Comic-Con over the weekend to confirm that his beleaguered Western The Hateful Eight is moving forward as planned despite a script leak earlier this year that made the iconoclastic director declare that he would shelve the project.

According to Deadline, after a fan asked about the status of The Hateful Eight, the director said that he’s continuing with the film, though he didn’t give any more details. Before his panel at Comic-Con, Deadline reported that a source had told the publication that Tarantino is in the process of locking everyone in to begin shooting in early 2015.

In an interview with Deadline in January, Tarantino said that he was so upset and felt so betrayed over the leaked script — which, it turns out, had made its way on to the Internet via a rep for one of the actors he’d sent an un-watermarked copy to — that he was going to give up on the project of a post-Civil War-era spaghetti Western entirely. “I’m very, very depressed,” Tarantino said in the Deadline interview. “I finished a script, a first draft, and I didn’t mean to shoot it until next winter, a year from now. I gave it to six people, and apparently it’s gotten out today.”

The Deadline journalist who spoke to Tarantino, Mike Fleming Jr., said that he spent much of the interview trying to convince Tarantino not to abandon the project, as the chance to see Tarantino’s take on a true ensemble Western is enough to make any fan of the director salivate in anticipation. “I could totally change my mind; I own the fucking thing,” Tarantino said at the time.

Instead of giving up on the project, Tarantino decided to sue the media website Gawker, which posted links to the material on its website Defamer, for copyright infringement. Gawker denied that it did anything wrong by posting that link, and accused Tarantino of milking the story for increased media attention.

A few months later, Tarantino came back from all that controversy by staging a rock star-level reading of the first draft of the script at Film Independent in Hollywood in April. Actors present for the reading included Samuel L. Jackson, who played Major Marquis Warren; Kurt Russell, who played the bounty hunter John “The Hangman” Ruth; Amber Tamblyn, who played The Hangman’s prisoner, Daisy Domergue; and Bruce Dern, who played Confederate Gen. Smithers. The other actors on hand were James Parks, Walton Goggins, Denis Menochet, Tim Roth, Michael Madsen, Dana Gourrier, Zoe Bell, and James Remar. The reading lasted three and a half hours and gave viewers the chance to catch a rare glimpse into Tarantino’s creative process as he directed the actors through their parts.

At Comic-Con, the director also spoke about plans for a Django Unchained-Zorro mash-up comic book. “I loved this idea, not only because I like Western comics in general, but I also loved Zorro in all his iterations whether it was the Disney series or the William Witney films. I thought it was a great idea of taking the most famous, fictional Mexican western hero and putting him together with the newer, famous black western hero,” said Tarantino, per Deadline.
[mediagraph-partner content_url=”8486264a437fe65e7f9c63ac”]