Taylor Swift alleges a former radio DJ groped her before a 2013 concert, and jury deliberations in the related civil lawsuit are underway in federal court in Denver. The sexual assault suit was filed against former DJ David Mueller. The groping, denied by Mueller, allegedly happened during a photo opportunity.

Swift is seeking a ceremonial $1 judgment to “serve as an example to other women who may resist publicly reliving similar outrageous and humiliating acts,” wrote Swift’s attorney, Douglas Baldridge, as reported by NPR.

The singer became emotional in court as Mueller’s attorney questioned whether her smiling face in the photo was that of a person who was upset. Her mother, Andrea Swift, touched her daughter’s leg as she cried.

Swift had testified that the photo was taken just as she was groped by Mueller. “I felt him grab onto my bare ass cheek,” she said. “It was a definite grab, a very long grab.” She testified that she mentioned the incident to her photographer 15 minutes after it occurred.

After the alleged incident, Mueller went on to sue Swift in 2015, claiming her story caused him to lose his job. On Aug. 11, a judge dropped Mueller’s suit, ruling he had not proved Swift set out to have him fired.

After Monday’s closing arguments in Swift’s groping suit against Mueller, U.S. District Judge William Martinez thanked the council for their “very zealous” representation of their clients, as reported by TheDenverChannel.com. The trial remains in recess while the jury will deliberate until a unanimous decision is reached. 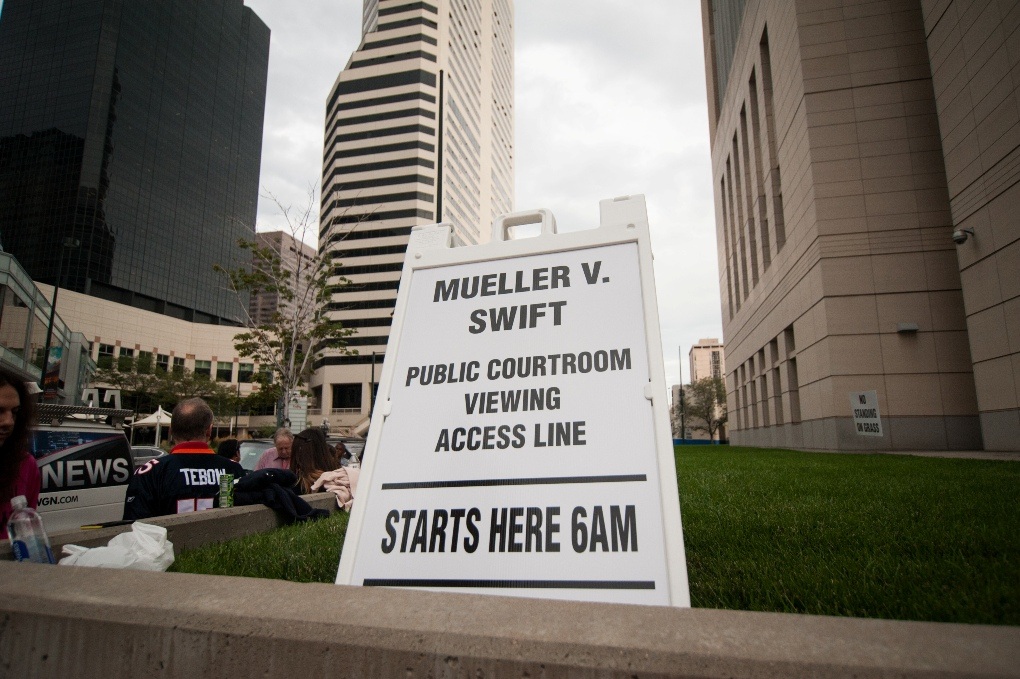 A sign is placed outside the civil case for Swift vs Mueller. | Theo Stroomer/Getty Images

Singer Kesha tweeted support for Swift Monday morning. “I support you always and especially right now and admire your strength and fearlessness,” she wrote. “Truth is always the answer.” Kesha is involved in a legal battle of her own with former producer Lukasz “Dr. Luke” Gottwald. The suit alleges sexual assault and battery.