Reality TV star-turned president Donald Trump is no stranger to the camera. Over the past few decades, he has appeared in countless TV shows and movies. According to IMDb, since 1981 Trump has appeared on film and TV over 230 times. That includes 219 as “Self” and 20 as an actor, usually playing “Donald Trump.” The most recent appearance though, raises some eyebrows. Whether acting as the face of wealth and privilege itself or as a more sinister favor, we can look for clues to where his loyalties lie.

As owner of the Miss Universe Pageant, Trump became entangled in business dealings he still struggles to shake off. The Guardian recently reported new developments in relation to the Moscow Miss Universe pageant in 2013. One of those featured Trump appearing in a Russian pop star’s music video.

Yes, that is our president in this music video. | AFP News Agency via Youtube

Trump and Aras Agalarov, the billionaire owner of the Crocus Group corporation, became friends when they met in 2013. A month earlier, Trump appeared in Agalarov’s son Emin’s pop video. Emin chose the current Miss Universe as his co-star, which brought Trump into the mix. Over dinner after that meeting, they made a deal that lives on in infamy.

According to Forbes, Emin spoke with Paula Shugart, then the head of the Miss Universe organization. He reported that she said, ‘We’re always considering taking the contest to Russia and never really succeeded. And in the current year we have a lot of debts.” To this day, Shugart denies discussing debt. Agalarov agreed to pay $20 million in return for Trump bringing the Miss Universe contest to Russia. Democrats now believe that deal signifies more than a casual movie appearance-turned friendship.

How close did Trump’s ties to Agalarov become? 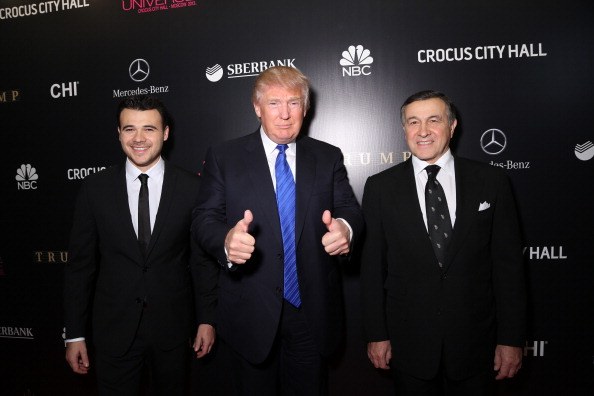 “The pageant was financed by a Russian billionaire who is close to Putin,” Senator Al Franken of Minnesota told a congressional hearing. “The Russians have a history of using financial investments to gain leverage over influential people and then later calling in favors. We know that.”

According to The New York Times, Agalarov and Putin had close ties. In 2013, the Kremlin bestowed the Order of Honor on Agalarov, one of its highest civilian awards. That doesn’t mean Agalarov acted as an agent of the Kremlin, but it appears likely.

“In a sense, almost no one is a direct agent of the Kremlin, but almost anyone can become one if the need arises,” said Ekaterina Schulmann. The political scientist at the Russian Presidential Academy of National Economy and Public Administration noted most would eagerly respond to the chance to express loyalty.

“If you are a business person, you are supposed to do something that the Kremlin asks you. You are otherwise free to pursue your own interests. That is how Russia works,” said Schulmann.

Trump’s ties to this other entertainment mogul also look suspicious.

British music mogul set up a meeting with Russian operatives

Goldstone, a British music publicist and former tabloid journalist, told the Associated Press he set up a meeting in which Trump Jr. met Natalia Veselnitskaya. It also included then-campaign chairman Paul Manafort and Trump’s son-in-law, Jared Kushner. That means he arranged the relationship between Agalarov and Trump in June 2016.

According to an email chain obtained by The New York Times, Goldstone sent an email to Trump Jr. It mentioned documents that “would incriminate Hillary and her dealings with Russia and would be very useful to your father.” He added, “This is obviously very high level and sensitive information but is part of Russia and its government’s support for Mr. Trump.”

Trump Jr. replied within minutes. “If it’s what you say I love it, especially later in the summer.” After that meeting took place, Trump Jr. characterized it as containing “nothing of substance.”

“After pleasantries were exchanged, [Veselnitskaya] stated that she had information that individuals connected to Russia were funding the Democratic National Committee and supporting Ms. Clinton,” Trump Jr. explained. “No details or supporting information was provided or even offered. It quickly became clear that she had no meaningful information.”

Goldstone corroborated that, calling Veselnitskaya’s claims “the most inane nonsense I’d ever heard.” He, for his part, bragged about his Russian connections in the past. His entertainment industry ties run deep, and we all know how Trump loves that business.

But who is Rob Goldstone?

Hours after Trump’s victory in the 2016 election, Goldstone posted a photograph to Instagram in which he wore a T-shirt with a large “RUSSIA” logo. He captioned it: “Hedging bets.” After a Guardian reporter posted the picture to Twitter, he erased it and made his account private.

According to a comprehensive report in Vanity Fair, Goldstone made at least 19 trips to Russia since 2013. In one Instagram post, he described Moscow as “his second home.” The music manager started his career as a journalist and relocated to Sydney after Michael Jackson chose him to accompany him exclusively on his 1999 Australian tour, according to his website. From there, he founded Crawford Goldstone Publicity and represented artists touring Australia. Those included Cyndi Lauper, Julio Iglesias, James Taylor, Tracy Chapman, BB King, UB40, Marianne Faithful, U2, and Poison. He currently runs public relations firm Oui 2 Entertainment.

While Emin and Goldstone represent Trump’s most apparently sinister connections, others gave rise to his image — and may have encouraged him to run as a public figure.

Giving directions to the Plaza Hotel

In the 1992 Christmas classic Home Alone 2: Lost in New York, Trump gives Macauley Culkin directions to the lobby of the Plaza Hotel. This cameo plays into what The Atlantic once called “a fairly superficial portrait of privilege and wealth in the late-20th-century United States.”

Because of course Trump gives Kevin McAllister directions to a hotel lobby. If there’s one thing the former mogul knows, it’s hotels. Even as president, he continues entangling himself in real estate conflicts of interest. TIME reported his properties both in Washington, D.C., and worldwide lie rife with the same.

“He is one great big example of exploiting public office for private gain,” says Kathleen Clark, a law professor at Washington University in St. Louis, who trains governments around the world in ethics and anti­corruption practices. “Of course it’s a scandal.”

One of Trump’s Sex and the City cameos fit right in with his history of sexual abuse allegations.

Trump’s friend tried to go for Samantha in Sex and the City. | HBO

According to IMDb, the promiscuous Samantha gets involved with Trump’s single friend in Sex and the City. “Donald Trump’s single friend Ed is past 70, so will his old-fashioned wooing and lavish gifts outweigh his physical decay?” asks the synopsis. Trump appearing in a segment that features sexual conduct of any kind at this point, surprises no one.

A little over a year ago, The Washington Post uncovered a tape of Trump speaking on a hot mic during an Access Hollywood appearance in 2005. Lest we forget, he made lewd comments about women to host Billy Bush. The now-president said he can do whatever he wants because he’s famous. “Grab them by the pussy,” he said. “You can do anything.”

At the time of his 1999 Sex and the City appearance, women had not yet accused Trump of sexual misconduct. In case you forgot, NPR still has a complete list. Watching that segment today, however, looks a little creepier. Trump also starred in another film that aged really, really poorly.

Trump, Harvey Weinstein, and Woody Allen made a movie together

Harvey Weinstein and our president have worked together in the past. | Loic Venance/AFP/Getty Images

According to The Wrap, Trump, Weinstein, and Allen all appeared in Celebrity together in 1998. The film depicted “the power of fame, an unlikely portrayal of a very average man who is a magnet for beautiful women.” Today, it brings together three men all accused of sexual misconduct. That gives it a very different tone.

Despite a big-name cast — the movie starred Kenneth Branaugh, Leonardo DiCaprio, and Charlize Theron — it did not come to critical or commercial acclaim. “There have got to be entertainment writers all over the country chuckling at the kind of access Lee has to a drop-dead supermodel,” wrote CNN at the time. “How many supermodels … are going to climb into a car with a middle-age freelance writer after a runway show?”

Recent sexual assault allegations about all three of them put the movie in an entirely new pall. Most of Trump’s film and TV appearances, including Emin’s music video, appear small at first glance. Only in retrospect do we see the sinister side to his caricatures of wealth and privilege.

As The Atlantic sums up, “the silver screen version of Donald Trump, or Trump as Trump, is a pretty toned-down version of the Trump who has emerged in 2015. On film, he’s just a guy who shows up … then recedes into the background as the plot carries on without him. In politics, clearly, that hasn’t been the case.”