The 10 Greatest Books Ever Written About War

War is one of the most popular subjects in virtually all forms of art, and justifiably so — the heightened danger of war has affected virtually everyone the world over, in one way or another. There’s enough to say about the subject that literature on the subject will likely never dry up, even if we do ever achieve world peace. With so many novels exploring the countless themes and ideas relevant to life during wartime, we’ve done our best to narrow that pool to ten of the best books about war ever written. In no particular order, let’s count them off…

Perhaps Kurt Vonnegut’s most autobiographical novel, Slaughterhouse Five still finds plenty of time for high concept science fiction nonsense in the midst of a story about the blank slate Billy Pilgrim. Like Vonnegut, he bears witness to one of the most tragic and unnecessary bombings of World War II, in the destruction of the strategically insignificant, architecturally gorgeous Dresden. Unlike Vonnegut, Pilgrim is abducted by advanced alien lifeforms and comes unstuck in time, two concepts that allow Vonnegut to work in plenty of his absurdist, resonant musings about war and postwar life. 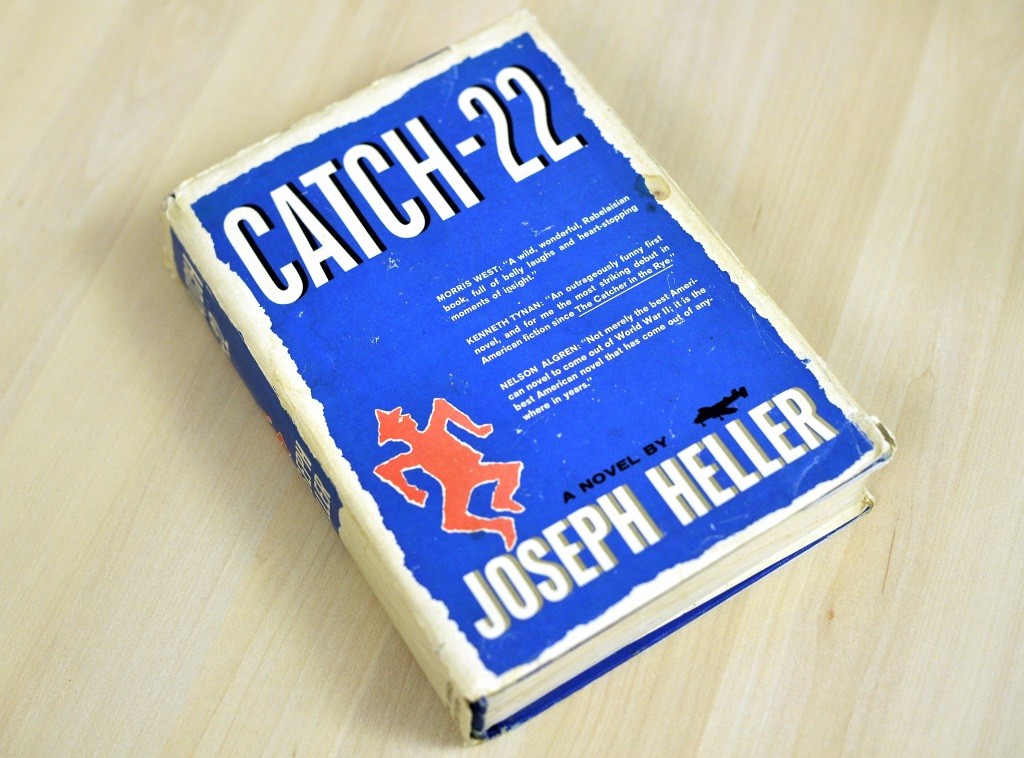 As great as Slaughterhouse Five is, it can’t beat Joseph Heller’s Catch-22, the ultimate meditation on the absurdity and insanity of war. He paints a portrait of institutionalized insanity wherein lives are sacrificed in service of bureaucracy and capitalistic opportunism. It’s simultaneously hilarious and profoundly depressing. In Heller’s world, sanity is not only inadvisable but also nearly impossible. His protagonist Yossarian is a true individualist whose own questionable sanity and paranoia that everyone, even and especially his selfish superiors, is out to kill him is held up as the only logical response to war.

3. A Farewell to Arms by Ernest Hemingway 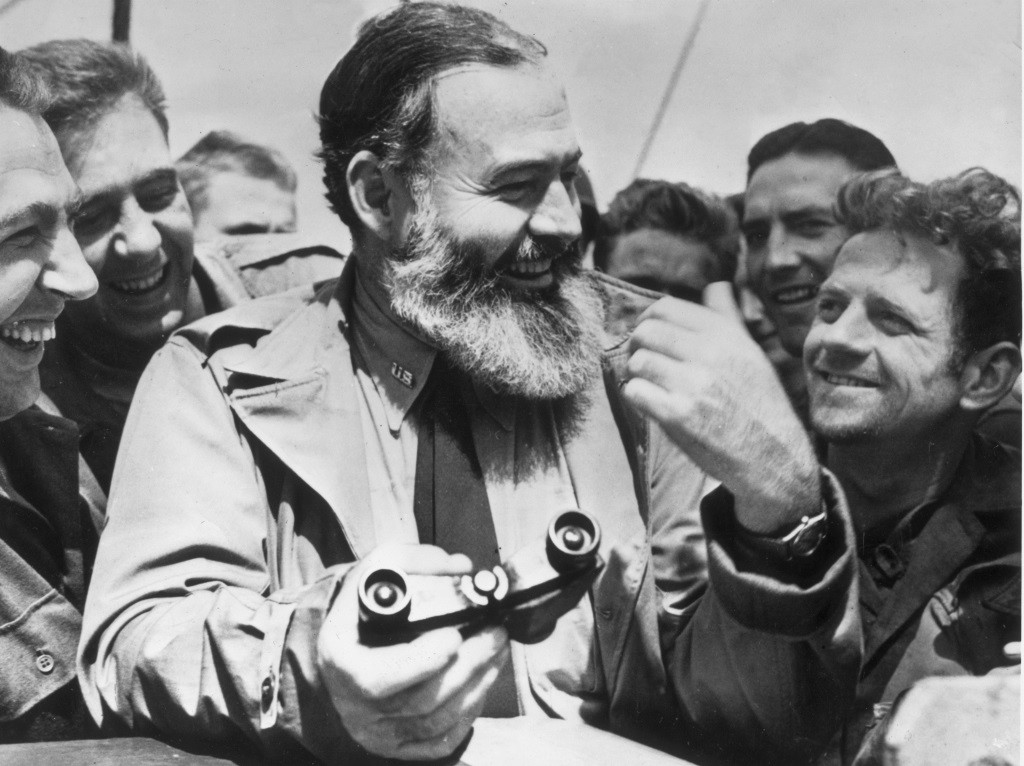 In the U.S., the First World War often feels like a footnote to its bigger, bloodier sequel, but it was an American writer who wrote perhaps the definitive novel of that bloody conflict. Ernest Hemingway’s A Farewell to Arms is a novel about a love affair that is enabled by and inevitably controlled by war. Hemingway’s signature spare prose captures the story with a simplicity that emphasizes the tragedy of this lengthy wartime love affair without ever becoming melodramatic. Ultimately, this is a work about the way that our lives are determined by forces outside of ourselves — in this case, a war that doesn’t really seem to serve an purpose.

4. The Things They Carried by Tim O’Brien 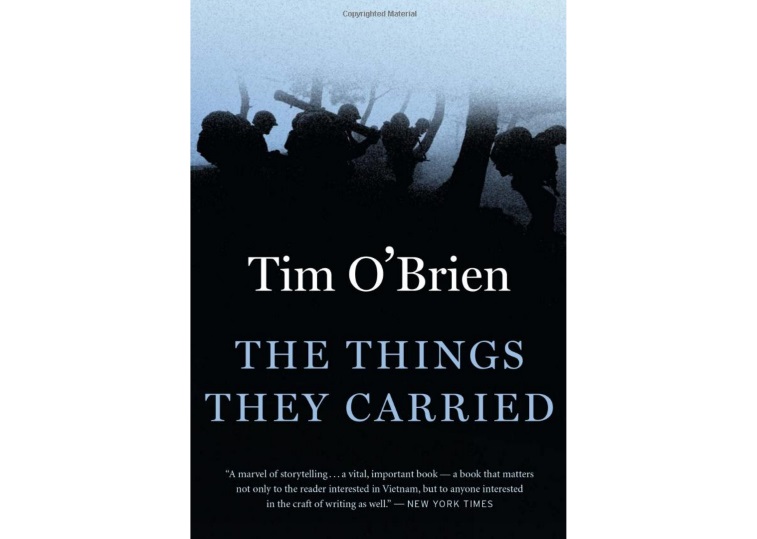 Officially a series of short stories, Tim O’Brien’s definitive book of the many he wrote concerning his time fighting in Vietnam is included here because it’s far greater than the sum of its parts. Rather than a disconnected book of stories, this is more a novel about the impression of an unnecessary war and the stigma surrounding it, as written by a true expert on the subject. The soldiers he writes of are men like him, boys too frightened or proud to flee to Canada when the draft came knocking and too inexperienced to put up any sort of fight against an enemy they didn’t understand. Significantly, certain portions movingly capture the post-WWII veteran experience, wherein soldiers returned to a land that hardly seemed to acknowledge or care about the horrors they endured overseas. 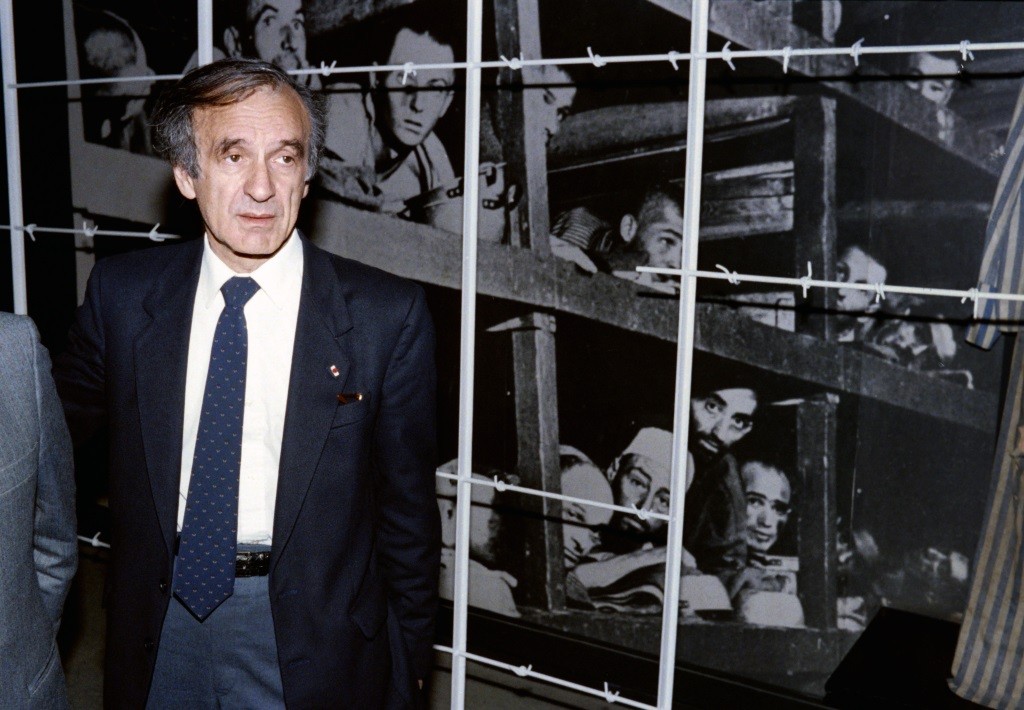 Elie Wiesel’s Night is a short novel, partially because he doesn’t feel the need to embellish the experience of living through the Holocaust as a child. His journalistic tone lets the horror speak for itself most of the time, though the novel is all the more terrifying for how he recounts the hopelessness he felt even as a child in the face of such irrational yet unstoppable evil. This book paints the Holocaust as it really was, allowing readers to imagine the despair that comes along with such godless times. For all that despair, Night is also, perhaps unintentionally, a depiction of the triumph of the human will, if only because it shows the way a man can live on after such horrors, the way Wiesel has.

The most contemporary of all the novels on this list, Ben Fountain’s war novel on America’s longstanding conflict in Iraq is decidedly light on war. Instead, the novel focuses on the brief homecoming of a squadron whose acts of routine heroism made them into media darlings. Despite glimmers of empathy here and there, Fountain is ruthless in portraying a hawkish culture that tacitly supports a war it doesn’t understand through buzzwords. These are Americans who compliment soldiers and spout buzzwords about terrorism and security to make themselves feel better. In the grand tradition of Catch-22, Billy Lynn’s Long Halftime Walk captures the surreal, absurd terror of a new kind of war.

7. War and Peace by Leo Tolstoy 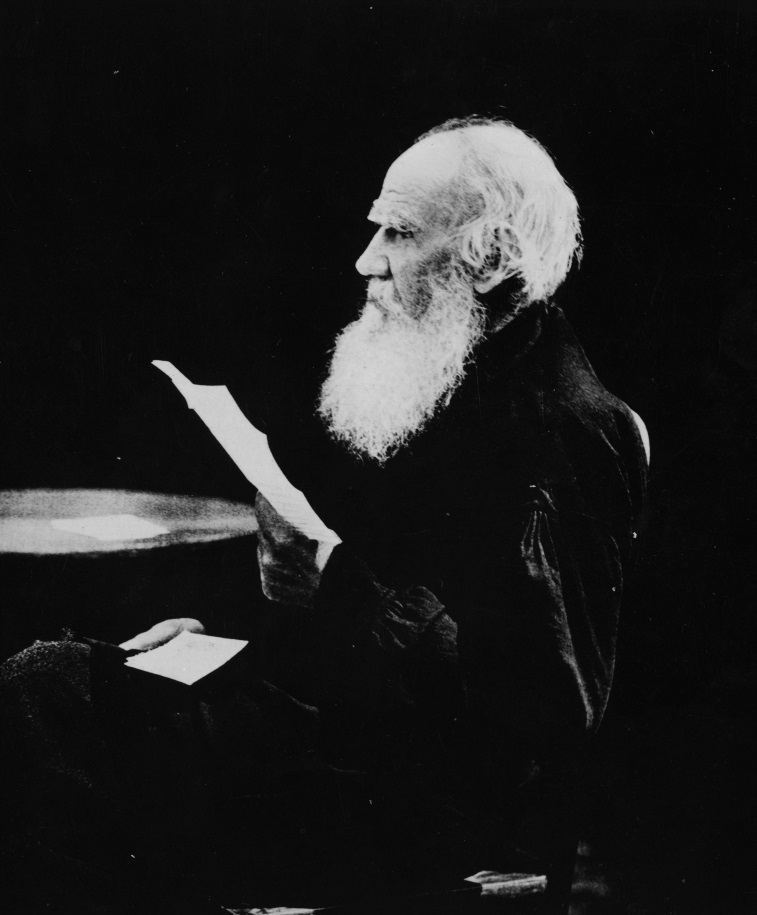 Russian novelist Leo Tolstoy used the backdrop of the Napoleonic invasion of his home country to construct a towering novel long enough to scare off most timid readers. Those who do bother to read the 1,000-plus page book are rewarded with one of the most nakedly philosophical novels concerning war and peacetime (hence the name!), which speaks directly to its time and place by focusing on the impact of war on aristocratic families within the tsarist societies while still working in themes of war, family, and humanity that continue to resonate today.

8. All Quiet on the Western Front by Erich Maria Remarque 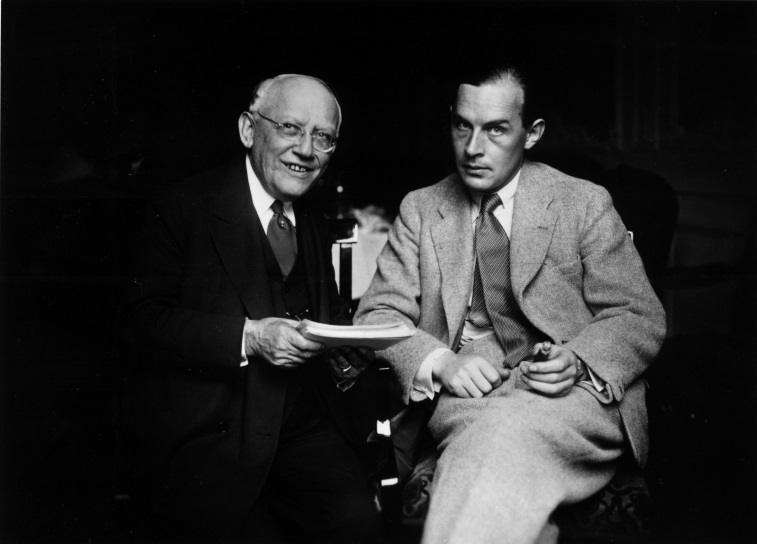 The other definitive novel of the First World War came from Germany, but Remarque’s depiction of the postwar struggle of soldiers adapting to the apparently meaningless ennui of civilian life knows no national borders. In many ways, Remarque’s novel is, by necessity, a major influence on all 20th century war novels that came after it. The glorification of war led the world into the major war is torn down with vigor here, as All Quiet on the Western Front strips away all the romanticism by showing the narrow divided between life and unnecessary death, as well as the huge divide between soldiers and superior officers.

9. Johnny Got His Gun by Dalton Trumbo

The cynical, surreal musings on war and the cruelty of our national obsession with it in screenwriter Dalton Trumbo’s celebrated anti-war novel seem tailor-made to speak to the counter-culture audiences of the 1960s, but in fact the novel was published in 1939 as a new world war was dawning. Taking place mostly inside the head of badly disfigured, limbless, faceless, and mute soldier Joe Bonham, Trumbo refuses to shy away from the horrific brutality of his concept, and even gives it added weight by juxtaposing his childhood memories with the battlefront memories of World War I.

10. The Naked and the Dead by Norman Mailer 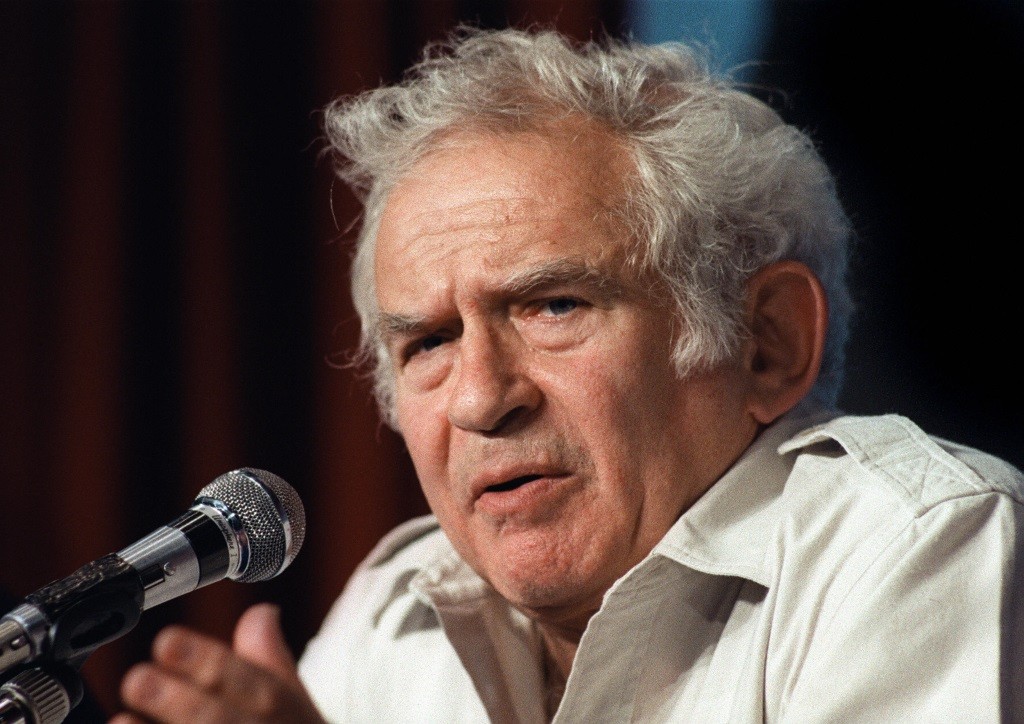 Norman Mailer doesn’t embellish his story of an American platoon fighting in the Japanese front of World War II the way some other authors might. He lets the reality of his plot, based on firsthand experience, convey his recurring themes of dehumanization and of brotherhood, the one beacon of humanity that his soldiers allowed while fighting a war in which they are required mostly to be unthinking pawns. Mailer doesn’t shy away from the horrors of war, but he also depicts the fleeting pleasures that allow the men to persevere despite it all, through bonding and through memories.