When Edgar Wright walked away from Marvel’s Ant-Man — a project he had been developing for over ten years off and on — film fans collectively shared their disappoint that such a talented young filmmaker had seemingly been chased away by the powers that be. But it also illuminated the fact that although Wright has put together a string of creative, well-received films, he’s still yet to make that film that makes him that makes him a household name as a director judging by the amount of casual onlookers unaware of who he was.

Of course, that breakout film was supposed to be Scott Pilgrim vs. the World — a Universal-backed blockbuster budgeted at nearly $100 million which, despite strong reviews from critics and kudos from the filmmaking community, failed to recoup its budget. The film has since gone on to experience a swift cult classic status as well as strong home media sales, but there’s no doubt that Wright still doesn’t get the credit he deserves despite a glittering list of modern classics including Shaun of the Dead, Hot Fuzz, his newest film The World’s End, and the British sitcom Spaced.

In order to celebrate a filmmaker who will no doubt become a household name in years to come, here’s a list of the fifteen greatest scenes from Wright’s career. 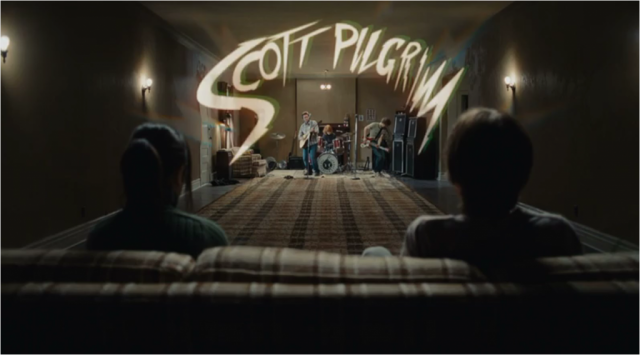 Maybe it isn’t technically a “scene,” but the opening credit sequence from Scott Pilgrim vs. the World definitely deserves a spot on a list of Wright’s coolest moments. As the Sex Bob-ombs begin playing for Knives Chow, the camera tracks backwards through the room, both elongating the space and referencing the look of videogames Guitar Hero and Rock Band. But then the real fun begins when a title sequence begins and the viewer is bombarded with a series of frenzied visuals that emulate experimental animations — specifically, scratching and painting on film. The result is a spirited and infectious opening that recalls some of the greatest experimental films from legends like Len Lye and Stan Brakhage.

During the final moments of The World’s End, we find that Andy has been telling the story seen in the film to a group of human survivors following Earth’s destruction. But when he admits that he doesn’t know what happened to Gary, we are given an epilogue that shows not only that Gary is alright, but he is also traveling the post-apocalyptic landscape with younger robot versions of his friends — with a giant sword no less. After asking for five waters in a pub with human survivors, the bartender’s refusal to serve robots sparks a brawl just before the film cuts to its closing credits. 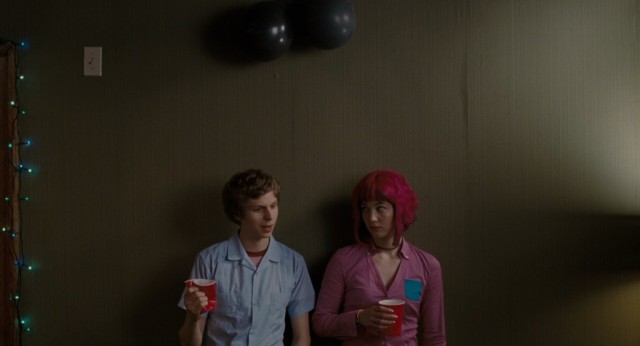 Scott Pilgrim’s quest to get the girl of his dreams — literally — doesn’t start off too hot when his go-to story about Pac-Man and its original name, Puck-Man, doesn’t exactly hit it off with Ramona Flowers. But what makes the scene even more memorable is the strange way that Wright frames the scene, giving both characters a couple of feet of headroom in order to capture a peculiar lightswitch that’s about seven feet off the ground. Shot at a frat house in Canada, the lightswitch reportedly puzzled Wright and his team so much that they decided it had to be included in the shot. 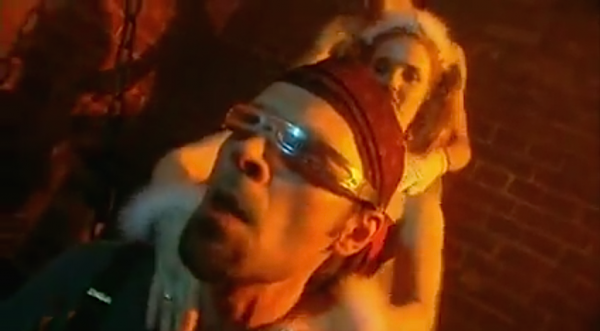 12. Spaced — Everyone Loves a Good Rave

One of the best episodes of Spaced, “Epiphanies” sees the entire gang end up at an epic rave where they each exorcises the demons of their clubbing pasts, including Brian who still has nightmares stemming from a 1983 club experience with Dexys Midnight Runners‘ Come On Eileen. The manic energy of the scene and Wright’s now-trademark visual flourishes and editing make the entire sequence one to remember. There’s little doubt watching it that Wright is honing the energetic style that now feels matured and calculated a decade later.

When Nicholas Angel and Danny Butterman are invited to a rendition of Shakespeare’s Romeo and Juliet, they have no way of knowing that they’re about to see possibly the greatest rendition of the play ever seen. Along with terrible acting and a last kiss that turns into a makeout session (despite the fact that Romeo is dead), the stage then cuts to black before all the players are back dancing to The Cardigans’ Lovefool. Nicholas and Danny’s faces say it all.

After listening to a speech by Guy Shepherd about accepting robot domination and discovering that Oliver has been replaced, Andy has simply had enough. He smashes Guy’s head via a headbutt, rips open his sweater à la the Hulk, and yells, “I f**kin hate this town!” With bar stools in each hand, Andy lays waste to the bar while Guy tries desperately to finish his beer without someone knocking it out of his hand. Featuring some of the best fight choreography since Scott Pilgrim vs. the World, the scene also displays Wright’s maturation when it comes to editing action sequences.

9. Shaun of the Dead — Zombie Takedown Set to Queen

Wright has always played with music in his films, but it’s hard to find a better example than the scene in which our heroes attempt to beat down a zombie to Queen’s Don’t Stop Me Now – synced to the beat of the song no less. The frenzied action and cross-cutting makes a hillarious counterpoint to the upbeat song while also anticipating Wright’s style of clashing tones for comedic effect. 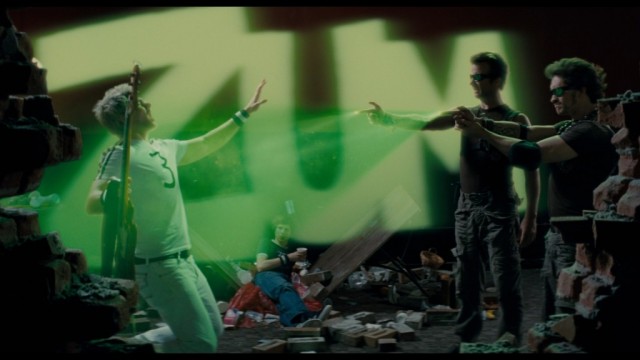 8. Scott Pilgrim vs. the World — Fight With Todd

After one too many insults, Scott has had enough and decides it’s time to brawl with Envy’s current boyfriend, and Ramona’s third ex-boyfriend, Todd Ingram. But Scott quickly learns that he might be outmatched when Todd’s eyes glow, his hair burns white, and he counters with psychic powers. “Didn’t you know?” Envy tells Scott, “Todd’s vegan.” What follows is an entertaining sequence in which Todd throws Scott into the sky and into a building before Scott decides he can only beat the vegan-powered ex-boyfriend via a bass battle, which Wright styles after the likes of Guitar Hero and Rock Band. Just when things are most dire, Scott tricks Todd into drinking half and half causing the “Vegan Police” to storm in and sap him of his powers.

Hot Fuzz is lovingly styled after the action buddy comedy so when the scene comes where partners Angel and Danny share a heart to heart, getting closer to one another than ever before, you can’t help but love Wright’s wink-wink to the audiences. “You’ve just gotta learn to switch off that big old melon of yours,” Danny says. Angel’s response, with dramatic emphasis: “I don’t think I know how.” Danny’s solution? A back-to-back session of Point Break and Bad Boys 2 — two movies that best encapsulate the kinds of movies that Wright and the filmmakers are lovingly lampooning.

The reveal and subsequent first fight with the robots in The World’s End isn’t necessarily the biggest or most complicated of the film’s many fight scenes, but there’s no doubt that it’s the most satisfying. After moving through the entire first act and seeing the group of friends get more and more distant from one another, all it takes is a five-on-five brawl in the bathroom to jump-start their friendship once again. The scene itself is no slouch either as Wright drifts around the bathroom using mostly a one-shot interspersed with short cutaways. The result is a fight sequence that feels chaotic and fun, with a camera that gives each character a chance to shine as their teamwork slowly gets better. 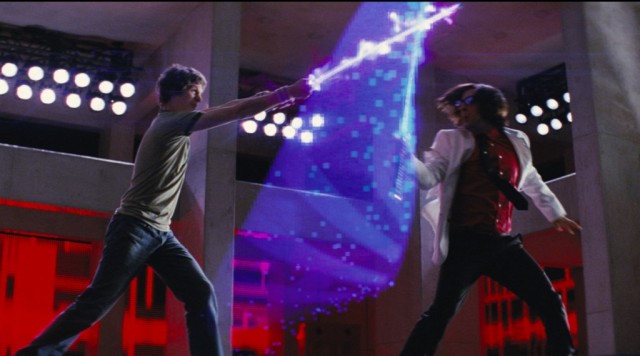 If any scene in Scott Pilgrim vs. the World showed how surprisingly adept at action sequences Wright is, it was the final sequence, experienced twice via an extra life. With the help of a blockbuster budget, Wright puts all the money to good use with wonderful fight choreography and a camera that allows that fight choreography to shine and not get lost in wild close-ups and fast cuts. Additionally, the fact that Wright manages to make Michael Cera, Jason Schwartzman, Mary Elizabeth Winstead, and Ellen Wong look like action stars and not make us think twice is a testament to how seamless the entire film is.

4. Shaun of the Dead — Second Tracking Shot to the Shop

One of the best scenes in Shaun of the Dead, Shaun’s second, hungover walk to the corner shop sees him miss out on a series of obvious signs that the zombie apocalypse has occurred including shuffling zombies in the streets, dead bodies, a man sprinting down the sidewalk, a bloody hand print in the shop, and more. Although the scene would work by itself, it’s aided by a mirror shot at the beginning of the film in which Shaun does the exact same walk in a similar haze making it obvious why Shaun might not pick up on some fairly obvious doomsday signs. Finally, it should be pointed out that both shots occur in one-take, tracking shots that allow the scene to play out in real-time and make the viewer increasingly anxious that Shaun is unaware of zombies inching closer to him. 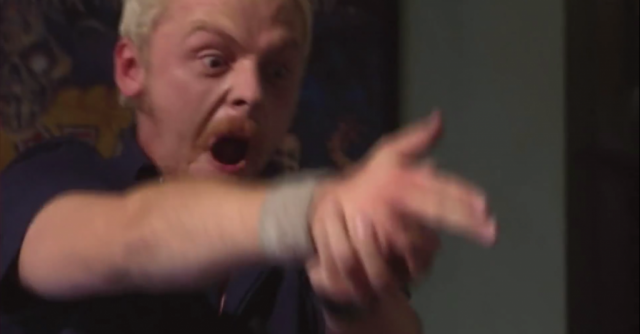 In a scene that shows Wright and Pegg’s love of shootouts years before they would make Hot Fuzz, Spaced’s Tim and Mike demonstrate the “unspoken telepathy” between men for Brian. How do they demonstrate this? Mike suddenly whips out an invisible shotgun causing Tim to drop his controller as they both start a make-believe gun fight in slow motion. As Brian looks on in confusion, Tim aims his fingers at Brian — but he’s out of bullets. Brian then fires back at him, igniting a three way make believe gun fight that grows to involve shotguns, machine guns, a grenade, and a knife thrown at a face. As all three lay on the ground dead, it becomes obvious that Tim and Mike have proven their point.

For the entire film, Hot Fuzz is hurtling towards an epic climax in which Angel will take up his guns once again — and when it finally occurs, it does not disappoint. What is so impressive about the action sequence — which lasts about 20 minutes — is that if you compare the action directly to some of the biggest films in the genre, it absolutely holds up. It’s thrilling, fun, and it doesn’t lose momentum despite how long the sequence is. But putting aside how spectacular the action is by itself, there’s also something even more important: the scene is hysterical. Angel is not taking down your average faceless goons like in most action flicks, but senior members of the community that would be better suited with needles and thread in their hands rather than guns. The result is a scene that works on so many levels that when you’re not laughing, you’re likely cheering.

Shaun and Ed’s first attempt at taking down zombies in Shaun of the Dead is probably the most iconic sequence in all of Wright’s filmography — and for good reason. Starting with a hysterical sequence in which the pair mistake the “girl in the garden” for a drunk girl and accidentally impale her, Shaun and Ed are then forced to find a way to stop two zombies in their backyard. Their strategy begins with a laundry basket full of objects meant to be thrown at the zombies’ heads, which probably wouldn’t work even if they could land their throws anywhere near the zombies. They then move on to throwing records, which becomes a task in and of itself because Shaun is picky about which records to throw except for the Batman soundtrack and Dire Straights. The sequence then ends with a charge through the shed door and a subsequent zombie beat-down with with a shovel and cricket bat.