While we all wax poetic about the insane box office number Hollywood has raked in over the course of 2015, it’s worth talking about the huge year television had as well. While not quite as quantifiable as the film medium in terms of money and success, what we do know is that 2015 featured some of the best stories we’ve ever seen on TV. Marvel debuted two new Netflix series, Mad Men closed up shop for good, and Doctor Who said goodbye to a companion.

There was plenty more that happened across every network and streaming service, and we’re going to highlight the best of the best for you to close out the year. There have been moments to make us laugh and cry, each of which shocked and surprised us in a different way. If you’re not caught up on your 2015 television, consider this your one and only spoiler warning: Proceed with caution (especially if you haven’t seen the latest season of Game of Thrones or The Walking Dead).

Widely lauded as one of the best superhero shows of all time, Netflix’s Daredevil found its crowning achievement in a single fight scene. The series showed off a unique visual language we’d never before seen in the comic book genre, culminating in a masterfully executed single-shot brawl early in the inaugural season. Even the stellar story of follow-up series Jessica Jones didn’t feature a moment on par with this one. Beyond all that, it marked a new era for stylistic superheroes on TV.

2. Silicon Valley, HBO: Richard gets Steve Jobs-ed out of his company

Much in the same way Steve Jobs was voted out of Apple, Silicon Valley showed us a much smaller, yet equally as heartbreaking moment for Richard to close out Season 2. The season featured a lengthy court battle over the intellectual property of Pied Piper, ending with Richard finding himself left out in the cold by his board of directors. Even in moments of victory after beating its rival in court, Pied Piper still found itself in a bittersweet position, in true California tech industry fashion.

3. The Walking Dead, AMC: Glenn dies (and then doesn’t)

Killing off a fan-favorite character is always a risky proposal for a TV series, and for a moment, it appeared as though The Walking Dead was going all-in on this strategy. Midway through the season, we see Glenn (Steven Yeun) tossed into a mob of walkers, thought to be brutally torn apart and dismembered. As it turned out, episodes later we find out he survived the encounter, while fans everywhere breathed a sigh of relief.

Few moments have been more talked about and analyzed more than the Season 5 finale of Game of Thrones. In it, Jon Snow is the victim of a mutiny at the hands of the Nights Watch, as he’s repeatedly stabbed, and left to bleed out right before the final credits role. There’s been a fair amount of evidence to support a miracle resurrection, but such an event would be virtually unprecedented in a Game of Thrones universe that mercilessly kills off your favorite characters. 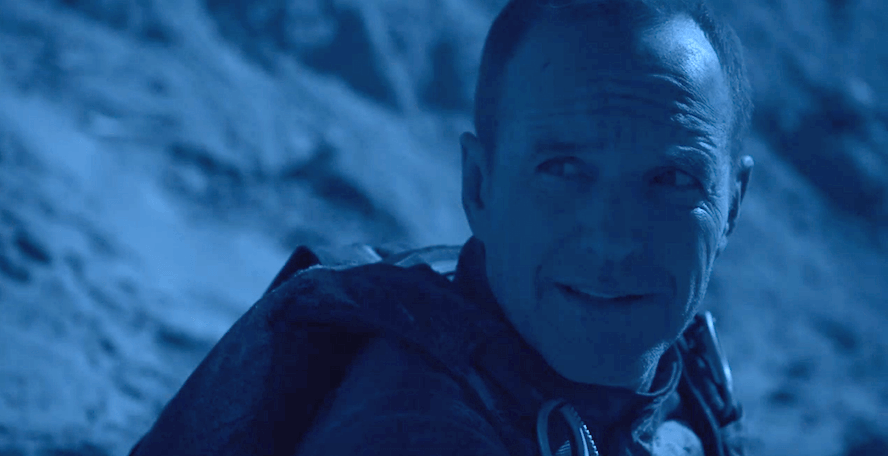 Try going back in time 20 years and explaining this one to a stranger on a street. Agents of SHIELD hit the midseason mark at peak insanity, featuring a journey through a bunch of liquid rocks to an alien planet, and the eventual murder of Grant Ward, as Phil Coulson crushed the former agent’s ribcage with his robot hand. Because this is the crazy-ass world of Marvel, Ward’s dead body was possessed by an ancient alien parasite, and reappears in the final moments, teased at as the next big bad opposing SHIELD. Yeesh.

The final season of AMC’s Mad Men was chock full of exciting moments, but none are quite on par with Peggy’s badass walk down the hallway of McCann Erickson. With a cigarette hanging from her mouth and too-cool-to-even-care sunglasses worn across her face, it was a moment of transformation for the previously mousy character. Mad Men will be remembered for a lot in the coming years, and few images will stick in our head more than this one.

Peter Capaldi’s run as the lead for the iconic Doctor Who has been subject to a fair amount of criticism. Over his two years in the role, we’ve often seen struggles with emotional weight and truly human moments for the otherwise alien Doctor. We were gifted with the most heartrending event of all though in the penultimate episode of Season 9, as Clara faces death head-on, marking her final days as a companion to the Time Lord.

8. Arrow, The CW: Felicity is shot down in a hail of gunfire

It’s been a bad year for fan-favorites, none more so than Arrow‘s Felicity Smoak. The show has been quietly teasing at a major character death all season long, and the midseason finale may have finally answered that question once and for all. After a romantic marriage proposal, Oliver and Felicity’s limo is shot up by a group of Damian Dahrk’s “ghosts.” Felicity takes the brunt of the gunfire, and things close out with what appears to be her final breath. Arrow has a habit of making death less than permanent though, so your guess is as good as ours as to whether or not it’ll stick.