The 15 Best Monologues On Late-Night TV

It used to be all fun, games, and musical guests, but the landscape of late-night television has changed drastically over the past several years. Our country has entered a period of complete divisiveness, and instead of turning on our favorite late night shows to escape, we turn towards them for facts and perspective.

Late-night TV show hosts like John Oliver, Trevor Noah, and Jimmy Kimmel have taken the reigns and are using their platforms to speak out about issues like gun reform, President Donald Trump’s policies, and everything in between. As a result, we’ve gotten some witty, honest, and heartbreaking monologues and segments on late-night TV. You’ll cry of laughter at Colbert’s farewell to a certain politician (page 9).

The royals have given us all a much-needed reprieve from what’s happening in America. From the birth of Prince Louis to the royal wedding of Prince Harry and Her Royal Highness, Meghan, Duchess of Sussex it’s been royal mania. Just after Louis’ birth, Late Late Show host James Corden welcomed the youngest prince into the fold.

However, Corden couldn’t quite curb his jealousy when he said, “The boy is now fifth in line to the British throne — right behind Harry Styles. But ahead of me, which is annoying. This is Kate’s third child in just five years. When she heard that, Meghan Markle was like, “Heh, we’re not all expected to do that, are we?”

Next: Seth Meyers said there were no moles in Trump’s campaign, but it was full of something else.

14. Seth Meyers drags Trump for his attacks on the FBI

We all know that President Trump is no fan of the FBI. In fact, he’s gone so far as to suggest that the FBI planted a spy in his 2016 campaign.  On Late Night with Seth Meyers, Meyers offered another alternative to Trump’s theory.

With a deadpan expression, he said, “President Trump yesterday accused former President Obama and the FBI. of placing a mole inside his 2016 campaign, when they knew full well that campaign was supposed to be weasels-only.”

He also pleaded with the POTUS to get off of Twitter. He explained, “It’s not fair that a president who won’t read a two-page press briefing makes us read a six-part Twitter rant.”

Next:  Stephen Colbert is sure the Trump administration is willing to overlook anything.

In February 2018, news broke that White House secretary Rob Porter was a violent, horrible man who had physically abused both of his ex-wives. This news should have come up in his background check, but the White House chose to ignore it. They also decided to defend Porter when the news broke.

Stephen Colbert was disgusted. On The Late Show, he let Trump and his administration have it. He said,

Now these are horrible, sickening revelations, so the White House had no choice but to defend him. White House aides knew about the allegations for months. You know who Trump ought to fire next? Every person who knew about this, and I’m guessing that’s everybody. Because this Porter guy didn’t exactly hide his temper. Is the Trump administration so desperate for people who are even mildly competent that they’re willing to overlook anything?

Next: Trevor Noah highlighted these differences between Trump and Oprah

Remember when everyone was in a frenzy because we thought Oprah Winfrey might run against Trump for president in 2020? Our favorite late-night hosts had a field day with that one. The Daily Show host Trevor Noah hilariously pointed out how different Trump and Winfrey are from one another.

11. Colbert gets gleeful over the Sean Hannity and Michael Cohen connection

Stephen Colbert went in on the Sean Hannity and Michael Cohen situation. | CBS

The revelation of President Trump’s affair with adult film star Stormy Daniels and the subsequent payoff that came as a result, has brought Trump’s legal team to its knees. In fact, Trump’s personal lawyer Michael Cohen is now under investigation by the FBI.

During one of Cohen’s hearings, it was revealed that Fox News host, Sean Hannity, was also one of his clients. On the Late Show, Stephen Colbert could barely contain his delight.

With a glass of wine in hand, while slouching over his chair, he said,

How did Fox News let him on the air with this massive conflict of interest? Did he not tell them? Or did he tell them and they just ignored it? I’m going to go with the first one, because I know Sean Hannity, and delivering factual information is not his strong suit. I gotta agree with Sean on this one: The media is spinning out of control. Did you hear about this guy on Fox News who’s defending Cohen without revealing that it’s his lawyer, too? That’s crazy!

Next: Seth Meyers thinks Rudy Gulliani is doing “great” at his new job.

With Cohen out, President Trump needed to find himself a new lawyer. Naturally, he phoned up his old friend, Rudy Gulliani, for help. Unfortunately, the former lawyer didn’t really do his homework. He immediately confirmed Trump’s’ affair with Stormy Daniels, though the White House had denied it for months.

Meyers was floored. He said,

He’s a former mayor and U.S. attorney who’s now the lawyer for the president of the United States, and Trump talks about him like he’s a trainee at Chipotle. “Excuse me, my burrito fell apart.” “I’m sorry, he just started yesterday. He’s a great guy. Rudy, you gotta tuck the tortilla! I’m sorry, he’ll learn. He’s a great guy.” Trump’s going to be the first client who pleads insanity on behalf of his lawyer.

Next: John Oliver gave us the tea on North Korea.

If we’re being honest, most Americans are pretty clueless about what’s happening around the world. Luckily, John Olivier has taken it upon himself to give us breakdowns of some of the most significant issues that we are facing as a nation on his show Last Week Tonight. One of those topics is the current tension between the U.S. and North Korea.

Oliver devoted an entire episode of Last Week Tonight to break down the North Korea crisis and President Tump’s tension with North Korean leader Kim Jong Un. To top it off, Oliver extended an olive branch to the country in the form of a Weird Al Yankovic accordion performance.

Next: Kimmel found himself in the middle of Fox News’ circus.

For a while there, Jimmy Kimmel found himself in an all-out war with Fox News host Sean Hannity. Hannity called Kimmel a clown and the Jimmy Kimmel Live! host was quick to clap back.

In April 2018, Speaker of the House Paul Ryan announced he would not be seeking reelection, but instead would be stepping down from his position. Colbert let him have it.

The comedian sarcastically exclaimed, “What? Working with President Trump is frustrating? That’s not what the last 30 people who quit said! Fare thee well, Paul Ryan, we’ll all miss your famous catchphrase: “No, I hadn’t heard what the president said, but if true, that is troubling’” Republicans are with you, Paul. And by “with you,” they mean leaving office in November.”

At one point he also called Ryan, “Crossfit Dracula.”

Next: Colbert was determined to win “The Eric Trump Memorial Award For Disappointment.”

6. Colbert is desperate for Trump’s disapproval 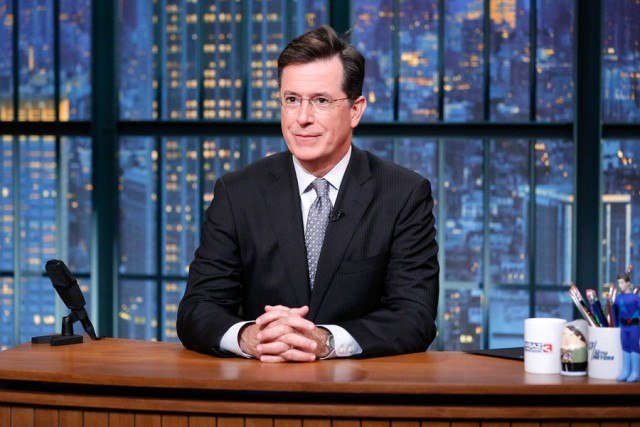 How long is Colbert willing to wait? | Comedy Central

In January 2018, Trump decided to start the new year by telling everyone that he would be announcing mock awards for the “most dishonest” and “corrupt” members of the media. Naturally, the late-night show hosts were frantic to win one of the prestigious honors.

On The Late Show, Stephen Colbert announced had taken out an entire billboard in the hopes that Trump would truly consider him for #TheFakies. He desperately wanted “The Eric Trump Memorial Award For Disappointment.” Colbert also used a quote from Fox News Host Sean Hannity calling him, “A horrible human being” in his entry.

Jimmy Kimmel opened up about his son’s experience. | ABC

One of the most gut-wrenching late night monologues in recent years came from host Jimmy Kimmel. Since President Trump spent the majority of his first year in office attempting to dismantle former President Barack Obama’s Affordable Health Care Act, many Americans who had been covered in previous years, lost coverage.

Kimmel used his own personal experience of watching his infant son, William “Billy” Kimmel, go through open heart surgery to plea for universal health care. Since Kimmel and his family have insurance and money, getting Billy the surgery he needed was a no-brainer, but the late-night host knew that is not the case for many Americans.

Next: Trevor was in disbelif over this verdict.

4. The #BlackLivesMatter case that broke Noah

Since stepping into his own as the host of The Daily Show, Noah has proven that he deserves a spot on late night. His comical and visceral responses to our current times are almost always spot on. However, it was the July 2017 acquittal of the police officer who shot and killed Black motorist, Philando Castile, that brought Noah to his knees.

He said, “It’s one thing to have the system against you — the district attorneys, the police unions, the courts — that’s one thing. But when a jury of your peers, your community, sees this evidence and decides that even this is self-defense, that is truly depressing. Because what they’re basically saying is, in America, it is officially reasonable to be afraid of a person just because they are black.”

Next: The perfect parody on racist microaggressions

Robin Thede might be new to the late-night game, but The Rundown With Robin Thede host is already making her mark. Her most brilliant segment to date was a legendary parody of Hulu’s The Handmaid’s Tale which presented a dystopian world where racial micro-aggressions are forbidden.

Thede describes it as, “After Trump caused a nuclear race war, white people outlawed any passive-aggressive racial pettiness.” Thede introduced her audience to the new world, The Hairmaid’s Tale (Blessed Be the Baby Hair).

In fall 2017, news of former Hollywood executive Harvey Weinstein’s rampant sexual abuse, misconduct, and assaults were made public, bringing forth the watershed #MeToo and #TimesUp Movements. Even before the long list of numerous predators across industries became public knowledge, Samantha Bee, one of two women in late night put the creeps of Hollywood on notice.

On Full Frontal with Samatha Bee, the host slammed Weinstein’s grotesque apology and also issued a warning. She said, “We know who you are. Women talk to each other, and we talk to journalists, and we talk to lawyers. It’s 2017, we don’t have to put up with this s—t. We are coming for you.”

Next: Colbert stands firmly with the Parkland teens.

1. Colbert is done with adults after the Parkwood shooting

On Feb. 14, 2018, we watched in horror as 14 people (mostly kids) were shot and killed at a Florida high school. Since then, the students have stood up to challenge the government and adults for stricter gun laws. The tragedy seems to have brought out the best in young people and the very worst in adults who have mocked and tried to discredit children.

Colbert stands firmly with the kids. On The Late Show, he proclaimed,

I hope these kids don’t give up because this is their lives and their future. Someone else may be in power, but this country belongs to them. And there is reason for hope: Look at the #MeToo movement. A lot of men in power did not see that coming, but it proved that change can happen overnight. And this is an election year — so if you want to see change, you have to go to the polls and tell the people who will not protect you that their time is up.

Read more: This Is Why Oprah Is Still the Richest TV Host in America