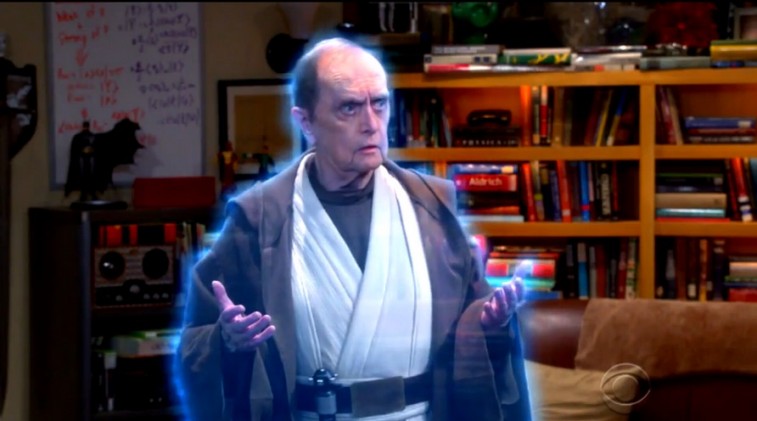 The Big Bang Theory has aired several Star Wars-themed episodes over time, like the one in honor of The Force Awakens. Of course, that was not the first time the show’s geeky group has expressed their love for the iconic franchise. The sitcom is constantly paying homage to Star Wars, from quotes to lightsaber props. Here’s a look back at 10 of the best Star Wars references on The Big Bang Theory:

Who could forget Sheldon hilariously trying to choke Leonard, Raj, and Howard using the Force in the premiere episode of season three, “The Electric Can Opener Fluctuation?” Sheldon is furious after learning that the guys messed with his results in the North Pole. Later, Raj later pretends that his attempted choke hold is actually working in an effort to make him feel better.

How does everyone know when Sheldon’s unhappy? He goes all Darth Vader. One of the best examples? When he finds out he’s being forced to work with his work frenemy, Kripke, Sheldon expresses his dark mood by playing his preferred angry music – the “Imperial March” song.

In “The Weekend Vortex,” the 19th episode of season five, the guys make plans to spend all weekend playing the new Star Wars online game. When they inform Sheldon of the plans, he spins into an excited frenzy (seen in the clip above) and immediately says yes – much to the displeasure of Amy, who was counting on him to go with her to her aunt’s birthday party. Cue the tension.

7. Boba Fett helmet vs. a bird

Star Wars memorably pops up once again in “The Ornithophobia Diffusion,” episode nine of the fifth season. In the episode, Leonard rents a Star Wars movie on Blu-ray. Sheldon wants to watch the film, but is distracted when a bird flies into the apartment. Being afraid of birds, Sheldon puts on a Boba Fett helmet while trying to shoo it away. But the fear doesn’t last long – by the end of the episode, he and the bird are best friends.

Raj and Howard often draw comparisons between Sheldon and the Star Wars droid, C-3PO. Case in point? In season two, episode 21, “The Vegas Renormalization,” the gang is playing a game of 20 Questions. It’s Leonard’s turn and as the rest of the group tries to guess the answer, they inquire, “Were you in all six Star Wars movies?” and, “Do you kind of look like a shiny Sheldon?” Of course, the answer to both is yes, leading them to correctly identify C-3PO. Sheldon, in his usual fashion, doesn’t see the connection, but takes it as a compliment.

“The Skywalker Incursion,” the 19th episode of the eighth season, brings Sheldon and Leonard to – you guessed it – Skywalker Ranch. The two are on their way to give a lecture at UC Berkeley and decide to make a pit spot in Star Wars director George Lucas’ headquarters. Upon arrival, the security guard won’t let them in – but, because only Star Wars can throw Sheldon into an illogical frenzy, that doesn’t stop him from attempting to run in. He ends up getting tased and both he and Leonard get thrown in a detention room with other Star Wars maniacs, missing the lecture in the process. 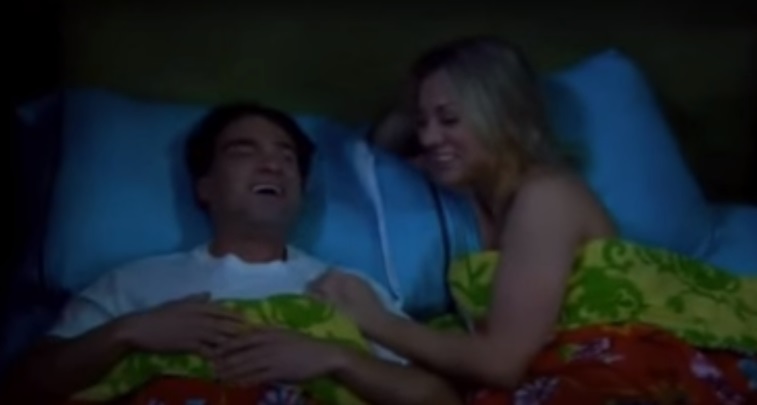 In “The Wheaton Recurrence,” episode 19 of season three, Star Wars once again proves to be the catalyst for something much bigger. In the episode, Penny quotes Yoda to Leonard while in bed and even correctly identifies the movie it came from. “Oh, my God. I’m lying in bed with a beautiful woman who can quote Yoda,” Leonard responds. He then tells Penny he loves her for the first time – to which Penny awkwardly responds “Thank you.” Ouch. Needless to say, the two must deal with some tension in the rest of the episode.

Lightsabers pop up on The Big Bang Theory often. Howard has a pair hanging above his bed and Leonard also has one in him and Sheldon’s apartment (which he uses as a source of light during a blackout in one episode).

But perhaps the funniest lightsaber moment comes in the seventh episode of season seven, “The Proton Displacement.” Raj makes belt buckles with tiny lightsabers for him and Howard so that they can have “sword fights” (cue the sexual overtones).

2. May the Fourth special

One of the show’s biggest Star Wars moments came with last year’s themed special “The Proton Transmogrification.” Timed to coincide with May the Fourth celebrations, the episode was jam-packed with countless, clever Star Wars references. Some examples? Raj introduces the Admiral Ackbar’s Snack Bar full of items, like “R2-Decaf,” “Cafe Au Leia,” and “Attack of the Scones.” Amy and Bernadette bake a Death Star cake. Most memorably? After Sheldon misses Professor Proton’s funeral, he appears in Sheldon’s dream as an Obi-Wan, complete with Jedi robes and a light saber.

Star Wars and The Big Bang Theory collided in an awesome way when franchise stars James Earl Jones (who voiced Darth Vader) and Carrie Fisher (Princess Leia herself) both made a cameo in Episode 14 of Season 7, “The Convention Conundrum.” Sheldon meets Jones in a restaurant after a failed attempt to set up his own Comic-Con. Unlike the other celebrities Sheldon has met, Jones takes a liking to Sheldon and the two end up embarking on a jam-packed night filled with ice cream, karaoke, and even a strip club. Towards the end, they also prank Fisher by knocking on her door and running away. Fun fact: that was the first time Jones and Fisher had met in person. Now that‘s how you pay homage to Star Wars.