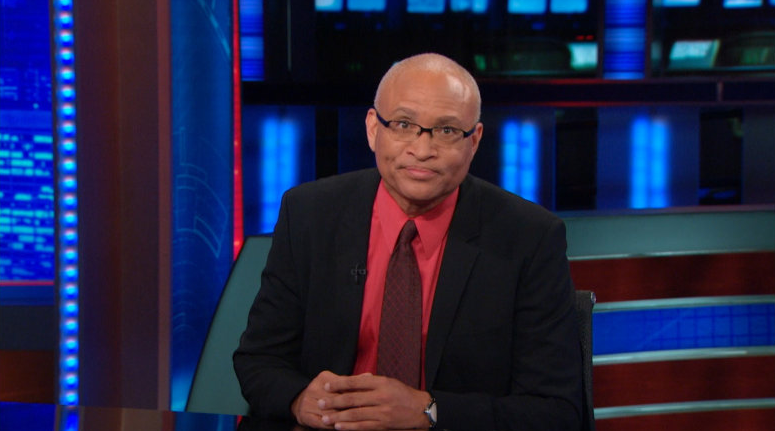 Ever since Stephen Colbert was tapped to replace David Letterman on The Late Show back in April, fans of the soon-to-be-extinct Comedy Central talk show The Colbert Report have been wondering how the network will fill Colbert’s 11:30 p.m. spot after The Daily Show with Jon Stewart. Now Comedy Central has announced that The Daily Show’s “Senior Black Correspondent” Larry Wilmore will host the new show The Minority Report with Larry Wilmore in the slot left in the wake of the beloved Colbert Report’s end.

It had been speculated that a Daily Show personality would move to replace Colbert after CBS announced that the comedian was their pick to replace Letterman. Colbert and his wacky personality parodying right-wingers began his stint on Comedy Central as a Daily Show correspondent, but grew so popular that he was given his own show airing immediately after The Daily Show in 2005. The Colbert Report eventually became as popular as The Daily Show and is one of the most unique talk shows on television.

According to an announcement from Comedy Central seen by Variety, The Minority Report will premiere in January and occupy the 11:30 p.m. Monday through Thursday slot. Comedy Central said that the show will “offer a comedic look at news, current events, and pop culture from unique perspectives not typically on display in late-night television.” There’s been some shuffling around in the late-night lineup of network television recently, with Jimmy Fallon replacing Jay Leno in February as well as Colbert taking over for Letterman, but noticeably all the major hosts are still white males.

“While Larry Wilmore is a brilliant comic and showrunner, this is all just a complicated ruse to get him to move to New York and turn him into a Knicks fan,” said Jon Stewart in the announcement, per Variety.

“I’m beyond excited to have this chance to continue my relationships with Comedy Central and the brilliant Jon Stewart. I love the city of New York and promise to only wear my Laker T-shirts when I’m layering,” Wilmore responded.

Some have argued that Colbert’s decision to abandon Comedy Central and the zany persona he used on The Colbert Report was a terrible decision both for his own career and for television as whole. CBS could have chosen any white male comedian to replace Letterman, but fans believe no one can adequately fill Colbert’s shoes. While Colbert will be missed by many — mostly everyone besides Bill O’Reilly — Wilmore getting the chance to lend an African American voice to late night comedy may mean that Colbert’s move isn’t so bad for television after all.