The DC Universe May Be Working on a Superhero Comedy 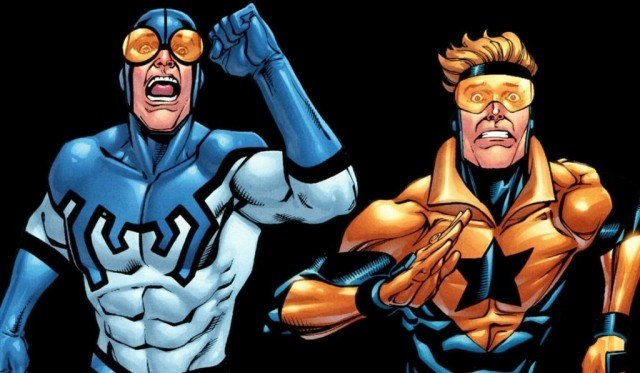 While Warner Bros.’s upcoming Batman v Superman: Dawn of Justice will mark a dark and somber entry into the DC Extended Universe, it looks like the studio is making an effort to ensure that not all of the comic-inspired movies in its lineup are quite so serious. Both The Flash and Shazam are expected to be funnier in tone, and now it’s rumored that a third lighthearted movie could be in the works – this one centered on the quirky superhero duo Blue Beetle and Booster Gold.

Blue Beetle is a character that first appeared in 1930s, but the version that’s best known today is that of Ted Kord, a brilliant inventor who fights crime using his martial arts skills and the specialized equipment he created himself. He often partners with Booster Gold (seen above), a time-traveler from the future who uses advanced technology and his knowledge of both the past and present to turn himself into a full-fledged a hero. The two were both members of an incarnation of the Justice League, where they got into all kinds of funny adventures, and continued their partnership on-and-off for years beyond that. But while the two are some of the most colorful heroes in the DC archive, they’ve remained relatively obscure up until this point. Now, that could all be about to change.

The Tracking Board reports that Warner Bros. is interested in having the two characters star in what’s being described as a “superhero buddy cop movie.” Comedy will be a big emphasis in the movie, which would mark a drastic change of pace from the gritty Man of Steel and Batman v Superman. But that’s not the only notable part of the potential project. Per the report, Greg Berlanti, executive producer of DC shows Arrow and Flash and the upcoming Legends of Tomorrow and Supergirl, has been recruited to produce and direct the film.

One important thing to emphasize here: Warner Bros. has yet to comment on the rumored Booster Gold and Blue Beetle project, so there’s always a chance that this is all talk and could not end up going anywhere. Still, if it is currently in development, there are a couple of good reasons to be excited. For one thing, as previously stated, it would mark a refreshingly different approach from the DC-inspired films we’ve seen recently, all of which have been serious, somber, and even more serious. It would also signify a new take on the superhero genre, which has seen plenty of solo and team-up movies, but not many buddy pictures. That kind of twist could help set the movie further apart.

Since the studio would clearly be looking to mix things up with the movie, bringing Berlanti on board also seems like a good choice. The producer has experience successfully adapting comics to the screen, from the edgier Arrow to the lighter and funnier The Flash. Hopefully, he would be able to do the same in a feature format. This wouldn’t be his first attempt to do so – he previously penned the original script for 2011’s Green Lantern, but the screenplay was later rewritten.

While making a movie about two obscure heroes may seem like a long shot to some, it could also be a great opportunity for Warner Bros. Should it move further into development, the project would give the studio the chance to step out of the Batman/Superman mold and show some Marvel-style leadership by bringing a set of mostly unknown characters into the mainstream (as Marvel did with Ant-Man and Guardians of the Galaxy, among others). At the very least, it’ll prove that it’s willing to mix things up and make the DCEU a little more versatile.

We’ll have to stay tuned to hear more. In the meantime, the second title in DCEU, Batman v Superman, will hit theaters on March 25, 2016.