ABC already has several mystery-driven thrillers on its lineup, but its new title, The Family, stands out all on its own. The show, which centers on a family thrown into upheaval by the return of a son who went missing 10 years earlier, is one of the strongest drama entries from the network in recent years, in large part due to its stellar ensemble cast.

Starring Academy Award-nominee Joan Allen, Rupert Graves, Zach Gilford (Friday Night Lights), and Alison Pill (The Newsroom), The Family — which is perhaps best described as part serialized mystery and part political drama — jumps to action surprisingly quickly. Without giving away any spoilers, the pilot episode opens with shots of a disoriented and unkempt Adam Warren (played by an eerily understated Liam James) stumbling out of the woods and making his way into town. At a police station, he identifies himself as the same child who disappeared a decade ago and has long since been presumed dead. “I’m him,” he says pointing to a photo in a newspaper article about his disappearance and the consequent arrest of his neighbor Hank (Andrew McCarthy), who was convicted of his murder.

With those two words, the show quickly flashes back to paint a bigger picture of Adam’s disappearance and the lingering effects it had on his family. We soon learn that 8-year-old Adam was abducted at a campaign event where his mother Claire (Allen) was running for City Council. Now the mayor of the fictional Red Pines, Maine, Claire is just about to announce her candidacy for governor when Adam resurfaces, throwing both her professional plans and her family life into turmoil. It’s a strange concurrence that we see again and again: the threads of Adam’s disappearance and Claire’s strong political ambitions running parallel to each other only to suddenly tangle together at a crucial juncture.

As the Warren family tries to help Adam adjust back to life at home, it’s clear they’re not the same people they once were. All of them are facing their own problems — some secret (religious daughter Willa’s whispered confessions in church), others not so much (eldest sibling Danny is a known alcoholic). Yet they’re all grappling with similar disturbing questions over Adam’s return. What has he gone through? Who took him? Will he ever be the same? And the big one: Is this even really him? 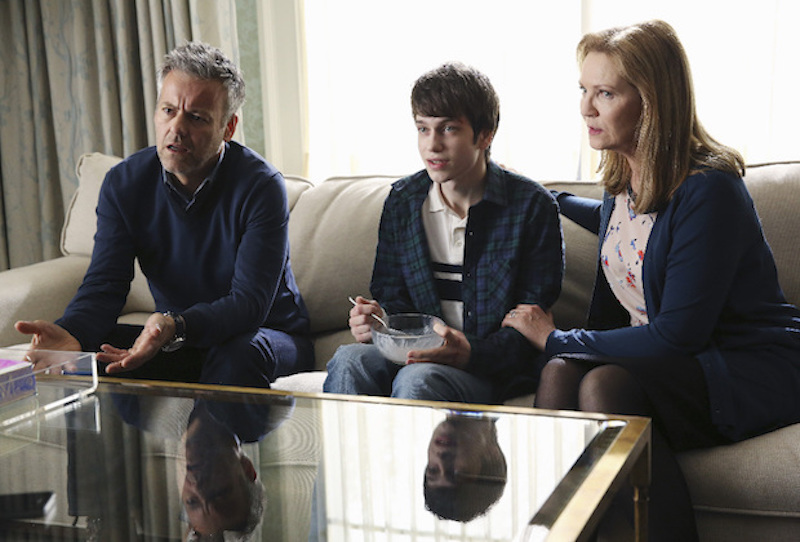 The Family hails from Jenna Bans, who previously served as a writer for Shonda Rhimes‘s Grey’s Anatomy, Private Practice, and Scandal, and the lingering influence is clear — but in the best way possible. The series moves at just the right pace, laying out its central mystery quickly without showing its full hand too soon. Like Scandal and also Rhimes’s How to Get Away with Murder, this is a show about maintaining public appearances in the wake of personal downfall. But it’s not as much about actual politics as it is about the political practice of burying lies and secrets with more lies and secrets — all the while plastering smiles on for the cameras, of course.

The story is compelling on its own, but it’s the acting that takes The Family to the next level. As expected, Allen is truly superb, playing Claire with such nuance that you’re never quite sure how you feel about her. It’s impossible not to feel for Claire in the moment when she lays eyes on Adam for the first time in 10 years. As her built-up resolve crumples into heart-wrenching sobs, you can’t help up but tear along with her. But other times, she seems like a monster completely blinded by professional ambition. Case in point? The stomach-turning scene in which she uses Adam’s recent return as a bullet point in her speech announcing her run for governor — made worse by the fact that her entire shell-shocked family is standing behind her as she does it.

Pill and Gilford also deliver strong performances as Adam’s older siblings, who — while wildly different in temperament and ambition — both clearly have a lot more to them than meets the eye. McCarthy also proves to be a real draw as the convicted neighbor who continues to harbor plenty of terrifying secrets, even after he’s proven innocent.

Given the subject matter, The Family is not always easy viewing and it remains to be seen whether the show can maintain its gripping tone for the long haul. But between the stellar talent at its foundation and the promise of plenty more thrills, the midseason show is one new drama worth spending your time on.

The Family will premiere on Thursday, March 3, at 9 p.m. ET on ABC, before settling into its regular Sunday night timeslot at 9 p.m. ET.