The Fatal Flaw of ‘Gotham’: Batman Without Batman 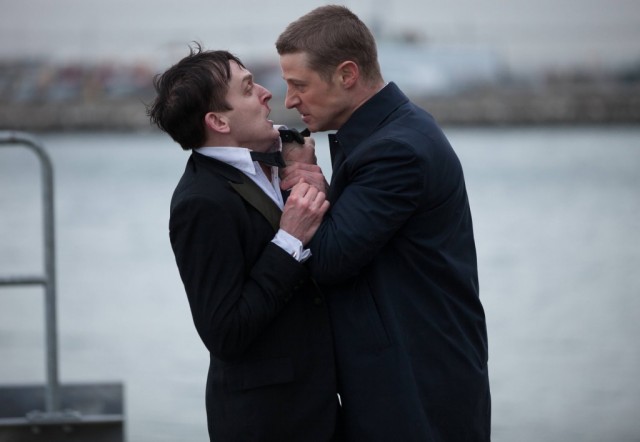 Back when it was first announced that there would be a Batman-themed network show called Gotham, excitement ran high. Sure, we were never promised any actual Batman appearances, with the show focusing on the early years of the eventual Police Commissioner Jim Gordon. But what originally seemed like an interesting and gritty high concept has managed to fall flat in just 11 episodes. In their review of the last episode of the show entitled “Rogues Gallery,” AV Club tied the show’s main issue into a tidy bow:

Gotham wants to be too many things at once, and it’s to the detriment of narrative precision and intrigue.

The show’s scattershot approach can largely be attributed to trying to compensate for its being one thing: Batman sans Batman. Without the Caped Crusader patrolling the streets of Gotham (in this series he’s a small child learning how to be dark and broody and stuff), the show is forced to throw everything else the comic mythos has against the wall to see what sticks. In doing this, we as an audience have to accept the coincidence of Catwoman, The Penguin, and the rest of the city’s assortment of villains all happening to intersect and interact at just the right time pre-Batman.

For an origin story to function in the way Gotham attempts to, the intersecting stories have to feel organic, well put together, and coherent. But what is happening instead is a show that’s forcing a whole lot of square pegs into round holes. Everywhere you turn, there’s a series of nods to what the future of the city holds, but with no further observation into a series of stories with the potential to be wildly interesting.

A confusingly nimble and acrobatic child, Catwoman apparently watched from afar as Bruce Wayne’s parents were gunned down, but spends a fair amount of the show silently looking on as things happen around her. The Penguin is an exiled former mobster with designs of running the Gotham underworld through the power of creepy smiling and umbrella-holding, but spends most of his time on the periphery showing up when the writers decide he’s needed. The big bad of the series so far is the mafia, but that’s managed only to make Gotham into more of a crime procedural than an origins story.

The real problem, though, is shared by its similarly conceptualized predecessor Smallville, featuring a young Superman coming into his own: It moves toward an inevitable end we’ll never get to see. It’s not directly tied into its respective movie universe like Agents of SHIELD, so it doesn’t offer any big picture value to its audience. Instead, it tried to focus on one of the most iconic cities in any comic series, but lacks any focus in doing so. In the show’s attempt to lend credence and depth to every aspect of Gotham, it ends up giving us only a shallow look at each.

Sometimes it’s a show about Jim Gordon acting as the only moral man in an immoral city. Other times it’s about Bruce Wayne dealing with his grief with creepy drawing and yelling at his butler. Then we’ll cut to maneuvering and shifting within the crime universe that often has no bearing on what’s happening in our other plot points. Simply put, too much is happening in too many places.

Without the great unifier that Batman (or any superhero in a comic story) represents, the pieces of the plot are held together with popsicle sticks and Elmer’s glue. Imagine a Metropolis show without Superman. Or even a Starling City tale told without the Green Arrow. Taking the main protagonist out of a mythos and hoping it still holds water is, at its core, a losing battle. Moving forward, Gotham will either have to own this and improve in spite of it, or let that be its eventual downfall.