‘The Flash’ Is About to Bring Back 2 Important Characters

The Flash is bringing back two familiar faces for its next episode. As revealed in a just-released season two promo, the villainous Grodd the gorilla is set to make a big return in the November 17 episode, as is Barry Allen’s recently freed father, Henry Allen.

The episode, appropriately titled “Gorilla Warfare,” picks up after last week’s huge face off against the new big bad, Zoom (voiced by Tony Todd). The battle has left Barry (Grant Gustin) badly bruised, beaten, and without his speed. Unfortunately for him, it looks like he won’t have much time to recover.

Per the CW’s official synopsis for the episode, Barry is forced to snap back to action after Grodd (voiced by David Sobolov) returns to Central City and kidnaps Caitlin Snow (Danielle Panabaker). He and the rest of the STAR labs team must then race to find her before it’s too late.

This will mark Grodd’s first time back to Central City since season one, when he caused plenty of trouble kidnapping Joe and aiding the evil Dr. Harrison Wells (whose real identity was that of Eobard Thawne). The character quickly became a fan favorite among comic book fans, simply because he was so awesomely insane. Seriously, a crazed telepathic giant ape who lives in the sewer system? What’s not to love?

Now, Grodd is back, angry as ever, and with a new mission on the mind — to make “more like him.” You know what that means: baby Grodds. What exact role he wants Caitlin to play toward that remains to be seen, but it’s safe to say she’s probably none too thrilled to be a part of it.

Grodd’s not the only one set to make a return in “Gorilla Warfare.” Barry’s dad Henry is also coming back to Central City after he was finally exonerated of his wife’s murder and freed from prison. 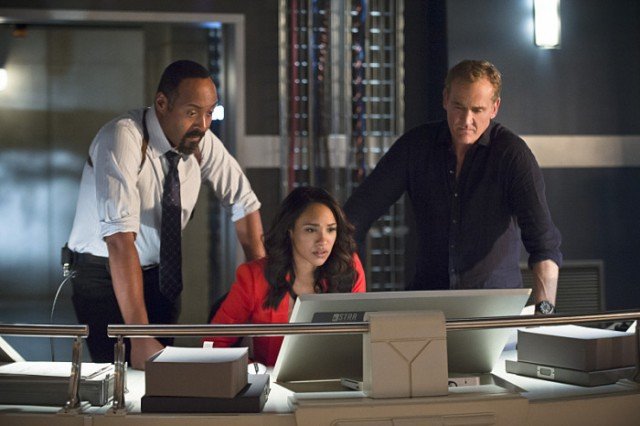 As fans will remember, Henry was released from jail and reunited with his son after years of being wrongfully convicted — only to then abruptly skip town. It was a move that took many viewers by surprise, especially since Barry and Henry were reunited for only hours before the latter decided to leave again. It was also particularly odd considering that Barry had basically been working toward freeing his dad his entire life. At the time, producers assured fans that they hadn’t seen the last of Henry — and it looks like they’re sticking to their word.

As captured in the photo stills from the upcoming episode (seen above), Henry returns to town, presumably to visit his badly injured son as he attempts to recover. Hopefully, the episode will also provide some explanation as to why he left so quickly and awkwardly in the first place, as it’s safe to say we’re all awaiting some clarification.

In addition to the return of Grodd and Henry, there’s also plenty of drama happening elsewhere, especially when it comes to romance. Cisco (Carlos Valdes) is planning his first date with the Jitters barista, Kendra Saunders (guest star Ciara Renée), whose superhero identity is Hawkgirl. Meanwhile, Patty (Shantel VanSanten) is starting to suspect that Barry is hiding something from her.

With Barry still recovering from his fight with Zoom and two important characters back on the scene, it’s clear audiences are in for one jam-packed episode.

The Flash airs on Tuesdays at 8 p.m. ET on the CW.