‘The Flash’: Why Gorilla Grodd Is the Show’s Best Villain

CW’s The Flash is jam-packed with interesting characters. We have the titular hero himself, a wisecracking 20-something still unsure of his place in the world. Past him, there’s his adoptive father figure, the Star Labs team, and, of course, a wide variety of villains. In the comics, the “Rogues Gallery” for our scarlet speedster is right up there with that of Batman’s. Even outside the Rogues though, The Flash has traditionally had some of the crazier bad guys DC has to offer. Foremost among these: Gorilla Grodd.

For those who are unfamiliar, Grodd is a giant telepathic ape genetically engineered to possess super-intelligence. He was teased at for the better part of the first half of Season 1 last year before finally getting his own coming out party as it were. He hasn’t been heard from since then, and only showed up again in Season 2’s appropriately titled “Gorilla Warfare” episode. In just those two headlining appearances, Grodd has proven himself to be The Flash’s most important villain, and here’s why.

1. Gorilla Grodd tells us just how far The Flash is willing to go 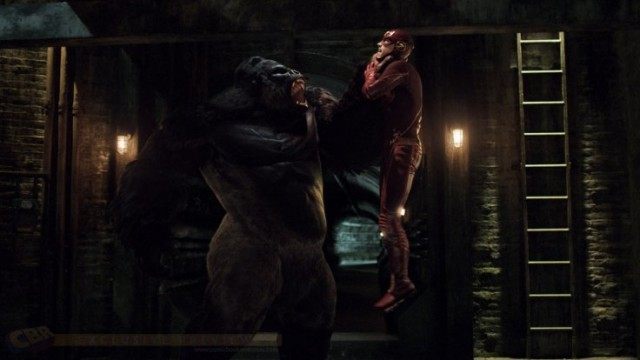 In terms of the the mythos behind The Flash comics, it’s one of the crazier ones. It’s full of things like time travel, multiple universes, different Flashes in each of those universes, and villains like King Shark (an aptly-named half man/half shark). It’s an obstacle any TV show or movie has to overcome when diving into the source material, and bringing Gorilla Grodd in early on shows that the CW is willing to go full ham.

The presence of Grodd sets the tone for the rest of the Flash’s universe, telling viewers loud and clear: Anything is fair game. If you can put a freaking telepathic talking gorilla on TV, things like the multi-verse and alternate realities seem that much more doable.

2. It doesn’t distract from the main story

Shows like The Flash and Arrow have a habit of breaking from their main plot threads for one-off villain-of-the-week escapades. In the case of The Flash, it usually involves some evil meta-human we probably won’t see again, and in a lot of ways it takes us out of the flow of the series. Grodd though carries direct ties to the primary story. In Season 1, we find out that Harrison Wells (later revealed to be the Reverse Flash) was the one who helped create Grodd, and in turn manipulated him into doing his bidding.

A season later, we’re still seeing pieces of that origin driving the story forward. Earth-2 Harrison Wells is used to trick Grodd into cooperating, knowing that the gorilla only obeys (who he thinks to be) the Reverse Flash. Even their vanquishing of Grodd through a wormhole and into Earth 2 makes it easy to stay on track with the greater goal of beating the season’s main villain, Zoom. He’s a character that’s a spectacle when he’s on screen, but isn’t a distraction when he’s the focus of an episode.

3. When he’s featured, Grodd is the most entertaining villain the show has to offer

There are plenty of exciting villains we’ve seen featured over The Flash‘s almost two seasons. From the spectacularly cunning and evil Reverse Flash played by Tom Cavanaugh, to Wentworth Miller’s delightfully mustache-twirling Captain Cold, there’s no shortage on top-notch performances. But it’s Gorilla Grodd who manages to steal the spotlight, as the villain who stands apart from all his contemporaries.

Grodd’s own motivations are decidedly different than other characters; in Season 1, he was a newly self-aware psychic ape. Season 2 has him searching for companionship, albeit through kidnapping and killing. The bottom line here is that there’s nothing more entertaining than a giant gorilla acting as a headlining bad guy for a network TV show. It’s ballsy for any show to double-down on the most insane elements of its source material, and it’s downright fearless that The Flash was even willing to consider the possibility.