The Girls Are Back in Town: Kristen Wiig to Helm ‘Bridesmaids 2′ 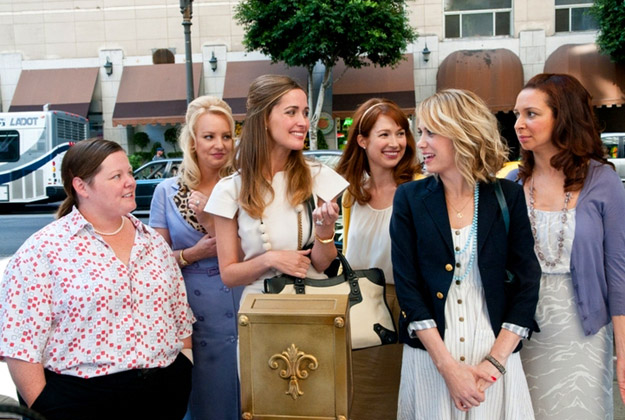 Bridesmaids turned the gross-out comedy on its head in 2011. The frat-boy subgenre — engendered in the late-70s with Animal House and invigorated in the early-aughts by Judd Apatow and Adam McKay — has long been a boy’s club, full of penis jokes and crushed beer cans, inebriated man-children doing stupid things because why not? Apatow injected a dose of maturity into his 2007 hit Knocked Up, which didn’t so much substitute adult life lessons for jokes, but integrated them, showing us that maturity and fun can co-exist in movies, as in real life.

But the Kristen Wiig-penned Bridesmaids, directed by Freaks and Geeks creator Paul Feig, expunges the boys and lets the girls have fun. It proudly parades its female characters covered in gross stuff, flaunting their potty-mouths and their bad decisions. If boys can be gross and stupid, why can’t girls?

Wiig’s screenplay channels her Saturday Night Live days (or nights, rather), stringing together a series of sketches and gags held together by the vague semblance of a story. The movie was a surprise hit and earned rave reviews; Wiig’s screenplay earned an Oscar nomination, as did Melissa McCarthy for Best Supporting Actress (a decision that was wildly praised, but in subsequent years may cause people to scratch their heads.)

Now Wiig is writing a sequel, according to Time. A lot has been said on more progressive pop culture sites and in astute magazines about the continued lack of women in Hollywood — correction, not the lack of women, because they’re definitely there, they definitely exist, but rather the lack of women-directed films, and women-lead films, by major studios. (The indie film world is a vastly different story.) Wiig writing a sequel, which will surely be a box office hit, is a good thing in that it further supports the notion that films written by, directed by, and starring women can actually make money at the box office (which is all producers care about anyway.)

As Cate Blanchett said in her Oscar acceptance speech, people do want to see movies that star women. But does that movie have to be a sequel to Bridesmaids? Can’t Wiig write something else, preferably something where the most notable gag isn’t Melissa McCarthy pooping in a sink? Apparently, American studio heads need to take baby steps. You have to crawl (to the nearest toilet, most likely) before you can walk before you can let a woman write and direct an original, serious movie.

Wiig’s been busy since Bridesmaids. She was completely wasted in Ben Stiller’s pretty — and pretty empty – The Secret Life of Walter Mitty, a would-be blockbuster that failed to recoup its budget. But her brief, in-voice only cameo in Spike Jonze’s brilliant Her, as a sex-crazed woman who wants to be choked by a dead cat while making love (“love”), was more memorable than anything in Stiller’s movie, anyway. She’s also lent her voice to How to Train Your Dragon 2 and the upcoming animated comedy Sausage Party, also featuring Seth Rogen and the usual gang of idiots.

It’s great that a major studio is letting Wiig write, and most likely direct Bridesmaids 2, especially since Paul Feig, with all due respect to the late, great Freaks and Geeks, has very little understanding of how to stage visual jokes, a problem Judd Apatow has been actively trying to solve in his own films (Adam McKay is quite good at the visual gag, though, so give him credit there.) Wiig has never directed a film, but her experience with SNL should influence her ability to set up and capture visual jokes. Perhaps with some long takes? Hopefully she’s been watching some Jerry Lewis and earlier Jim Carrey movies, or the trailer for Dumb and Dumber To.