The good news: Joel McHale, former Community star, ex-host of The Soup, and mocker extraordinaire, is officially back on TV. The bad news: His new CBS comedy, The Great Indoors, fails to live up to his past small-screen projects, despite McHale’s best efforts and the help of a promising supporting cast.

Created by Mike Gibbons (Tosh.0), The Great Indoors stars McHale as Jack, a thrill-seeking adventure journalist for Outdoor Limits magazine. A lone-wolf type, he has made a legendary career out of hunting down stories the old-fashioned way: by hitting the streets — or in his case, the mountaintops. But things change when his longtime friend and boss, Roland (Stephen Fry) summons him back to the office to reveal that the print magazine has gone under and the content is being shifted to a digital-only format.

Jack is soon coerced into supervising the web team, composed of three self-involved millennials: online content curator Clark (Christopher Mintz-Plasse), social influencer Emma (Christine Ko), and digital conversation specialist Mason (Shaun Brown). Though full of social media know-how and buzzy article ideas like “Best Outdoor Gear for the Zombie Apocalypse,” the three have no actual outdoorsy experience and all think of Jack as some sort of ancient dinosaur. “He’s like the human equivalent of dial-up,” Clark says about him in the pilot.

And so the relentless generation gap jokes begin. Just in case we weren’t already aware of the vastly differing attitudes between Millennials and Gen-Xers, the first two episodes of The Great Indoors does nothing but drive the point home. Clark hosts a podcast, despite having nothing of real note to say. Typical millennial. Jack has an outdated website featuring the dancing baby from Ally McBeal. Typical old guy. And on and on and on. 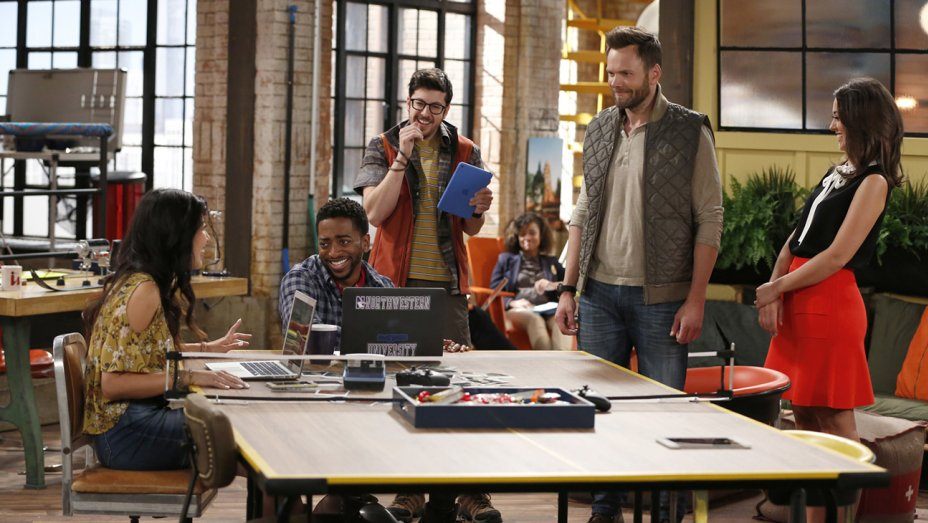 The endless generational quips not only become repetitive and grating, but they also confine each of the characters to stereotypes. No one can deliver a scornful one-liner like McHale, but that skill is mostly wasted here, as he’s relegated to the same “What’s with these kids?”-type dialogue over and over again. Of the three mostly one-note millennial characters, Mintz-Plasse’s nerdy, overeager Clark has the most heart, although he also strays into cliché territory from time to time.

Adding to the uneven workplace chaos? Roland has put his daughter, Brooke (Susannah Fielding), in charge of overseeing Jack and the web team. But what he doesn’t know — and what any regular TV watcher will see coming from a mile away — is that the two have previously hooked up. Because, of course.

When the show isn’t so caught up overly affirming its premise, there are moments where you can glimpse its potential. Jack and Clark share a warm exchange in the pilot that hints at the possibility of a funny, but sincere, friendship. And Ko and Brown can both deliver a solid punchline, if only their characters weren’t so monotonous. But to uncover these relationships and get to the actual funny stuff, The Great Indoors has to move past its superficial Gen-Xers versus Millennials set-up — and the sooner it does that, the better.