‘The Hateful Eight’: Different Than Any Other Tarantino Film 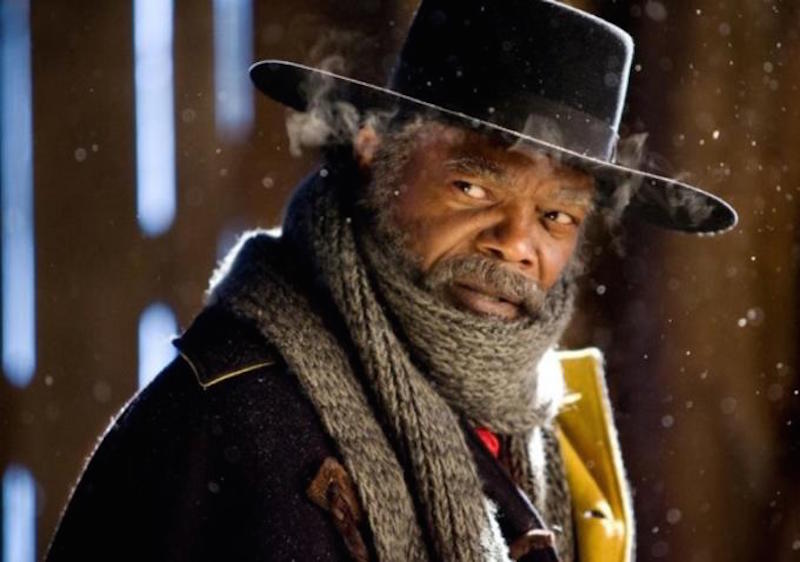 When Quentin Tarantino decided to resurrect the long-dormant format of 70 mm film used in the crowd-pleasing studio epics of the ‘50s and ‘60s like Ben-Hur, he used it to make his most difficult film yet — one where every ounce of throwback B-movie fun is counterbalanced by a sense of timely hopelessness. The Hateful Eight is a mean film that uses the tropes of the Spaghetti Western to explore the past and present patterns of American history.

Tarantino begins his eighth film with a suitably epic sweep, as a wagon winds through a worsening blizzard in the picturesque Rocky Mountains shortly after the Civil War, on its way to the town of Red Rock, Wyo. Inside the wagon is the bounty hunter John “The Hangman” Ruth (Kurt Russell, doing a blustery John Wayne impression), handcuffed to the feral female outlaw Daisy Domergue (Jennifer Jason Leigh), on his way to collect her bounty and see her hanged.

He’s joined by another bounty hunter, the disgraced former Union soldier Marquis Warren who carries around a personal letter from the desk of Abraham Lincoln (Samuel L. Jackson), and a racist former Confederate marauder (a scene-stealing Walton Goggins) on his way to be inducted as sheriff of Red Rock.

These three men more or less form the core of the film, as their relationships are firmly established during the wagon ride that opens the film and then taken in unexpected, fascinating directions as the film goes on. Russell and Jackson are both playing within their wheelhouses but doing so fantastically, while Walton Goggins of Django Unchained holds his own alongside them, turning what could have been a Southern stereotype into one of the film’s most surprisingly compelling characters.

Speaking of stereotypes, the wagon riders are soon waylaid by the blizzard at Minnie’s Haberdashery, where the operators are suspiciously absent. They meet a collection of stereotypes who round out the titular eight — a caricature of a Mexican (Demián Bichir, doing a spot-on impersonation of an old Western trope), a theatrical Englishman (Tim Roth, who uses his accent to turn every line into a laugh riot), a closed-mouthed “cowpuncher” (Michael Madsen), and an aged Confederate general (Bruce Dern).

The epic scope of the film becomes intimate within the confines of Minnie’s Haberdashery, even as the wide frame always allows for added depth and detail within each shot. Using the confines of a paranoid chamber drama, Tarantino simply lets his characters rub against each other for two hours or more, building tension with the implication that one, or at least one, of these men is working with Leigh’s Daisy Domergue to plot an escape.

Using this theater-friendly setup, Tarantino finds plenty of room for theatricality. Though he never reaches the riveting narrative tightness of his earlier chamber piece Reservoir Dogs, he uses extended dialogues scenes to draw out his tension to sometimes unbearable levels, but never fails to deliver when he plants one of Chekhov’s guns around Minnie’s Haberdashery. The film calls attention to itself and its own structure, incorporating narration from Tarantino himself, chapter markers and shifts in time and point of view to give the viewer just enough information to wonder about what’s going on and who’s collaborating with who.

The unique director behind Pulp Fiction has long used film references and snappy dialogue to make criminal protagonists seem cool, but the characters of The Hateful Eight, though quotable, are never held up as cool. Unlike Django Unchained, there’s no Django or Dr. Schultz to enact righteous justice or provide a moral compass, because nothing is so clear in this hazy blizzard. Long-time Tarantino collaborator Jackson plays the closest thing the film has to a protagonist, but he is still a sadistic liar, driven by vengeful bloodlust as much as anything else. There are no heroes here and no retribution that doesn’t promise to breed increased hostility and violence, which helps to explain the increasing brutality of its second half.

The talky film explodes just before its midpoint, and the stylized violence feels uglier and meaner than any Tarantino film that’s come before. That’s by design. Like most great Westerns, The Hateful Eight reflects the present time even as it depicts the past. Tarantino announces himself as a more political filmmaker than most give him credit for. Invoking the increased awareness of the nation’s violence epidemic, which earlier this year made him the target of a police union boycott, the perpetually-entertaining director tries to disturb with his latest, showing the violent consequences of our nation’s continued political and racial divides.

The nihilistic, subtly political vision sees evil in both sides of the law, as all of the characters revel in violence due to their own prejudices. Meanwhile, everything good and right in this world is either revealed to be a lie or murdered in cold blood.

Despite all the nihilism and moody hopelessness of the film, it’s still a Tarantino movie. Even with so much meanness, there’s plenty of fun to be had with the script’s scrappy one-liners or even in the well-earned demises of a few villainous characters. His story is simple and his shots well-composed, though both are subject to a few attention-getting gimmicks like a quickly-altered rack focus or a stretch of fourth wall-shattering narration.

At the end of it all, when unlikely alliances have been made and broken, the film offers only the slightest glimmer of possibly false hope amid all the gallows humor, suggesting that maybe, just maybe, the lies we tell ourselves about our supposedly great nation might one day become true.