Meghan Markle makes a statement with whatever she wears. When it comes to jewelry, even the simplest pieces that might seem understated can have the biggest message. From supporting ethical companies to honoring Princess Diana, Markle always sends an intentional message — no matter how subtle it may be. Here’s the hidden meaning behind many of Markle’s jewelry choices as a royal.

When Markle attended the Invictus Games in Sydney on her royal tour of Australia, she wore some chic stackable rings by Canadian jeweler Ecksand. The brand, which was founded in 2010, is all about creating sustainable jewelry. Not only do they use recycled gold for their pieces, but they’re sure to only use ethically sourced gems.

Erica Bianchini, Ecksand’s co-founder and designer, explained the message Markle is sending by wearing their jewelry. “Just seeing her wear our pieces really reiterates to us that she must already be aligned with our values,” she told People. “And the way she brought them all together is so fun, she always put things together so naturally.”

Later in the evening, Markle chose another piece from the line: the Emerald Secret Heart Stackable ring. “I was really happy to see she chose that because I love emeralds and also they mean everlasting love,” Bianchini pointed out. “But I don’t think the duchess needs any gems to reinforce that!”

She connects with her fans

Markle wears jewelry pieces that send clear messages in more ways than one. For starters, she wore a handmade pasta necklace gifted to her from a 6-year-old fan — and honestly, it doesn’t get any sweeter than that.

Plus, we’ve seen her re-wear some of her favorite pieces on numerous occasions, which is something many royals would never do. According to People, one of her go-to pieces is her 3 Diamond Amigos Curve Post earrings by the ethical Los Angeles designer, Adina Reyter. She’s also reached for her Solid Pave Teardrop necklace by the same brand multiple times, as well.

Reyter said of Markle, “Everything she has worn so far is very wearable, it’s not fussy and that’s her entire appeal. Customers want the personal message of the meaning behind the design and the brand — having someone like Meghan Markle wear our pieces really communicates who we are and we couldn’t be happier.” 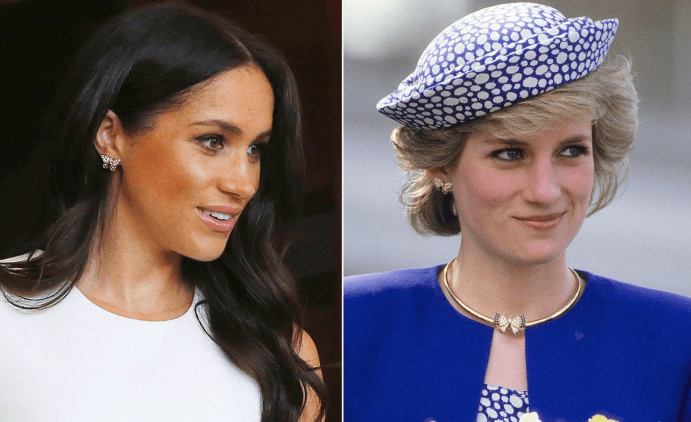 Although Markle never got the chance to meet her mother-in-law, Princess Diana, she often honors the late princess in any way she can. It all started with her engagement ring designed by Harry, which includes two diamonds from Diana’s collection.

That’s not the only ring of Markle’s that honors the Princess of Wales. Harry also gifted his new wife an aquamarine cocktail ring, which she wore to their wedding reception. The ring may have looked familiar to royal family fans, which made sense, considering it once belonged to Diana.

On her Australia tour, Markle once again took the opportunity to honor Diana with jewelry. She wore a pair of butterfly earrings which were iconically worn by Diana on a trip to Canada on May 3, 1986. What’s more, the Duchess of Sussex wore the earrings on her first royal outing since announcing her pregnancy, which seemed to imply she and Harry were thinking of Diana during this exciting time in their lives.