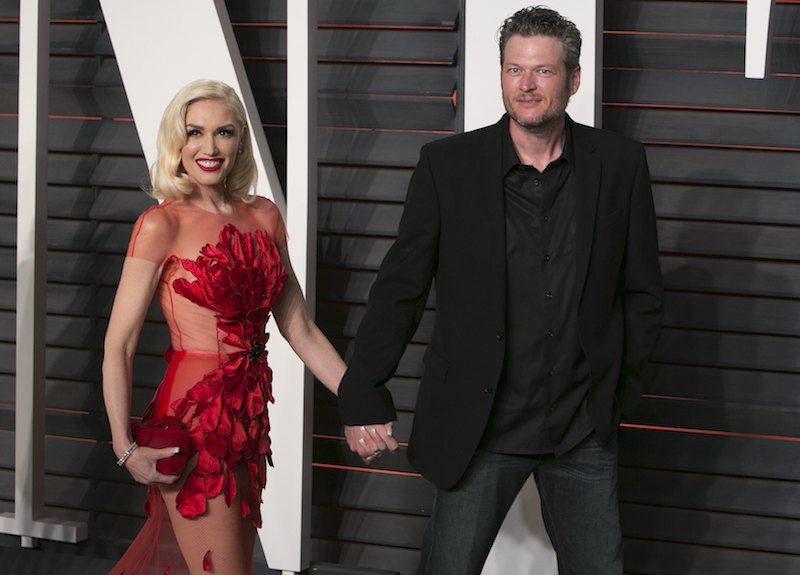 Blake Shelton and Gwen Stefani have been dating since 2015, shortly after their separation from their spouses. They continued working on their music and coaching on The Voice together since then. Their relationship has stayed in the spotlight, but they have been kind of vague about the plans for their future. But does Shelton’s new song confirm rumors about marriage?

The country singer’s new single, “I’ll Name The Dogs,” has been released, along with the music video. The lyrics are pretty romantic, envisioning a relationship where two people are getting ready to start the rest of their lives together. So is there a huge message about Stefani in the lyrics and music video?

Here are seven things to know about what the hit could signify about their relationship.

1. The music video may be confirming that they are planning to get married

In the music video, we see Shelton and his band performing at a wedding. We see the bride and groom getting ready for the big ceremony, along with their guests enjoying the reception. The lyrics of the song also picture the future of a couple together: “I’m talkin’ you and me with the same street name/Same last name, same everything/It’s a real thing, a how I feel thing/So I’mma go on and take a swing.”

There are reports that Shelton plans on proposing publicly to Stefani on The Voice. It’s possible that this new song could be not only a foreshadowing of that, but maybe even a part of the proposal.

2. The song suggests they want to have kids together

Their love for each other is unquestionable. | Kevin Winter/Getty Images

A big focus in the lyrics is the planning of having children. “You name the babies and I’ll name the dogs” is a repeated lyric in the chorus.

Stefani already has three children, Kingston, Apollo, and Zuma, with Gavin Rossdale. Shelton doesn’t have any kids yet.

3. They could be addressing the wedding rumors

Shelton has previously addressed all of the rumors about his relationship with Stefani in an interview. “Any time you see a story about us, it’s either that it’s a fake relationship or that we’re already married,” the country star said, according to Us Weekly.

He’s right that there have been many reports suggesting they are planning a wedding or that they’re already hitched. This song may be saying that they haven’t tied the knot yet, but he does plan on proposing.

4. Stefani’s kids are totally on board with them getting married

It’s no secret that Shelton has gotten close to his girlfriend’s kids. So it’s not surprising that they would be OK with their mother walking down the aisle.

You can actually spot Stefani’s three sons making a cameo, as three guests enjoying the wedding reception in the music video. This definitely shows that the song and music video have a personal meaning to the couple.

5. Stefani has previously said she would love a proposal on The Voice

In the outtakes of the show in Season 12, Alicia Keys is seen asking Stefani, “What about, like, a proposal on the show?” The pop star actually responded laughing, saying, “That would be my dream come true!”

Chances are it would also be the producers’ dreams come true. So although it hasn’t happened yet, it is a possibility.

6. There are reports that the couple is making baby plans

The couple is reportedly looking to start a family of their own. | Christopher Polk/Getty Images

The “name the babies” lyric might not just be a catchy part of the song. The No Doubt singer said “I really love the baby stuff,” according to Life & Style, also adding, “I miss it.”

A source also reportedly revealed the 47-year-old has been looking into options like adoption or surrogacy.

7. It suggests it’s never too late to get married

Will we be seeing a proposal soon? | Rick Diamond/Getty Images for Kicker Country Stampede

The two singers are older and have gone through divorces, but the music video seems to hint that it’s never too late to get married. This message reportedly hit home with the singer.

“Gwen cried the first time she saw the finished video,” a source told Hollywood Life. “The combination of the romantic lyrics that Blake sings just for her, seeing her boys on screen, and the surprise twist of it being an older couple getting married hit her right in the heart. It was so emotional for her in so many ways.”