By now, every Star Wars fan should be very aware of the big shock at the end of the official Star Wars: The Last Jedi trailer: Rey, the hero of the sequel trilogy, reaching out to the evil Kylo Ren for guidance. Madness! But courtesy of some teasers that Lucasfilm has released ahead of the film hitting theaters, we may just be able to debunk the theory that Rey teams up with Kylo Ren.

We broke down in fine detail a few key images from The Last Jedi promos that seem to destroy this major theory about Rey and Kylo Ren.

Fans waited patiently for the full trailer for The Last Jedi, and in mid-October, they were not disappointed. There were a ton of jaw-dropping moments from the trailer, including a brand-new look at Supreme Leader Snoke, more shots of Rey training with Luke on Ahch-To, and the tease that Kylo Ren will have to make a decision about whether to fire on his mother’s ship.

But the big moment was at the very end, between Rey and Kylo Ren. Rey looks forward, and with a slight uncertainty in her words, she says, “I need someone to show me my place in all of this.” The camera cuts to Kylo Ren facing her, reaching out his hand.

Boom! Rey is joining forces with Kylo Ren! She’s turning to the dark side! Or is she? 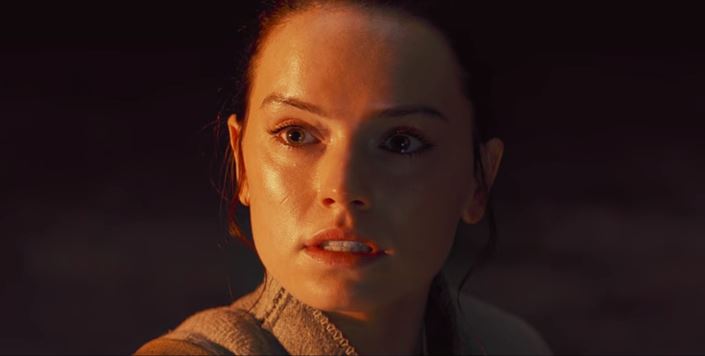 “I need someone to show me my place in all this.” | Lucasfilm

Director Rian Johnson has made it no secret that The Last Jedi would answer some of the questions left over from Star Wars: The Force Awakens, throwing some major twists at fans in the process. There is a major reason why the trailer was kept from the public until a mere two months before the movie’s release date, and why Disney has kept so many of the film’s secrets close to the vest. The direction that The Last Jedi takes the franchise could be make-or-break for Star Wars.

With that said, why would they spoil one of the bigger twists in the history of the franchise in a trailer? Rey joining forces with Kylo Ren or simply turning to the dark side isn’t something you tease in the trailer, it’s something you shock movie-goers with in the theater. There are a ton of reasons to be skeptical about that moment, but no way to disprove it.

With under a month before the release of the movie, there have been a handful of new, short teasers, images, and interviews that have been slowly streaming out. Generally, no major spoilers have been evident in the teasers; it’s mostly just new bits of dialogue to give greater perspective to scenes we’ve seen in previous trailers.

In a recent teaser titled “Kylo failed Luke,” we get a never before seen moment when Luke and Rey are gathered around a fire on Ahch-To. Looking toward Luke, Rey says, “Kylo failed you, I won’t.” It’s brief, but extremely important in the overall scheme.

It’s well-established from The Force Awakens that Kylo Ren is actually Ben Solo, the Force-sensitive nephew of Luke Skywalker. Ben’s mother, Leia, sent him away to train with Luke at the Jedi Academy, and at some point the boy turned on his master. The pull of Supreme Leader Snoke was too strong, and Kylo Ren burned down the academy. We’ve seen this moment briefly in Rey’s flashback from The Force Awakens, as well as in the trailer for The Last Jedi.

There are interesting parallels at play here. In Star Wars: The Empire Strikes Back, Yoda was initially reluctant to train Luke because he sensed the anger in the boy – much like his father, Anakin Skywalker. In The Last Jedi, it’s clear that Luke is scared to train Rey because of what happened with his nephew. The trailer, of course, makes it seem as though his worst fears are realized. 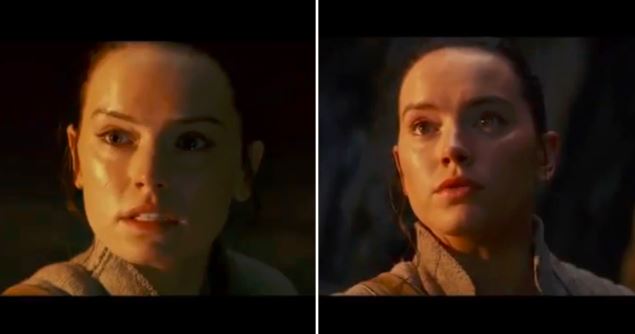 But here is where we discover the trickery of Disney and how it has used some convenient editing to influence our minds. Above, you’ll see screenshots from each scene, with the one on the left coming from the “I need someone … ” scene and the one on the right being the “Kylo failed you … ” scene.

It’s clear Rey is wearing the same clothes in each image with a fire illuminating the right side of her face. Her hair is pulled back as opposed to down, which we see later in the trailer when she’s in Snoke’s Throne Room. The clothes she’s wearing in both images are the same as the end of The Force Awakens when she arrives on Ahch-To, again clashing with what she’s wearing when she’s with Snoke. She even has the same strands of hair falling out on either side of her face.

This further leads us to the conclusion that both lines are delivered in the same scene, early in the movie while she’s still on the island. The conclusion? Rey never begs Kylo Ren to “show me my place in all of this.” That line is delivered to Luke, the reluctant Jedi Master. But that’s not the only interesting catch from the recent teasers.

Another short teaser that could raise the arm hair of any Star Wars fan is titled “Resist it, Rey.” Again, we’re getting more context to dialogue and scenes we saw in previous teasers and trailers. Luke asks Rey what she sees, and she states, “The light … the dark … there’s something else … it’s calling me.”

The tremble in her voice at the end will raise your eyebrows a bit, but Luke’s reaction will make your heart race. He pleads with her, “Resist it, Rey!” and then again yells, “Rey!”

What’s most interesting here is that it doesn’t appear to be the dark side of the Force that Luke is concerned with. The mentions of the light and the dark are passed over, without a problem. It’s that something else, the thing that calls to her. What is it?

The best assumption is that it’s Snoke calling to Rey, or at the very least whatever is the source of his power. From the trailer, Luke has said that he’s seen this raw strength before. “It didn’t scare me enough then … it does now.” Is The Last Jedi going to introduce another side of the Force outside of the light and the dark?

There are more than just the Jedi and the Sith in canon. The Gray Jedi, or the ones that walk the line between the light and the dark, also exist. There is the Bendu from Star Wars Rebels, which presents itself as a Force entity that exists outside of the light and the dark. Then there are the Guardians of the Whills, who are not Jedi.

The stage has been set for the Star Wars universe to expand our knowledge of the Force beyond just the light and the dark, the Jedi and the Sith. Considering that Disney plans to make Star Wars movies for the rest of time, it’s a smart play to make the galaxy a little bit bigger in that sense. But what, exactly, all of that means will remain a mystery until Dec. 15.