‘The McConaissance’ Gets Lost In ‘The Sea of Trees’ 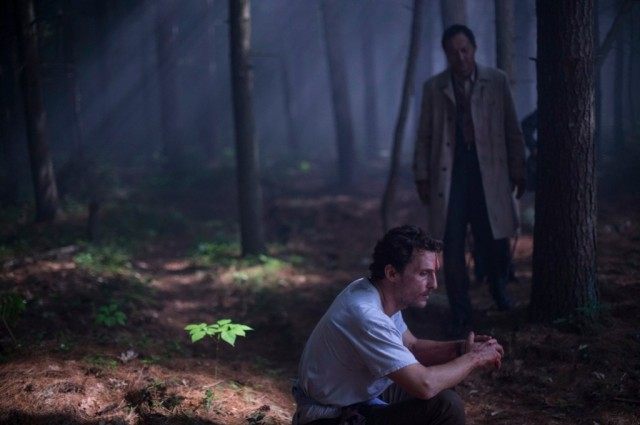 Last year, Matthew McConaughey and the media-created word to describe his career rejuvenation — “McConaissance” — were both nearly inescapable. The former ditzy male lead in romantic comedies known as much for his washboard abs and hippie stoner off-screen antics as his acting completely turned his career around by taking on projects like Mud, Dallas Buyers Club, The Wolf of Wall Street, and True Detective. He won an Oscar for playing a homophobic cowboy AIDS patient in Dallas Buyers Club and led the cast of one of the most talked about TV shows of the year alongside his friend Woody Harrelson in True Detective. No one could stop talking about how blown away they were by McConaughey’s transformation.

McConaughey spoke frequently about the calculated decision he made to change his career from his typical rom-com fare to more serious material that would challenge him, and he seemed to do it so quickly that it astounded the industry and fans. Now he continues to work with the best directors in the business on anticipated dramatic projects as people are eager to see what he will do next.

Unfortunately, it seems like with his latest film The Sea of Trees, McConaughey has made his first major misstep in this new portion of his career. The Gus Van Sant film debuted at Cannes recently, where it was met with boos from the crowd. The director is a Cannes favorite, having won the Palm d’Or in 2003 for Elephant, but his highly experimental movies can sometimes end up missing the target. The suicide drama set in Japan was booed by the Cannes audience and now pretty nasty reviews of the movie are coming out of the festival.

“One way to pass the time during The Sea of Trees — preferably during one of Matthew McConaughey’s interminable misty-eyed monologues — is to try and figure out exactly how many bad movies the actor, screenwriter Chris Sparling and director Gus Van Sant have managed to squeeze into their tale of a man’s lonely quest to take his own life,” said Variety. The Guardian called the movie, “a fantastically annoying and dishonest tearjerker.”

It almost seems as though McConaughey was begging on his hands and knees for seriousness and credibility with taking on the role of a suicidal academic mathematician who wears glasses and was hated by his ex-wife (Naomi Watts) for never making enough money among other grievances. Instead of just doing it at home, he goes to Japan’s infamous Suicide Forest to swallow a bottle of pills. His plan is deterred by a suicidal Japanese man (Ken Watanabe) who has been wounded and needs help.

This is the second McConaughey film in a row that hasn’t quite lived up to hype. While Christopher Nolan’s Interstellar got nowhere near as bad reviews as The Sea of Trees is getting, the film also was thought to be a bit over the top and not as good as either Nolan or McConaughey’s recent work. The movie has a lukewarm 72% rating on Rotten Tomatoes, with most critics saying that Nolan tried to do too much in the film, reaching for more than he could grasp.

Those writing the bad reviews of The Sea of Trees don’t think this means McConaughey is losing his edge, or that those spectacular performances from last year were by any means flukes. “As for McConaughey, his recent mid-career high will continue in spite, rather than because, of misguided bids for seriousness like this one,” Variety said. Working with Van Sant is always a bit of risk, and it’s one that many actors are very willing to take.

McConaughey responded to the boos at a press conference in his typically chill way by saying, per TheWrap, “I would say, real simply, anyone has as much right to boo as they do to ovate.”

Up next from the actor is the adventure drama Gold about a pair of explorers who go into the Indonesian jungle searching for it co-starring Michelle Williams and Edgar Ramirez. He’s also filming the Civil War movie The Free State of Jones, in which he’ll play a poor Mississippi farmer who leads a group of southerners to rebel against the Confederacy. Hopefully those will turn out a better than this dud.