Stephen King’s It has long been considered a horror masterpiece and one of the authors’ most frightening and satisfying novels. The 1990 TV miniseries, based on his book, has long been a fan-favorite, thanks to Tim Curry’s unforgettable performance as Pennywise the Dancing Clown.

So expectations for Andy Muschietti’s R-rated adaptation of It have been, understandably, high. And, fortunately, the film has managed to not only live up to, but exceed, the hype that preceded it. It has already broken box office records and could easily join the pantheon of the most beloved King adaptations.

It delivers countless jump-out-of-your-seat scares, thanks to Bill Skarsgard’s frenetic and frightening performance as Pennywise. But the kids at the heart of the story, the Losers’ Club, are what really make the film worthwhile. Because King fans will always tell you that It isn’t just about a monster — it’s about the unbreakable bonds you form with your friends when you’re growing up.

The new It offered much of what the ‘90s miniseries lacked in terms of King’s trademark blood and gore. But there are some big differences between how the story played out on the page and on the screen.

1. The time period It’s set in

The new film might remind you of the popular Netflix series Stranger Things. | New Line Cinema

The newest adaptation of It has a distinct Stranger Things vibe. That wasn’t intentional — the film was already in production when Netflix’s sci-fi hit started streaming last summer.

The two spooky stories do have plenty in common, including standout star Finn Wolfhard. And one of the most obvious similarities is that both are set in the 1980s. The fact that the 2017 adaptation of It is set in 1989, though, marks a significant change from Stephen King’s novel. In King’s It, the children that make up the Loser’s Club live in Derry and confront Pennywise in the late 1950s.

The change in time period doesn’t detract from the spookiness of It at all. In fact, it made the story feel a bit more approachable to a 21st century audience.

2. How the monster reveals itself to the Losers

One of the scariest things about It is that the monster in question can shapeshift into anything. It feeds off children’s fears. And while it sometimes appears as Pennywise, it can also offer up many different terrifying faces.

Some of the most iconic moments in King’s It occur when each member of the Losers’ Club meets the titular villain for the first time. From an oversized bird to a ravenous werewolf, he embodies their biggest phobias — and almost devours them whole when they’re on their own.

Muschietti’s version of It most often appears as the horrific clown, and that’s to great effect. But It also manifests in other ways — just not always ways that fans of the book might recognize. Sure, a couple of It’s most unforgettable incarnations from the book made an appearance. Bill Denbrough sees It as his dead brother, Georgie; Beverly Marsh definitely encounters a sink full of blood; and Eddie Kaspbrack has a few run-ins with a grotesque leper.

But many of the kids’ introduction to It were revised for the 2017 adaptation, to varying degrees of success. The twisted monster that stalks Stan Uris was certainly spooky. And Richie Tozier’s room-full-of-clowns experience was a coulrophobics’ worst nightmare. But die-hard fans of the book may have felt cheated by Mike Hanlon’s fiery encounter with Pennywise, as well as the absence of some other big scares.

In King’s novel, the core group of friends spend most of their summer kicking around the Barrens. For non-Constant Readers, that’s a wooded area rarely visited by adults — one which offers a direct pipeline into It’s lair, by way of some sewer pumps.

In Muschietti’s adaptation, the kids do visit the Barrens a few times. But it feels less like a sanctuary for them, or a home away from home, and more like just another place they hang out.

The 2017 version of It does offer up one especially unforgettable landmark, though. The abandoned house on Neibolt Street, which was absent in the 1990 miniseries, serves as Pennywise’s macabre fun house. And the house, rather than the Barrens, plays an essential role in driving the kids toward his terrifying home. 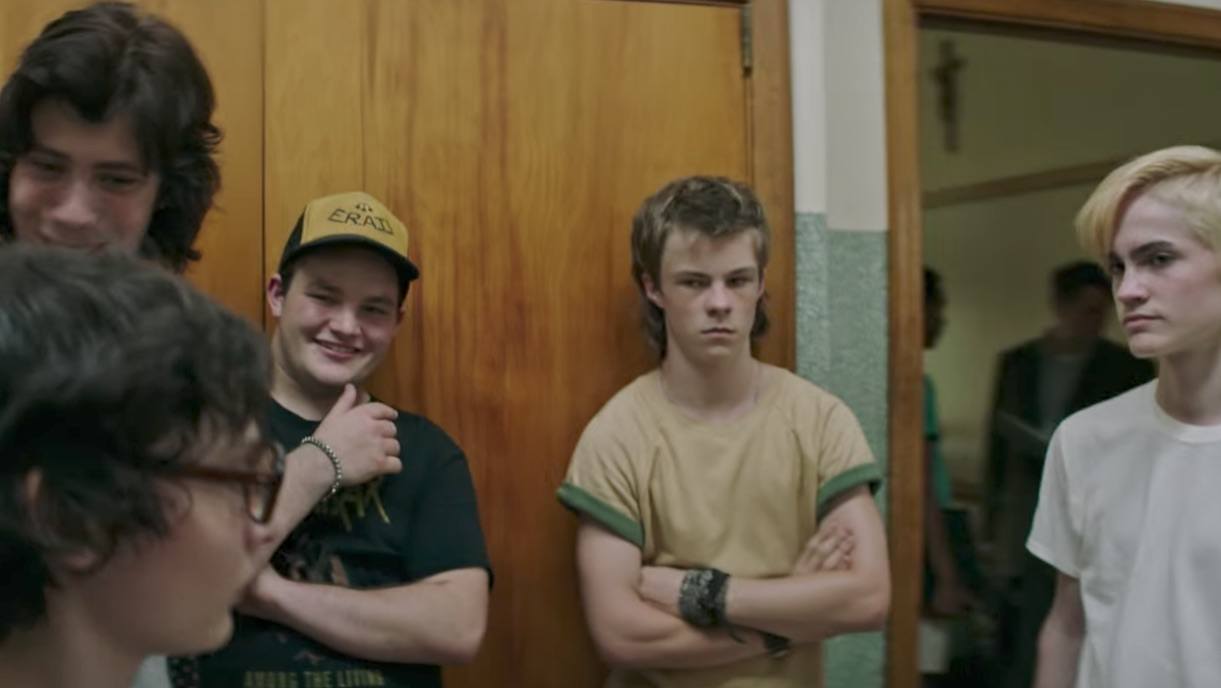 In both King’s original novel and Muschietti’s adaptation, Henry Bowers and his friends do almost as much damage to the Losers’ Club as the titular monster. But their role in the most recent adaptation is significantly pared down. Bowers is a bad kid — he’s not above causing lasting physical harm to the kids he bullies. And once It gets under his skin, he becomes homicidal.

In King’s novel, Bowers and his friends Belch, Victor, and the sociopathic Patrick, feel like an omnipresent threat. But in Muschietti’s version of events, the Bowers Gang only appears sporadically. And they don’t get anywhere close to the comeuppance they receive in the novel.

Critics and fans agree: The best part of It is the authentic, touching, and surprisingly hilarious interactions between the Losers’ Club. Whether they’re ribbing each other and telling dirty jokes, splashing away in the dog days of summer, or fighting off bullies and monsters, they feel like a genuine group of friends.

That dynamic is also what made fans of King’s novel fall in love with It. But while Muschietti perfectly captured the feel of their friendship, he did make some significant changes to the roles they play. In King’s novel, Mike is the academic of the group and lets all the other kids know about Derry’s dark past. In 2017’s It, new kid on the block Ben Hanscomb is the one with a hankering for history.

And in King’s novel, the group never really parts ways at any point during their horrific summer. They stay close from the get-go, even though a few of the Losers are hesitant about their monster-hunting mission.

In Muschetti’s It, they do split up after a particularly horrific outing. And it’s not until one goes missing that they regroup to fight It together. Group leader Bill Denbrough and wannabe comedian Richie Tozier, who are particularly close in King’s novel, even come to blows when the tension is high.

The falling out does help keep the story moving as the film heads into its final act. But it’s something that fans of the book might be reticent to accept, since King’s Losers are always closer than blood.

6. The confrontation in the sewers

In It, the Loser’s Club finally decide they’re tired of being terrorized by a clown. As summer draws to a close, they journey into the sewers and bring the fight to It. The ensuing fight forces them all to confront their fears. And while they have several close calls, they emerge victorious and fight back It for good — or so they think.

That’s basically how it goes in both King’s novel and Muschetti’s adaptation. But there were some major differences in how it played out. In King’s story, the Losers go through the Ritual of Chud — basically, a mental game of wits with It, involving an immortal turtle. And the Losers, led by Bill, don’t get to see inside It’s lair.

In the 2017 version of It, the group goes into the sewers after they learn that It has captured Bev. And they go straight into the heart of It’s hiding spot, where they see their dead classmates floating in the air. Their fight with him is purely physical.

The changes Muschetti made, for the most part, make sense. Fans have long wondered how any filmmaker could translate King’s version to the screen. But there was, perhaps, something lacking in the set-up for his version of the confrontation — namely that Bev, one of the most fearless characters in It, was made out to be a bit of a damsel in distress.

Muschietti did keep one of It’s most disturbing and intriguing premises, though: that the monster is fueled by something called Deadlights, which Bev horrifically experiences firsthand.

7. There are no alternating timelines

Perhaps the biggest change from the novel to the film adaptation of It is the presence of an alternating narrative. In King’s book, he tells the story of Bill and his friends by switching between their lives as children and adults. After the Losers’ Club grows up, they forget about the events of their childhood. But 27 years later, It returns and they start to remember and decide to return to their hometown.

The 1990 miniseries more or less followed this structure. But Muschietti’s adaptation didn’t feature the Losers’ Club as adults at all — at least, not yet. In the film’s closing moments, we see the seven friends make a blood oath and swear they will continue their fight if the monster rears Its ugly head again. And the closing title of the film revealed that this is, in fact, only Chapter One of the story.

Screenwriter Cary Fukunaga’s decision to split the story entirely was a bold narrative decision — and it completely paid off. Muschietti’s It made it easier to become truly invested in the characters’ survival in the moment, without the distraction of seeing what they will someday face as adults.

Given It’s success at the box office, it’s basically a sure thing that we’ll get to see Chapter Two. So we’ll also get a chance to see how the Losers’ Club reacts to It — and to seeing each other — when they’re all grown up.