Fans have waited over a year for the return of Netflix’s breakout hit series, Stranger Things. And on Oct. 27, the Duffer Brothers’ second installment will hit the streaming platform at last. Anyone that wants to know what’s up with Eleven, Mike, Will, Joyce, and the Upside Down will surely be binging on the next nine episodes. And when it’s all said and done, we’ll finally have the answers to our lingering Season 1 questions.

But there is also a new, frightening monster lurking in the shadows in Stranger Things 2. Thus far, the Stranger Things creative team has kept a lid on many of the second season’s most exciting details. But anyone who’s seen the Stranger Things 2 trailer, or kept up with the series’ cryptic social media teasers, knows that we can expect more horror, more mystery, and possibly more death (R.I.P. Barb).

Here are the characters most likely to die in Stranger Things 2 and beyond, and the potentially surprising reasons they might be on the chopping block. 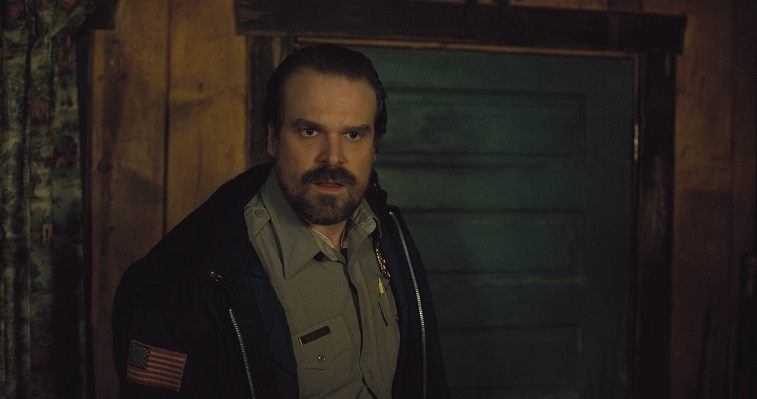 Sheriff Jim Hopper (David Harbour) certainly made a big impression in the first season of Stranger Things. Whether he was guzzling beer before his shift, punching adversaries when he got into a tight spot, or breaking the bumbling small-town sheriff stereotype, he quickly became a fan favorite.

Based on his presence in the trailer, it’s clear that he’ll play a critical role in the new Hawkins’ mystery. And Harbour has hinted that we’ll learn more about how Hopp’s daughter died (many fans believe she didn’t die at all, and that she might even be Eleven).

But with all the commotion that’s sure to come in Stranger Things 2, Hopper could wind up in grave danger. We’ve seen images of him in full Upside Down garb, which indicates he may go back into the belly of the beast. And now that Harbour is busy with his new role as the titular antihero in Hellboy, he may have to hang up his sheriff’s badge for good.

Will Byers in Stranger Things 2 | Netflix

We didn’t get to see all that much of Will Byers (Noah Schnapp) in the first installment of Stranger Things. That’s because he was stuck in the Upside Down, communicating primarily through radios and Christmas lights.

Now that he’s been safely returned to his family, he’ll play a bigger role in Stranger Things 2. But he’ll also, once again, face mortal peril. The last moments of Season 1, and early details about the new season, indicate that Will may have brought part of the Demogorgon’s lair back with him. And it appears as though the creepy crawlies he thought he conquered won’t give him up without a fight. In fact, Finn Wolfhard — who plays Mike Wheeler — hinted to TVLine that “something happens to Will in the first couple of episodes that’s very, very disturbing.”

It would seem especially cruel for Will to survive, only to die in Stranger Things 2. But it is a series that delights in keeping viewers on their toes. And if the Duffer Brothers want to go for shock value, killing Will would be the ultimate jaw-dropper.

Will’s older brother Jonathan (Charlie Heaton) had an interesting character arc in Stranger Things’ first season. He started off as a sort-of creepy loner and wound up as a monster-defeating hero. Still creepy, sure, but at least he wasn’t all on his own. He teamed up with, and started crushing on, Nancy Wheeler (Natalia Dyer) so they could try to find Will and Barb (Shannon Purser).

In Stranger Things 2, it looks like the pair will team up again and take their monster hunting on the road. And they might rekindle their obvious attraction to one another, turning their flirtations last year into a full-fledged love triangle with Steve Harrington (Joe Keery). But it appears as though they’ll come face-to-face with the series’ new creature (you know, the one that makes the Demogorgon look downright cuddly). He’ll also have to contend with Will’s new crisis — and we know Jonathan will stop at nothing to protect his little brother.

It would be a strange twist of fate, indeed, if Jonathan ended up biting the dust while defending either Nancy or Will. But it could be in the cards. After all, like Harbour, Heaton’s career has taken off, and he’s joined The New Mutants. If he needs more time to work on X-Men projects, then he — and we — may have to bid farewell to Jonathan for good.

Throughout most of the first season of Stranger Things, Steve Harrington was more of a love-to-hate than a loveable character. As Nancy’s cocky boyfriend, he came off like a typical rich high school jock. But by the end of Season 1, he redeemed himself by joining forces with Jonathan and Nancy to take on the Demogorgon.

Steve’s going to play a much bigger role in Stranger Things 2 — Keery is a series regular this time around. But from the looks of the most recent trailer, he’ll be spending more time with Dustin (Gaten Matarazzo), Lucas (Caleb McLaughlin), and his full-of-nails baseball bat.

One person he doesn’t seem to be hanging around much, though, is Nancy. And in terms of the larger storyline, if his romance with Nancy is on the outs, that could mean he’s a bit more expendable.

The boys will obviously be at the center of the action in Stranger Things 2. And if Steve comes along for the ride, he may wind up being the one in the most danger. If Steve dies, it will be shocking, yes, and sad, definitely. But it would allow for some collateral damage without a huge change to the series’ overall chemistry. And would be a real full-circle moment if Steve, who started as one of the more selfish characters, wound up sacrificing himself to protect the kids.

Compared to other Stranger Things characters, Mr. Clarke (Randy Havens) wasn’t around all that much in Season 1. But he made the most of his time and endeared himself to fans thanks to his nerdy knowledge of alternate dimensions and willingness to keep the curiosity door open.

But while Mr. Clarke is a delightful character in a decidedly not delightful world, he’s also the perfect character to kill off, if, in fact, that’s what Stranger Things 2 will be doing. He’s even more expendable than Steve, but fans are invested enough in him to care. Plus, we know that the members of the Hawkins Junior High AV Club — Mike, Dustin, Lucas and Will — would avenge his death.

If the kids from Stranger Things were the heart of Season 1, then Joyce Byers (Winona Ryder) was definitely its soul. She relentlessly worked to convince Hopper that her son was alive. And she fought through a hellish realm to find Will and bring him back.

Joyce’s story is one of the most emotional and compelling parts of Stranger Things. But Stranger Things 2 runs the risk of making her story feel redundant. It’s hard to imagine the series without Ryder’s incredible performance. But that still doesn’t mean it’s out of the question.

From the moment we first saw Stranger Things’ Eleven (Millie Bobby Brown), standing soaking wet in the woods, she was unforgettable. With her shaved head, telekinetic powers, and love of Eggo waffles, she was the standout character in Season 1.

We’re still not sure how Eleven will fit into Stranger Things 2. But we do know she’ll return from the Upside Down with a vengeance (and slightly more hair). But how long will Eleven stick around? She, like Joyce, runs the risk of becoming a character that lives the same trauma again and again. And if the series is going to evolve, it will have to shake its narrative up.

Plus, bringing Eleven to life is no small feat. Brown earned numerous accolades for her performance — but it also took its toll. In March, the 13-year-old actress had to cancel some promotional duties due to exhaustion. And her career will likely continue to heat up after Stranger Things 2 hits Netflix. If Brown needs a break — and no one could blame her if she does — then Eleven could be in real danger of disappearing for good.