‘The Venture Bros.’: One of the Best Written Shows on TV

It takes a lot of talent to make something as deliriously silly as Adult Swim’s ultra-violent Johnny Quest parody The Venture Bros. into something that is often genuinely touching. Luckily, there’s a lot of talent and time put into making The Venture Bros., a series that has slowly evolved from a thin parody of Saturday morning cartoons into perhaps the best written series on television.

It’s certainly the most dense. Obscure pop culture references, episode callbacks, and character-based jokes whiz by like bullets in any given episode, far too fast for anyone to catch everything in one viewing. The density of the joke-writing is outmatched by the complexity of the series’ continuity, which routinely turns one-off throwaway characters into important players a season or two down the line. What other series would turn a modern day wannabe pirate or a slightly sociopathic parody of Mr. Fantastic of the Fantastic Four into fully-fledged characters who mature between episodes in unexpected, hilarious, and often vaguely tragic ways. Before the long-awaited season premiere last Sunday, the last episode was the hour-long special “All This and Gargantua 2,” which serves as an impressive showcase for the series’ enormous roster of characters and the creators’ ability to juggle them all somehow.

Of course, the series wasn’t always like this. When the show first premiered in 2003, it was comparatively simple, a straightforward if brutal parody show whose characters were barely one-dimensional — from the self-involved failed super scientist Rusty Venture living in his father’s shadow to the bloodthirsty beefcake bodyguard and airheaded sons he dragged around with him. 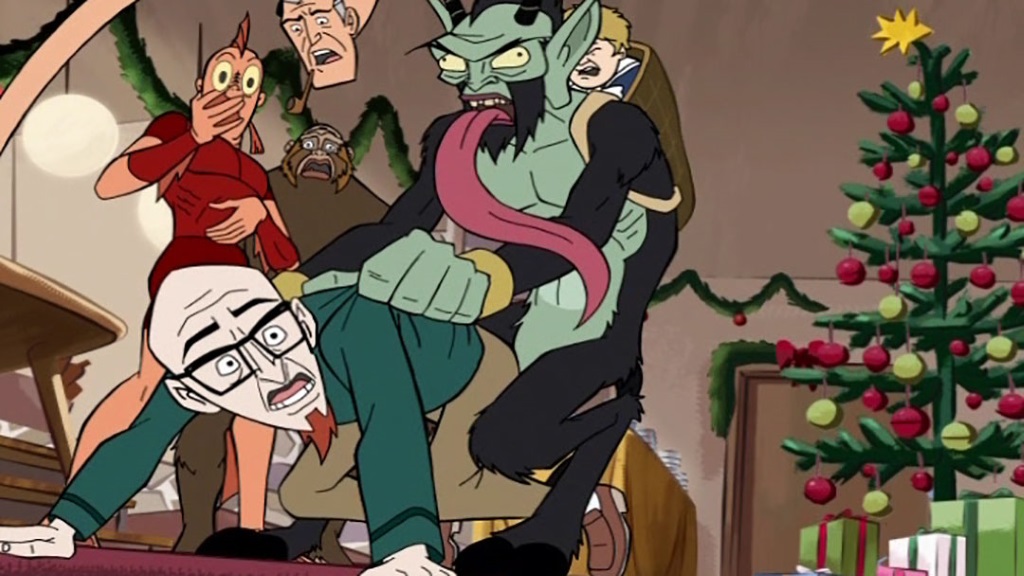 In five short seasons, the series has deepened that core cast, often by fearlessly upsetting their status quo with each new season, while building out the supporting cast to include hundreds of heroes and villains — though actual morality is rarely so cut and dry in the Venture-verse. Creators Jackson Publick and Doc Hammer have expanded beyond Johnny Quest to include their own fractured takes on most nerd culture mainstays. Scooby Doo becomes the dog from the Son of Sam murders in one episode. Batman’s creepy tendency of recruiting young proteges is satirized disturbingly and hilariously in another. The most recent season premiere, which moved the family to New York and yet again uprooted the status quo, incorporates a Spider-Man parody as well as an Avengers-esque team of urban protectors who only work on a private basis, negotiating protection contracts in between fighting villains.

Beyond the darkly comic parodies of comic book stock characters, the key to the Venture brand of tragicomedy has always been a blend of outlandish comic book antics and real-life mundanity. Take Doc “Rusty” Venture, the closest thing the series has to a main character. Having spent his entire childhood going on dangerous globetrotting adventures with his father, what seems exciting to his naive teenage boys is obscenely uninteresting to Rusty. It’s funny to see him react to such life-threatening situations with an attitude of self-involved apathy, but it’s also occasionally sad and even relate-able. Meanwhile, his arch-nemesis, the monologuing Might Monarch, wants nothing more than to torment his sworn rival, but is frequently stymied by the bureaucracy of The Guild of Calamitous Intent, a regulatory agency focused on “organized villainy.” Despite all the comic book insanity surrounding them, the characters in the world of The Venture Bros. are all sad, pop culture-obsessed nerds trying to do the best they can and occasionally connect with one another.

The dark parodies and the long-running characters are all made to face the physical and psychological consequences of the pulpy action world they inhabit. When bodyguard Brock Sampson cuts one of the Monarch’s hapless henchmen, they bleed. When one of the Venture brothers is dumped by his longtime crush, he feels, and he changes.

The show has never really been about the titular Venture brothers — Hank, the overconfident fanboy, and Dean, the sensitive nerd — themselves, but their character development speaks to the show’s evolution. They’ve gone from one-dimensional idiots who misunderstand everything around them to young adults struggling to fit into the world around them as best they can, given their unconventional upbringings. While Hank fully embraces the adventuresome danger of his family’s world, Dean has gone through something of a goth phase as he continues to struggle to find himself — a familiar trope that nonetheless feels painfully genuine because of how the series allowed him to grow so naturally.

But almost every major character has gone through their own rewarding development process. It’s difficult to name a way in which The Venture Bros. hasn’t drastically improved from its first season, which was nowhere near bad either. The animation looks at least thrice as sharp, with a vibrant sense of color and style most ’70s Saturday morning cartoons could never manage. Composer JG Thirlwell’s soundtrack has remained consistently amazing throughout. The pace of the jokes have gone from leisurely to so rapid-fire it seems almost inhuman. How has the series come so far?

The Venture Bros. is the sort of show that could only exist in the modern landscape of television. Its quality can be explained by the total control of its creators over the content of the show, as well as by the notoriously long hiatuses that allow them to fine tune every densely-packed minute of screen time before the episodes air. Five seasons in the span of 13 years isn’t much, but it feels like plenty when each episode leaves so much to be discovered with each rewatch. It isn’t an easy show to parse at first, but it’s one of the most rewarding for devotees, especially as the seasons only seem to improve with time. There are so many moving parts in the Ventureverse creators Jackson Publick and Doc Hammer built from nothing, and The Venture Bros. still feels greater than the sum of its 100-plus parts.