‘The Voice’ Season 12: Everything We Know So Far

Season 11 of The Voice was great, but it’s not too early to start looking ahead to the next season. There have been many rumors that not everything is perfect on set. Many reports have claimed that Miley Cyrus was thinking about quitting last season. So who exactly will be coming back in the future seasons and how will it affect the show? Here is everything we know about Season 12 so far.

Adam, Blake, Gwen, and Alicia will be our coaches

It looks like we will get the lovebirds back again on the show! It was announced on the Today show that Gwen Stefani will be coming back for a third time, and Alicia Keys will return for Season 12. So everyone will be a familiar face next time around.

“We can’t wait to experience the unique chemistry and energy Gwen, Alicia, Blake, and Adam will bring to Season 12,” President of NBC Entertainment wrote in a statement. So how exactly will this affect the show?

Gwen and Blake are still very much together and might even be wedding planning! “They want to get married before the end of the year,” a source told US Weekly earlier this year. “Gwen has said they both want something more low-key than their first weddings. It would likely be at Blake’s ranch [in Oklahoma] or in the backyard. Gwen doesn’t really care, she is just in love with Blake and their life together.”

Last time they worked together on the show they performed a great duet together, and their natural chemistry shined through. Chances are the Gwen coming back will be a nice change that fans will like. This time we will get to see how Gwen and Alicia interact together.

Alicia Keys has been a great addition to the show. She has won 15 Grammys, so she is definitely someone the contestants can aspire to be. She is also a musician and plays the piano. There have been many contestants on the show who have been able to play instruments, but not all of the judges have been able to share this passion or expertise. Alicia can show contestants how to perform with their instruments without having it hinder their performance.

She also brought a different vibe to the show. She has been making a lot of headlines lately for not wearing makeup. Her down-to-earth vibe also spills into the life advice she gives to the contestants. She has opened up about how this experience has be great for her. 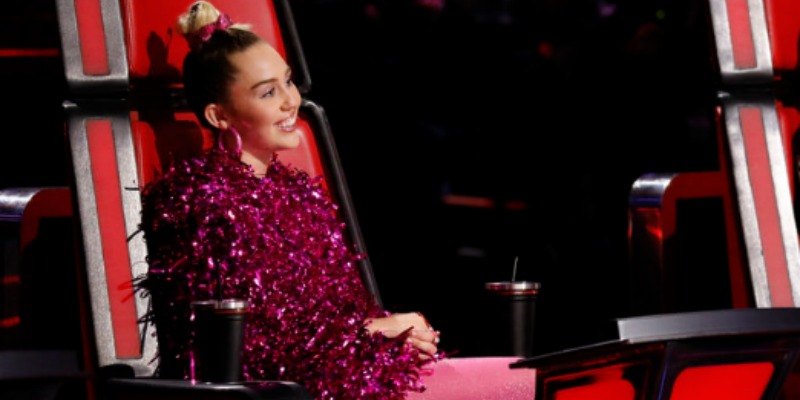 Miley Cyrus on The Voice NBC

“I find that to be really on-purpose, a gift given to me,” she told the Sunday Telegraph. “It feels very intentional of the universe to say this is an important part of what you need to do here.” Not only does she feel like it’s her calling to coach, but she knows she brings something different to the table by being who she is. “It’s more about them being able to witness what a woman like me is like, looks likes and the diversity, individuality, and strength of women — what it means to respect that and come to revere it and honour it.”

This season has been so interesting because we have two new coaches who happen to be women. Alicia and Miley have proven to have great chemistry together. Although they have their own teams and are competing against each other, you often feel like they are supportive of each other.

“The more I am getting to know [Miley], the more I am endeared to her … and appreciate who she is, what she says, her boldness and ability to be 100% who she is,” Alicia continued. But where does the news of Gwen’s return leave Miley?

Miley Cyrus will return for Season 13

We previously wrote about how the pop star was having a hard time getting along with Blake and Adam on the show. But if the rumors are true, then they aren’t keeping her away from the show! It has also been announced that she will definitely be back for Season 13.

“With Miley returning for Season 13, we’re truly ecstatic about the unmatched musical know-how and talent coming together in our coming seasons,” said the president of NBC Entertainment in a statement.

This doesn’t necessarily mean that the drama behind-the-scenes still isn’t reportedly happening. According to Enstarz, she is still butting heads with Adam this season. An insider said the two “were non-stop bickering during their last taping together” and “Adam seems to find Miley to be extremely loud-mouthed and absolutely annoying!”

The clash could be due to differences in personality. Many of the rumors have said that Miley may be taking over by talking a lot during filming. But it also could be due to Miley being younger and a huge name, leading to the stars’ egos coming in competition with each other.

Chances are that Miley being brought onto the show was in order bring in younger viewers. This wasn’t exactly welcomed by the rest of the show’s fan base. The announcement on Twitter led to many tweets complaining about the show’s choice of Miley as a coach. However, their plan worked!

According to Reality Blurred, the show is still the number one reality show for the 18 to 49 age range. It has a 4.2 rating in adults 18 to 49 and a total of 14.7 million viewers. Miley and Alicia have led to this age range growing by 21% compared to last season. So it makes sense why the show would want to keep them on for another season.

Miley has been doing a decent job at building up her team. But once again, it looks like Blake and Adam have the strongest teams so far by winning more of the contestants who got four chairs to turn around for them in their blind audition. However, there are reports that Miley is still dedicated to her role on the show and “refuses to be beat by the old men” according to an insider.