‘The Walking Dead’: The Best Zombies (So Far)

A crowd of walkers on The Walking Dead | AMC

These days, The Walking Dead feels a lot more like a show about incredibly dysfunctional and violent people than it does about a zombie apocalypse. But even in its most gruesome moments — like when a walker rambled over to feast on the remains of Glenn’s face in the seventh season premiere — there are always hints that ultimately, the undead are the enemy. Since its opening moments, AMC‘s horror series has centered its drama around its ravenous, not-quite-dead-yet foes and the dangers they pose to the living. In seven seasons, we’ve seen thousands of zombies wander across our screens. They’ve been gory and gross, and sometimes very sad.

But despite their tendency to run, er, walk, in crowds, a few have managed to stand out from the hordes. Sometimes they’re significant because of how downright disturbing they are. Other times, we remember them because of the important role they played in moving the series forward. Here are the 10 best Walking Dead zombies we’ve seen so far. 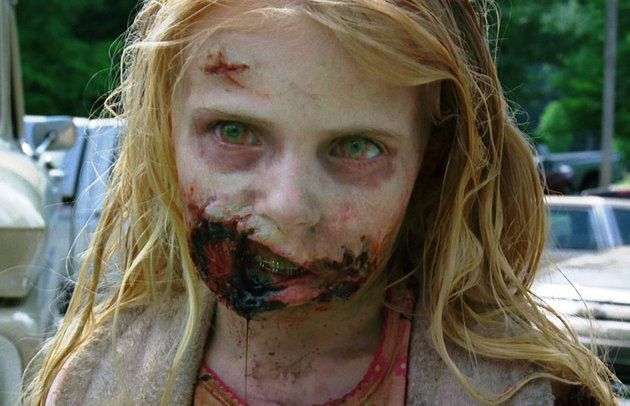 The Walking Dead let us know it wasn’t messing around right from the get-go when it had its hero, Rick Grimes, face off against an undead pre-teen in the opening minutes of the series. Sure, because she was the first one, the little girl zombie wasn’t exactly perfect — we know now that the undead don’t take time to pick up their favorite stuffed animal before they feast, for example. But her maimed mouth and hungry snarl more than made up for the series’ novice take on zombies’ habits.

Being first doesn’t necessarily mean being the best, but there was something completely unforgettable about seeing an unkempt child in bunny slippers on the hunt for blood.

The Walking Dead‘s Hannah as a walker | AMC

To many Walking Dead fans, the particularly gruesome corpse that Rick encountered in the pilot episode, “Days Gone By,” remained nameless. But thanks to the series’ short-lived spinoff webisodes, we know that she had a name — Hannah — and, like just about everyone else, a life before everything went to hell.

Even without the extended backstory (and a torso), this undead woman was definitely one for the memory books. When Rick found her dragging herself across a lawn in his hometown, he was still getting used to the whole zombie apocalypse thing. The fact that he returned to find her and put her out of her misery told us a lot about who he was as a character.

Hannah represented a kind of agony that we rarely see in walkers anymore — dare we say it? — a bit of humanity. Plus, she gave us a clue as to just how far away TWD‘s walkers can get from something that resembles life and still keep moving.

The Walking Dead‘s walker in the well | AMC

We don’t often think about the logistics of a zombie apocalypse. Like, how do you maintain a fresh source of water? What happens if that source is suddenly contaminated by a bloated zombie? In The Walking Dead‘s Season 2 episode “Cherokee Rose,” Glenn, Maggie, Dale, and the rest of the crew had to tackle that very issue when they found a walker in the farm’s well.

He was gross enough all on his own, with his lumpy flesh, swollen eyes, and claw-like hands. But, of course, the story ended with the team failing to account for the pliability of undead flesh in their “get the gross dude out of the well” plan. When the walker split in two as they were pulling it out of the well shaft and its bottom half slid back into the water below, TWD fans uttered a collective “Ew!” and the well walker cemented its status as one of the grossest zombies the show has ever seen.

We’ve only seen a handful of The Walking Dead characters we love (or love to hate) become walkers themselves. Shane wasn’t the first — that honor belongs to the dearly departed Sophia. But his death and subsequent reanimation in “Better Angels” certainly shook fans to their core, because it confirmed a long-held theory: that everyone turns, even if they aren’t bit.

For fans that were firmly on Team Rick in Season 2, seeing Shane die felt like justice long overdue. That Shane came back from the dead so soon after his violent and tragic confrontation with Rick made his vacant-eyed ambling toward his former adversary all the more chilling. And given how important Shane was to the first two seasons of the series, it was fitting that his death and zombification carried so much weight. 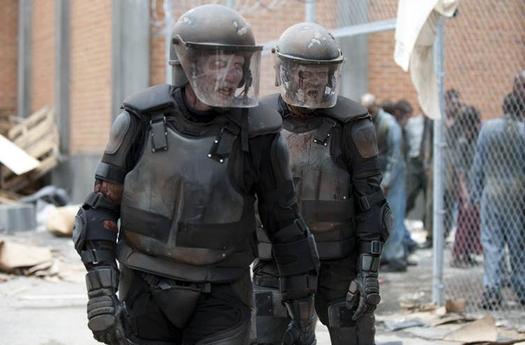 If you’ve got a long-running series about zombies, from time to time you have to shake things up to keep them interesting. After two seasons of watching The Walking Dead‘s walkers amble aimlessly, the series’ creators decided to inject a little bit of creativity into the mix. As Rick and the gang cleared out the prison that would become their home in “Seed,” they encountered a group of reanimated prison guards. Still fully clad in their riot gear, they were especially hard to kill because of their armor — and they looked like something out of a post-apocalyptic war movie.

The riot gear walkers were fun, because they were unexpected. They reminded us that when the world went to hell, people weren’t just holed up in their homes; they were doing their jobs, and some were still trying to keep the peace. Plus, it felt extra-triumphant when Maggie figured out how to get under their helmets and hit their brains through the neck.

6. The walker that ate Lori

The zombie that ate Lori | AMC

Lori Grimes wasn’t exactly the most popular character in The Walking Dead universe. So when she died in childbirth early in Season 3, many fans were glad to be rid of her. Despite her hated status on the series, it was difficult to watch Rick go a bit off the rails as he grieved for her. And when he tracked a trail of her blood to an almost-comatose-because-she-was-so-full zombie in “Say the Word,” her death took on an even more brutal and macabre quality.

It drove home the point that ultimately, the characters we grow to know are nothing more than a meal to walkers. And the zombie that seemingly ate Lori was oddly fascinating because it showed us a side of the undead we didn’t often see — one at least momentarily satiated from its unending quest for flesh and blood.

Michonne and her pet walkers | AMC

When we first met Michonne, she was cloaked in darkness, and flanked by two leashed, armless walkers. And in that moment, we were all a little geeked by her mysterious presence and fantastic survival skills. The Katana-wielding protagonist used her two pet walkers to mask her scent from other zombies.

We eventually learned that she had a closer personal connection to them than just using them as undead bodyguards — they were her partner and friend, two fellow survivors that fell by the wayside. The fact that she kept them around spoke to just how complex of a character Michonne would be.

Even without that added knowledge, though, her lassoed pet zombies were a welcome and inventive take on The Walking Dead‘s walker mythology and helped pave the way for one of the series’ most iconic character entrances yet.

Merle Dixon as a walker | AMC

Before we knew much at all about Merle Dixon, we knew he was kind-of a jerk. And that only proved to be more true as the series wore on and we learned about his relationship with the Governor. By the time Merle met his fate though, he’d managed to redeem himself just a little — if only by showing that he wasn’t in it solely for himself anymore.

That’s what made Daryl finding him in “This Sorrowful Life,” zombified and chowing down on a corpse, all the more tragic. The two brothers’ contentious relationship faded away in that moment, as the younger Dixon had to simultaneously deal with the outpouring of grief at losing his brother and trying to escape with his life.

Merle’s weaponized artificial limb didn’t make Daryl’s attempts any easier, and served as a sobering reminder of who he’d been before the walker instincts took over. In the end, Merle wasn’t a great guy; but he served his purpose on The Walking Dead. And he went down in exactly the same way he lived: fighting like hell.

A zombie with sagging skin | AMC

As The Walking Dead has progressed, and time has elapsed, the walkers have gotten decidedly more grotesque. That’s because they decay more and more with time, as the dead are wont to do. We saw an unforgettable example of that in the Season 5 episode, “Strangers,” which found Father Gabriel, Bob, and a few other survivors hunting for supplies in a nearby store. They found it flooded and crawling with walkers that had been submerged in the liquid for who knows how long.

As a result, their flesh was sagging off their bones, swelling and bloated, green and decayed, and their faces particularly deformed as a result. In other words, they were way grosser than normal. And, truth be told, just a little bit cooler than your everyday walker, too.

A walker’s head that is lit with a flare | AMC

If you’re going to survive a zombie apocalypse, you’ll have to be resourceful when it comes to taking out your undead enemies. Rick Grimes and his crew have clearly learned that, because they’ve come up with some pretty impressive kill methods over the series’ seven seasons.

There may be none more memorable, or darkly entertaining, than the one Rick employed in the Season 5 episode, “The Distance.” As walkers descended on him and his friends, they had to make do with the weapons at hand — one of which happened to be a flare gun.

Rick shot one rapidly approaching zombie straight through the eye socket, and for a brief and glorious moment, its entire face lit up like a firework. Then it collapsed and Rick realized that there were a bunch more walkers behind him that he still had to kill. Still, our fearless, if sometimes shortsighted leader, gets major credit for creativity.