‘The Walking Dead’: 10 of Carol’s Most Memorable Moments

When we first met Carol on The Walking Dead, she seemed like zombie bait. A quiet, skittish housewife, she hardly seemed like the type of character that would make it on the series long-term. But thanks to Melissa McBride‘s spectacular portrayal, Carol has transformed into one of the most talked-about and admired characters in the AMC show’s history.

Not everyone likes Carol — but it’s hard not to respect her. From scenarios in which she’s displayed incredible bravery to others where she’s shown a chilling dark side, Carol has consistently surprised Walking Dead fans time and time again. Here are 10 of Carol Peletier’s most memorable moments so far.

We hardly got to know Carol’s husband, Ed, but we know that he was not a great guy. He abused his wife and daughter, Sophia, and more or less kept them under his thumb. When he lost his life near the end of The Walking Dead‘s first season, no one was particularly upset.

That is, except, for Carol, who sat next to his corpse and seemed almost shell-shocked by his loss. She offered to take on the burden of preventing him from becoming a walker, which seemed pretty normal in an honoring-your-dead-spouse sort of way. Then, she basically attacked him with a pickaxe until he was nothing but a pile of blood and mush. In that moment, we got our first glimpse of the woman that Carol had hidden from her husband — a little bit traumatized, and way tougher than we gave her credit for.

Much of the first half of The Walking Dead‘s second season centered around the group trying to find Sophia. When they finally located her — zombified and hidden in Hershel’s barn — it was horrifying for everyone involved. But no one took it harder than her mother, Carol, who collapsed to the ground and let her grief pour out of her like a flood. Despite the way that the first half of Season 2’s episodes seemed to drag on, despite how drawn out the Sophia subplot seemed, that moment still ranks among the saddest in The Walking Dead history. And it changed Carol forever by signaling the end of her pre-apocalypse life. 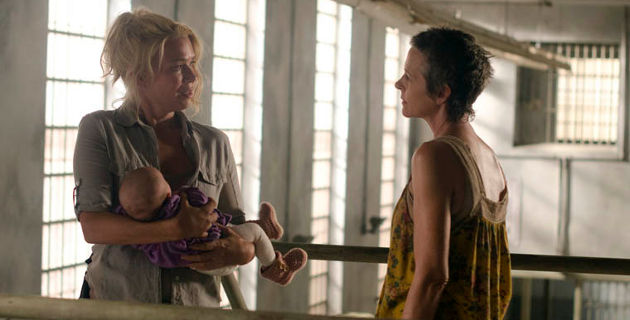 For much of Seasons 2 and 3 of The Walking Dead, Carol stuck to the background, helping out around the prison and slowly gaining survival skills. As Rick readied for war against the Governor and Woodbury, though, she started to show signs that she had changed significantly.

When Andrea came to broker a peace deal at the prison in “I Ain’t a Judas,” she had a telling conversation with Carol. The formerly abused housewife casually mentioned to the Governor’s girlfriend that she could think of a pretty easy way to end the feud: waiting until he was asleep, and then offing him. Her lethal strategy shocked Andrea — though she almost used it later in the episode, proving that Carol had some pretty good ideas up her sleeve.

The relationship between the often-socially inept Daryl and increasingly confident Carol has been a big topic of conversation among Walking Dead fans. Since early Season 3, there have been hints of a mutual attraction between the two. At the beginning of Season 4, she took their flirtation to another level, calling Daryl “Pookie” before he headed off on a supply run. The pet name seemed to unnerve the tracker, which only seemed to delight Carol more. Though there have been several sweet moments between the two, this one in particular delighted fans who long for the two to finally get together. 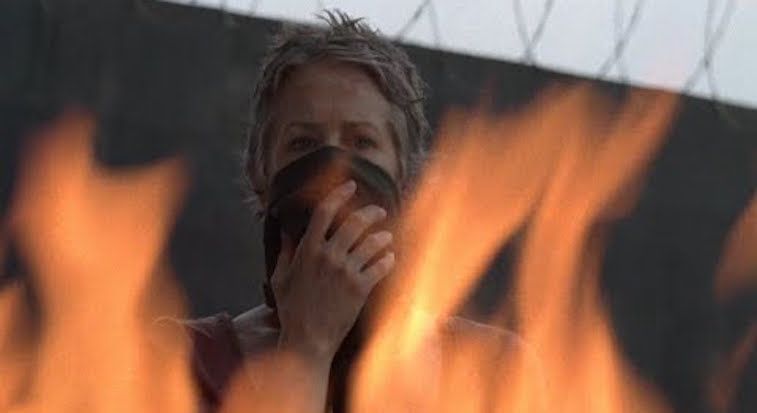 At the beginning of Season 4, everything seemed pretty hunky dory at the prison. Rick’s crew had settled into a comfortable life, but then a deadly and fast-acting flu bug hit one of the cell blocks and their lives were once again thrown into turmoil.

When Carol saw that two fellow inmates, Karen and David, had no hope of recovering, she took matters into her own hands to try to stop the illness from spreading. She killed them both and burned their bodies, though she didn’t admit to it at first. It wasn’t until Rick put two and two together and asked her, point blank, if she’d done it that she fessed up. Rick was clearly shell-shocked that she could have acted so callously, and with little remorse. The moment that transpired between the two marked perhaps the most significant shift in Carol thus far: she was open, honest, and unemotional, which was perhaps the most chilling part of it all.

The Walking Dead‘s fourth season marked the clearest change in Carol Peletier’s role and personality. She took on a leadership role within the prison, and became the de facto teacher for most of the children in the compound. In “30 Days Without an Accident,” though, we learned that she was using their lesson time to teach them way more valuable skills than just reading comprehension. Once they were left alone, she pulled out a cache of weapons and offered up advice on how to use them. Carol purposely kept these part of her lessons from Rick because she knew he wouldn’t approve. In doing so, she not only proved that she was capable of being manipulative and underhanded, but that she also had her own ideas on how their sanctuary should function.

“The Grove” is frequently cited as one of The Walking Dead‘s best episodes ever. And with good reason — it’s a stirring hour that goes deep and offers up a truly horrifying conclusion to the subplot surrounding Lizzie’s fascination with the walkers. Once Carol realizes that the young girl murdered her sister so that she could be “like” the zombies she’s obsessed with, Carol knows that she has no choice but to eliminate the threat Lizzie poses to herself, Tyreese, and Judith.

Her maternal instincts come out in full force as she leads Lizzie into a quiet grove and tells her to examine the flowers there. Once the girl is distracted, she raises a gun in her trembling hands and shoots her. Carol’s sadness at not being able to save Lizzie and Mika was written all over her face, but she showed once and for all that she would stop at literally nothing to stay alive.

In the Season 5 premiere of The Walking Dead, Rick and most of his friends were captured by cannibals and seemed doomed to suffer a disgusting fate in their hands. Luckily, Carol had tracked them and sprung into action to save the day. She covered herself in a poncho of zombie guts and went full commando, shooting a propane tank, causing a commotion, and then storming in to take out the Terminus crew one by one. It wasn’t just one of Carol’s most triumphant moments, it was one of the most exciting in the entire series’ history. And it showed us that the once quiet woman had become a full-fledged fearless leader.

There are rarely funny moments in The Walking Dead. Between the zombies and frequent tragic deaths, there’s not much room for laughter. But when Deanna welcomed the team into Alexandria and asked to interview them on video tape, it provided the viewers a chance for some levity as our favorite characters struggled to make sense of their new surroundings.

Carol’s encounter, in particular, was rife with dark humor. She snapped into housewife mode and turned on the charm, staring straight into the camera and informing the former congresswoman that she was “a real people person.” Anyone who’s followed the show knows that Carol would sooner execute someone on sight than sit down and get to know them. Since Deanna wasn’t in on the joke, it made it even funnier.

As Season 6 wore on, Carol started to show signs that all of her past actions were taking a psychological toll. She was having a hard time trusting the Alexandrians, and wanted to stay armed just in case things went south — but in trying to get a handle on the weapons situation, she ran into Sam, a skittish and intensely curious boy. Carol then did what Carol has always done best; she flipped the situation to her advantage. She told Sam that if he told his mother what he’d seen, a monster would come and get him — but that if he could keep her secret, she’d make him all the cookies he wanted. It was a particularly harsh way to go about keeping herself incognito, that’s for sure, but hey — that’s Carol.