‘The Walking Dead’ Episode 7: Review, Recap, and What’s Next 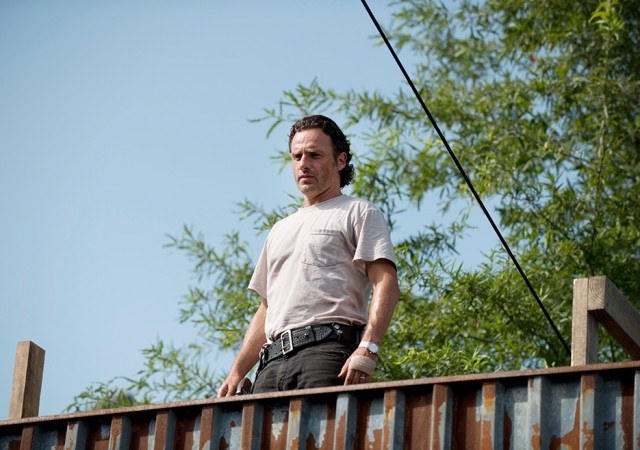 This is a recap you’re not going to want to read unless you’re caught up with the show. Like episode three (“Thank You”) the latest episode (“Heads Up”) is another barn-burner. And, a certain question is answered tidily.

In “Heads Up,” episode writer Channing Powell and director David Boyd touch base with almost all of the show’s most pertinent characters: Rick, Carl, Maggie, Morgan, Carol, Jessie, Tara, Denise (the doctor), Spencer, Deana, Enid, Rosita, Eugene, and even Judith.

The show, since episode three, has been in motion, but it has been sort of a sideways motion (although their tampering with spatial elements and linearity is always a lot of fun). Viewers were able to glimpse Morgan’s background, explore the Jessie and Rick dynamic, and catch up with Daryl. But it was about time that the show runners regrouped and found their “core” again.

“Heads Up” is an impressive product for The Walking Dead repertoire, in that it touches most points of the spectrum: it deals with more “soapy” elements, and gets gritty when it has to, with regards to season one characters, and the lingering fight for Alexandria.

In “Heads Up,” Powell does not bite off more than she can chew. The episode needed to tie up some loose ends moving into next week’s mid-season finale. In the 60 minutes (if only) of show, the characters take a hefty step forward. The infrastructure is now at risk, the characters have been emotionally and physically charged, and Rick is becoming more and more callous (it’s OK, these Alexandrians need a ruffian around).

Click forward for the big reveal, and a more lengthy plot synopsis.

So, to clarify, this is a page of spoilers. If you’ve reached episode three and have been left suspended in midair, dangling, waiting for the show runners to provide you with just one useful morsel of information, but haven’t seen “Heads Up,” then do not continue reading. 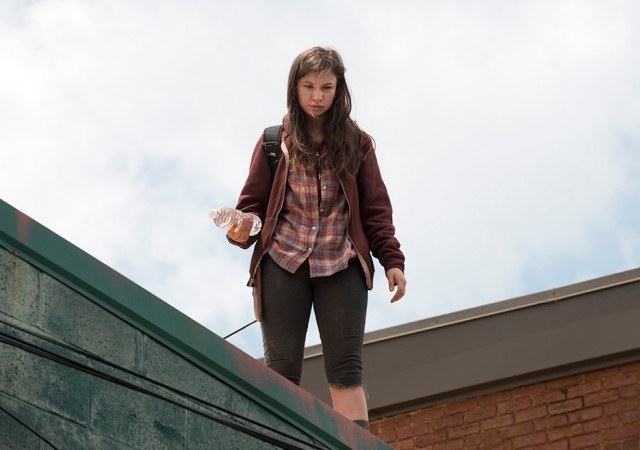 The November 22 episode begins as Glenn (Steven Yeun) endures the Nicholas suicide and subsequent tumble to the ground (and entrails feast). Glenn slips out from under Nicholas, and finds safety beneath the weighty dumpster the two characters once stood atop of. Glenn fends off a few walkers who lumber after him, and these corpses somewhat pad him from the rest of the herd. When next he is conscious, the walkers have left the vicinity and Enid (Katelyn Nacon) appears, and throws Glenn a water bottle. He follows her into an abandoned building, trying to find out what has happened to Alexandria and to his wife. She, however, attempts to flee, and draws a gun on him. Somewhat begrudgingly, Enid eventually gives in and takes to the road with Glenn. Enid carries green balloons on her backpack, in hopes of fending off a group of walkers.

Back at Alexandria, Morgan has slipped into a more innocuous version of his earlier daze, and admits to the apparent “council” of Alexandria (which features Rick, Michonne, and Carol) that he cannot tell right from wrong anymore. Rick seems on the verge of banishing him.

Morgan also admits to having spared wolves’ lives — the same wolves who went on to hinder Rick’s quarry plan. Morgan remains adamant about the pacifism, and believing in the best in people — in hopes that they can change. He eventually goes as far as to approach Denise Cloyd (Merritt Wever) about obtaining medicine for the Wolf he is holding in a basement cell. He takes Denise to the spot, but Carol follows close behind, with her omnipotent presence, and questions his intentions. Viewers do not get to see the injured wolf — although Morgan admits he’s not sure whether the man is infected or not. 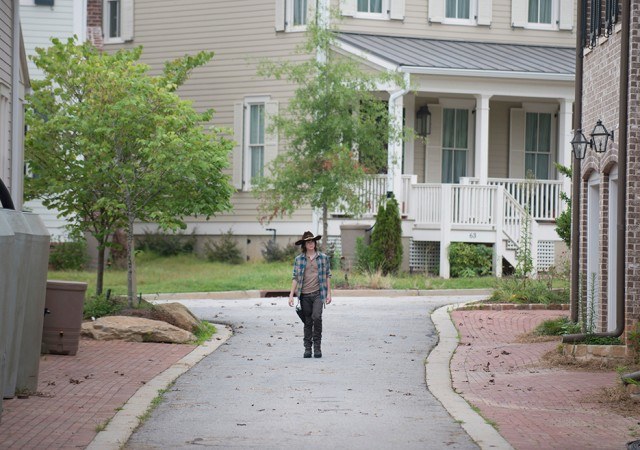 As for Maggie, she’s just about been through it all; but a part of her still believes Glenn is alive. She takes more watches at the post to see beyond the wall — to look for signs of her husband.

Rick is also dealing with a lot: the inevitable breach of the wall, the instability of the more lucent Alexandrians, Morgan’s pacifism, Deanna’s (Tovah Feldshuh’s) brief check-out, his infatuation with Jessie (Alexandra Breckenridge), keeping tabs on Judith, and making sure Carl gets along OK with Ron (Austin Abrams). In “Heads Up,” he attempts to buttress the walls (with the help of Tobin (Jason Douglas)), teaches Ron how to shoot a gun, and counsels Morgan. As it turns out, Ron wants to use the gun to shoot Carl (huh?), for “stealing” Enid perhaps. What’s more, he has to save Spencer from a daring high-wire excursion out of the community, and suppress his anger after Tara (Alanna Masterson) risks her life to save Spencer.

By the end of the episode, what looks like a steeple is breached by the weight of the walkers below, and tumbles onto the fence. This occurs just as Maggie discovers (vis a vis the green balloons) that Glenn is alive!

The collapsed building leaves a gaping hole in Reg’s wall, and becomes an access point for the ravenous zombies. And there are a few people injured to boot.

Be sure to catch The Walking Dead‘s mid-season finale on November 29 at 9 p.m. on AMC.