‘The Walking Dead’: Every Character Most Likely to Die in Season 8

If you couldn’t tell from its title, The Walking Dead is a series about zombies. And because it’s about the undead, and all the people still grappling to survive in a harsh climate, it’s also a series that kills off its characters at regular intervals. That habit has led to some truly heartbreaking moments over the years. And it’s also conditioned fans to wonder: Who’s going to be next?

The seventh season of The Walking Dead was particularly brutal. Though the body count wasn’t as high as previous installments, we said goodbye to beloved characters like Sasha, Abraham, and Glenn. Thus far, in Season 8, we haven’t had too many casualties. But that doesn’t mean that fans should rest easy.

With the war between Rick and Negan looming, there are sure to be plenty of casualties. Here’s every character that is likely to die in The Walking Dead’s eighth season.

The leader of the Kingdom made huge strides in Season 7 — but they may have signaled the beginning of the end for him, too. By the end of Season 7, Ezekiel had grown from an isolationist leader to a full-on ally in the fight against the Saviors.

We’ve already seen that he’s willing to run headfirst into battle (well, after offering a rousing speech, that is). But that same bravery could get him in trouble. In The Walking Dead comics, Ezekiel dies years after the All Out War is over. And the fact remains that he’s one of the few deceased comic characters remaining. That, combined with Season 8’s action-heavy story, could mean his time could be running out.

Jadis has definitely made some enemies so far. | AMC

One of the stranger plot lines in Season 7 came in the form of Jadis and her junkyard gang. They speak their own language (sort of). They’re quick to switch allegiance. And while that strategy may give them a short-term advantage, it probably won’t work out well in the long run.

We’re still not sure if, or how, Jadis and her crew will fit into the Season 8 landscape. But if she does show up to fight in the All Out War, her days could easily be numbered. After all, she’s turned her back on Rick — and in doing so, she made a lot more enemies than she may have bargained for.

There are few characters that have been willing to stand up to Negan when they meet him face-to-face. Rosita is one of them — and her bravery has put her in a tight spot more than once. But she’s managed to survive all her encounters with him so far — and had to watch as he’s murdered her loved ones instead.

It’s understandable that Rosita would have a chip on her shoulder. But these days, that’s about all she seems to have. And that kind of stagnant development on The Walking Dead can sometimes be a sign that a character has run his or her course. Rosita could become a casualty of the war with Negan. Or she may go out in another, even more gruesome, manner.

In TWD comics, Rosita and Ezekiel became two of the first major casualties of The Whisperers, another hostile survival group that faces off with Rick’s crew. Their heads are left on spikes for their friends to find.

A cryptic post on The Walking Dead’s Instagram in 2016 seemed to hint that the Whisperers might make an appearance soon. And if they do, it’s a safe bet that they may take out some similar victims.

It’s always been clear that Sherry was reluctant to team up with the Saviors. And she’s suffered her share of tragedy while living under Negan’s roof. Now that she’s on the lamb, Dwight can hold out hope that she’s safe. But that’s likely a pipe dream.

Sherry could suffer an untimely fate in all number of ways in Season 8. Dwight could find her, zombified, in the woods outside the Saviors’ compound. Or she could be captured and killed by Negan or Rick’s crew.

One thing is for sure: Sherry’s death would likely bring about a huge change in Dwight. And it could finally be what forces his hand where Negan is concerned.

The Saviors seem to fall into two basic camps: those that are reluctant, but willing to stand by Negan’s side, and those that are downright gleeful about it. Simon is on the latter side, and he’s proven himself to be one of Negan’s most valuable, and enthusiastic, foot soldiers.

But Negan has proven time and again that everyone in his camp is expendable. And it’s very likely that he will lose the vast majority of his back-up if he’s ever going to be taken down. So that means that Simon, unless he sees the light, could go down in flames with the rest of the Saviors before Season 8 is through.

As of the Season 8 premiere of The Walking Dead, only three characters remain that appeared in the very first episode: Rick, Carl, and Morgan. And though we lost track of Morgan for several seasons, his story has been one of the most intriguing (and sometimes frustrating) in the series’ entire run.

But Morgan’s time as a guiding force for Rick, Carol, and many other characters could be coming to an end. From a story perspective, it’s hard to see how much further they can take a man who went from a barely-coherent killing machine, to a pacifist, to someone somewhere in the middle. And if TWD continues to follow the comics’ trajectory, then Morgan’s days are most certainly numbered. 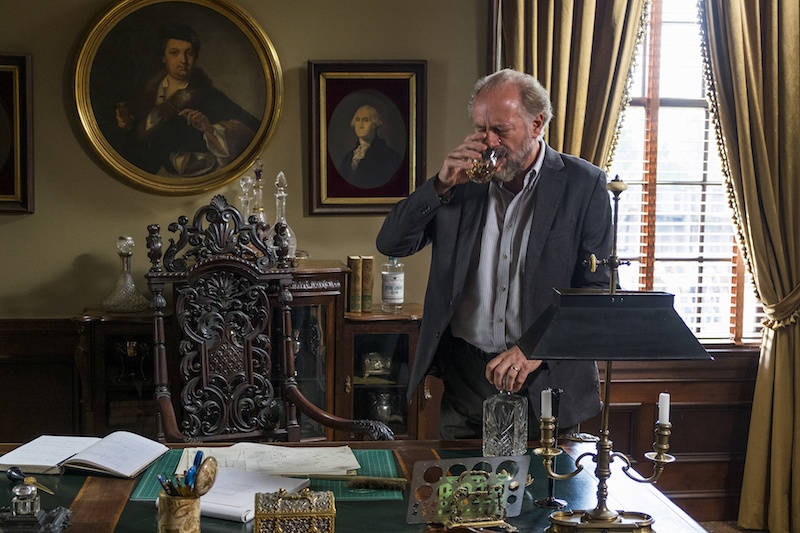 In most cases, fans are genuinely sad when a Walking Dead character bites the dust. But Gregory would join the shortlist of insufferable characters that we’d actually love to see six feet under. And the Hilltop leader’s demise could easily transpire in Season 8.

For one, he’s managed to be the only character that’s made enemies of both Rick’s crew and Negan’s. And he seems to be lacking in the core survival skills that have kept all his former allies alive.

In TWD comics, Gregory is hanged at the Hilltop after he attempts to murder Maggie. While his story seems to have taken a slightly different path on the AMC series, he could still easily be taken to task for his treasonous behavior. And if he does perish at the hands of Maggie, or anyone else on either side, no one could say he didn’t have it coming.

The Walking Dead airs Sunday at 9 p.m. Eastern on AMC.