‘The Walking Dead’: Inside the Mid-Season Finale, ‘Start to Finish’

Spoilers ahead for the latest episode of TWD! 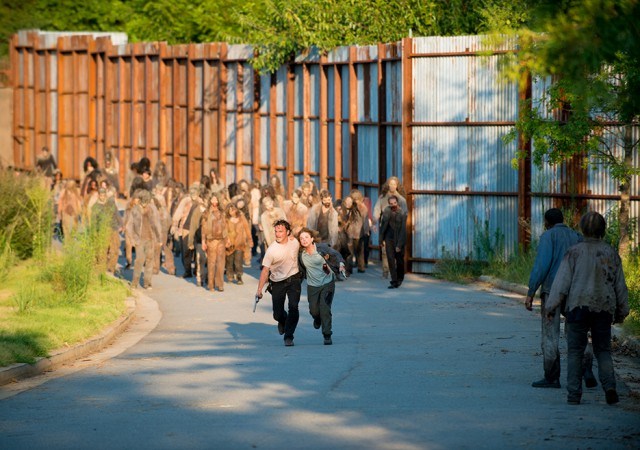 AMC will be running a marathon of all episodes of The Walking Dead starting at 9 a.m. ET on Sunday and continuing until 4 a.m. ET on Monday, which means it’s the perfect time to catch up on where the show left off last November. Here’s a rundown of Season 6, episode 8, and a few predictions about what lies ahead.

A few loose ends are tied up in the Season 6 midseason finale  of The Walking Dead, entitled “Start to Finish.” The Daryl/Sasha/Abraham arc is not addressed (aside from the “prologue” bit shown after the first five minutes of Into the Badlands), and a whole new adversary is introduced after the credits.

But, all things considered, that is background noise. “Start to Finish’s” poignancy comes from the events that unfold inside Alexandria. As a matter of fact, episode writer Matthew Negrete and director Michael E. Satrazemis hyper-focus on two buildings. And while there were no epiphanies, and Maggie does not get to hold her beloved, the showrunners’ abilities to showcase the dichotomy that has emerged in the walled community is satisfactory.

This dichotomy is the balance between innocence (the Alexandrians) and being “tarnished” (Rick and his band of one-time interlopers). Basically, it comes to a head as a prominent character of the past season meets her demise.

Another avenue where Negrete and Satrazemis shine is their ability to mix exterior and interior conflict(s). That is: the invasion of the “mega herd” and Rick’s assumption of power inside the walls. In only an hour’s time (which is really just over 40 minutes), the characters are pitted against the walkers that have infiltrated Alexandria, hide from them speedily, and then have to “patch up” a few holes in the house to prevent their advance.

It’s nice to see how the characters dealt with a handful of new dilemmas. The episode’s production values are competent as well, for the walkers are sufficiently eerie and the bare-bones home that Morgan operates out of is a perfect venue for a showdown with Carol (yes, it happens).

If there’s one aspect to glean from the episode, it’s that perhaps the Alexandrians are just not cut out for this more savage, merciless world of bloodshed and zombie growls. The second half of the season promises to be even better than the first half, which boasted about five memorable episodes, with a few ubiquitous moments. In 2016, the core characters will have to extend their little progression through town wearing sheets covered in guts — to meet up with the others. They’ll also come to face Negan, who has already offered an ultimatum to Daryl, Sasha, and Abe.

Now, let’s be prophetic; here’s a prediction: Rick will meet up with Tara, Rosita, and Eugene across the street, and rescue Maggie who’s on the lookout tower hiding from walkers, but will lose someone like Eugene as they escape. They’ll have to divert these walkers with a substantial sort of eruption, or firing of flares. In the process, Negan and company will arrive to wreak havoc on Rick and Alexandria.

Click forward to read a more detailed plot synopsis of “Start to Finish.” 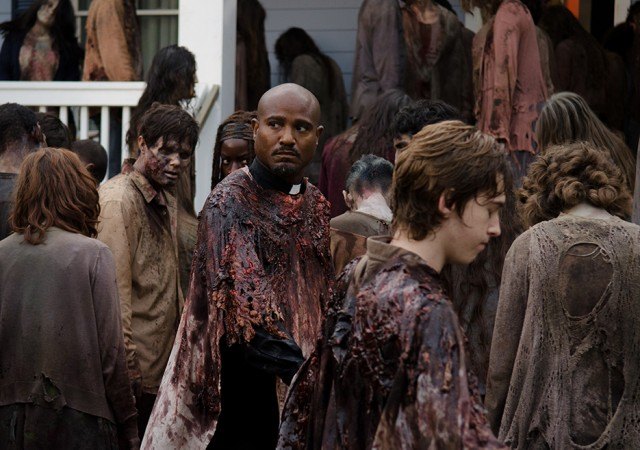 The episode begins as Sam (Major Dodson) listens to Tiny Tim’s “Tiptoe Through The Tulips” while ants invade his room and hover over some leftover food. It is a nice sequence of foreshadowing, of the infestation to come.

Next, Rick is shown after the “steeple” falls down on the fence, and Deanna immediately comes to his rescue as walkers get uncomfortably close. When they encounter another group of zombies, Deanna falls onto a blade and is injured. Rick saves her and the two meet up with Michonne, Carl, Gabriel, Jessie, and Ron. They make a break for the closest home. Nearby, Tara, Rosita, and Eugene wind up in a garage, while Carol and Morgan make it to the same house where the “Wolf” is being held. Apparently, Carol has sustained a concussion along the way.

As for Rick and company, they discover that Deanna has been bitten shortly after arriving in the house. Of course, she knows what that means (though her people have had to face little turmoil over the past 24 months or so). While she begins to succumb to the infection, she gets close with Michonne, and urges her to find a purpose for not only her own life, but for the greater good (this community). When she talks with Rick, she urges him to look after her son Spencer (Austin Nichols); it seems that while apprehensive, Rick will acquiesce.

As this unfurls, Ron tries to corner Carl in the garage and draws a gun on him. In an ensuing fight, the two make a racket and alert the nearby zombies. The walkers break into the garage, then the house; and Rick is forced to buttress the doors with sofas, etc. Eventually, the walkers bust down this stopgap and make for the upstairs portion of the house — where Deanna lies awaiting her death. Rick’s quick thinking results in the gang smearing walker guts all over themselves, to exit the house. (Sam, however, has to be coaxed into it.) They slip down the stairs, and out the door, wearing white sheets covered in innards. As they leave, Sam (of course) has to practically cry out for his mother (Jessie), which could spell danger in the next half of the season. Deanna goes down in a blaze of glory as walkers approach the upstairs bedroom. 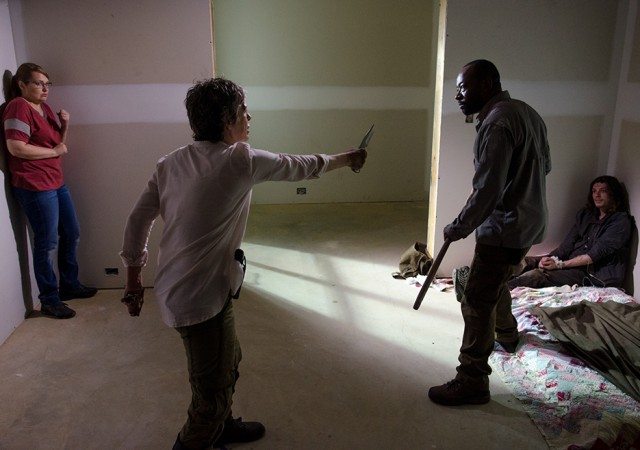 As for Morgan, things come to a head for him as he, once again, tries to shield the Wolf in the basement from Carol’s wrath. Carol, nursing her concussion, pretends to fall asleep. As she does so, Morgan makes for the basement where the Wolf, and nurse Denise (Merritt Wever) lie waiting. Carol immediately snaps out of it, though, and hustles down the stairs to kill the Wolf. Morgan follows on her heels. Once downstairs, Carol forces Morgan to stand down, but he refuses. A fight breaks out, and Morgan body-slams Carol onto the pavement. But, as though he upset the equilibrium, he is quickly knocked unconscious by the Wolf. He snags Carol’s knife, grabs a hold of Denise, and then saunters past Tara, Rosita, and Eugene, who have to helplessly watch as the Wolf holds a knife to the nurses’s throat. He, too, exits an Alexandrian house…

In a “prologue” to the next episode (shown during a commercial break in Into the Badlands), Daryl — driving the tanker — is stopped on the road by a band of bikers who wield rifles. Their leader, Negan, urges them to hand over everything they currently have — for it is “not theirs.”