‘The Walking Dead’: 10 of Michonne’s Most Memorable Moments

Michonne hasn’t been around quite as long as some of the other essential characters on The Walking Dead. But that doesn’t mean she isn’t every bit as important to the series as, say, Carol or Maggie. From her early alliance with Andrea to her now undeniable connection with Rick and Carl, Michonne has forged unbreakable bonds and fought her way through some seemingly impossible scrapes. And she’s done it all with an admirable resilience.

When she first arrived, Michonne was known more for her awesome combat skills. But in nearly five full seasons on The Walking Dead, she’s become a nuanced and fascinating character to watch and root for. Here are 10 of Michonne’s most memorable moments on The Walking Dead so far.

1. The first time we saw her

Michonne and her pet zombies | AMC

Near the end of The Walking Dead‘s second season finale, Andrea was on the run and seemingly alone. Then, out of nowhere, a hooded figure used a sword to slice through the walker that was bearing down on her. The savior’s face was in shadows and she was flanked by her two armless pet zombies. Thanks to the katana she was wielding, comic book fans knew instantly who was hiding under the hood. But those who were watching TWD blind could only sit in awe and wonder who the heck Andrea had just met.

This first glimpse of Michonne is still one of the most visually striking and exciting in the series’ seven season history. And it only hinted at the awesomeness that was to come. 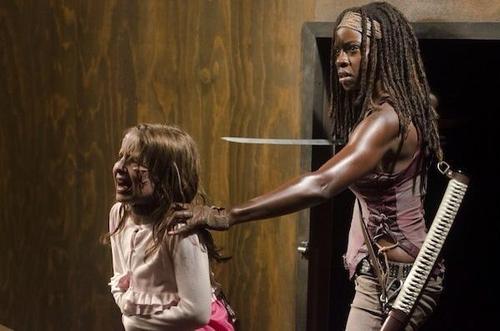 Even though the Governor offered refuge at Woodbury, Michonne wasn’t quite as trusting as Andrea when it came to their new ally. And when she realized that he was trying to kill her, she snapped into survival mode. First, she gutted a few walkers and left a warning in entrails for her pursuers. Then, in the Season 3 midseason finale of The Walking Dead, Michonne hit the Governor where she knew it would hurt him the most: she killed his zombified daughter, Penny, right in front of his eyes.

You could argue that she was showing mercy to the young walker. And it was definitely unhinged for the Governor to keep her around in her cannibalistic condition. But Michonne’s retaliation against him still seemed brutal. It also showed us that she would take literally no prisoners when it came to staying alive.

For the better part of The Walking Dead‘s third season, Michonne was pretty hard to read. We knew she had a kinship with Andrea, and that she was hesitant to trust just about anybody else. Other than that, she was aloof.

In Season 4, we began to get to know her a little better, starting with “Infected.” She seemed determined to avoid any contact with baby Judith, until Beth plopped the youngster into her arms. Then, to viewers’ surprise, instead of looking as though she had no idea what to do with the child, she held her close and began to cry.

It wasn’t just a moment that showed us the “softer” side of the hardened warrior we thought we knew. Though no words were spoken, the embrace spoke volumes about an as-yet untold grief in Michonne’s life. And it added another layer onto an increasingly complex character. 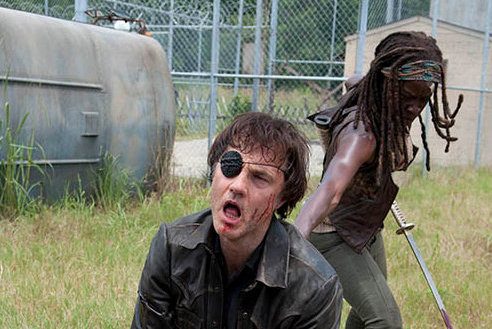 The Governor and Michonne | AMC

The Governor was a thorn in the side of many of our favorite Walking Dead characters. But despite Rick’s qualms, or Maggie and Glenn’s hatred, it seemed that no one hated him quite as much as Michonne. So it was fitting that she was the one to strike the fatal blow against him in the Season 4 episode “Too Far Gone.”

Sure, Lily was the one who rightfully did him in with a bullet to the head, but not before Michonne injured him beyond saving. She sent her sword straight through his chest just as he was close to killing Rick. It was a moment that felt both triumphant and tragic, since he’d killed Hershel moments before with her katana. But anyone watching would have known that Michonne wasn’t just avenging Hershel, but Andrea and herself as well — and that the moment had been a long time coming.

5. Fighting off the hoard

Michonne clearly spent a lot of time on her own before she found Rick and his friends. And in “After,” the Season 4 midseason premiere, we saw her grappling with what it might be like to fly solo again. Michonne seemed as close to broken as we’d ever seen her for much of the episode, dreaming of the friends and son she’d lost and wandering haplessly through the woods with her new pet walkers. When she saw a zombie that resembles her perhaps a bit too closely, though, something inside her snapped. Michonne took on the herd around her one-by-one, including the ones she’d tasked with being her undead bodyguards. Then, she burst into tears.

It’s a harrowing sequence, one in which we see Michonne at both her strongest and perhaps her most vulnerable. It’s also one that showed us she wasn’t willing to give up, or to condemn herself to a solitary life any longer.

After spending more than a season staking her claim on stoicism, she began to come out of her shell. And at first, it was thanks to Carl. After they ventured out on a supply run in “Claimed,” Michonne noticed that Rick’s son seemed down, likely because he believed his sister Judith was dead.

Instead of trying to tease out what was bothering him, she decided to cheer him up a different way — by spraying a ton of Crazy Cheese into her mouth and then doing her best walker impression. Michonne looked completely ridiculous, but it got Carl to crack a smile. Not only was it one of the most lighthearted moments in an otherwise grim couple of episodes, but it showed how quickly the bond between the two had grown. To this day, their relationship remains one of the sweetest and most genuine on The Walking Dead.

As Season 5 of The Walking Dead drew to a close, we began to see the cracks in Rick Grimes’ psyche. He wasn’t comfortable settling into the Alexandria Safe Zone’s idyllic way of life, especially because it seemed like everywhere he looked there were unprepared citizens and jerks that beat up on their wives. So, in “Try,” his paranoia got a little out of hand. He attacked Jessie’s husband, Pete, and then sat in the middle of the town, waved his gun around, and ranted and raved for a bit. It really wasn’t his best moment.

Luckily, Michonne was there to knock him down a peg or two, and she did, by punching him hard enough to render him unconscious. Up until that point, it seemed like Rick and Michonne were really bonding, so it took a lot of courage for her to do what it took to keep him in line. Plus, it proved that she’s not only good with a gun and a sword — you wouldn’t want to take her in hand-to-hand combat, either.

By the time Michonne and her friends found their way to Alexandria, it was clear that she was ready to take a breather. Life on the road was hard on her, especially, and she craved normalcy — so much so that she hung up her katana in her new home and took a new job as a weapons-free constable. If it seemed as though she was retiring it forever though, unfortunately she didn’t get the chance.

In the Season 5 finale, “Conquer,” Pete stole it from her house and used it to kill Douglas. Then, in the episode’s closing moments, Michonne, still in her uniform, chose to return it to its rightful place, in her holster, rather than the mantle. It’s a quick scene, one that sneaks in after the credits, and features no dialogue.

Still, we knew exactly what Michonne was experiencing as she weighed the price of keeping her weapon by her side. The fact that she chose to do so spoke volumes about the potential dangers she knew she could face in the future. And it showed that even if she didn’t want to blend her new world and her old world together, she was going to have to.

9. Getting together with Rick

There’s not much room for romance on The Walking Dead. But that didn’t stop Rick and Michonne from realizing they had feelings for each other in the Season 6 episode, “The Next World.” Their love story evolved over a long period of time, as they gradually grew to trust and depend on one another.

So when Rick handed her some breath mints and their fingers ended up entwined, many fans at home were probably yelling, “Finally!” The scene felt right, because they came together naturally and as equals; and Michonne’s soft laugh of disbelief as they became, er, acquainted with each other made the moment seem somehow even more perfect.

10. Laying waste to the walkers on the road

There’s been a lot of uncertainty for Rick and his friends throughout Season 7 of The Walking Dead. But in the midseason premiere, “Rock in the Road,” he and Michonne found themselves on steadier footing after a pretty awesome encounter with some walkers.

In order to clear a stretch of highway from a pesky herd, the two did their best MacGyver impersonations. First, they rigged a wire between two cars and drove in tandem down the road, taking out dozens of walkers in a gory, bloody massacre. Then, they fought through the rest of the hoard to escape as the dynamite they laid down exploded the rest of them.

It was a gutsy move, one that left Sasha, Rosita, and Tara unnerved. But it also showed us the very best of both Rick and Michonne — their ingenuity under pressure, their unwillingness to give up, and their commitment to working together to survive.