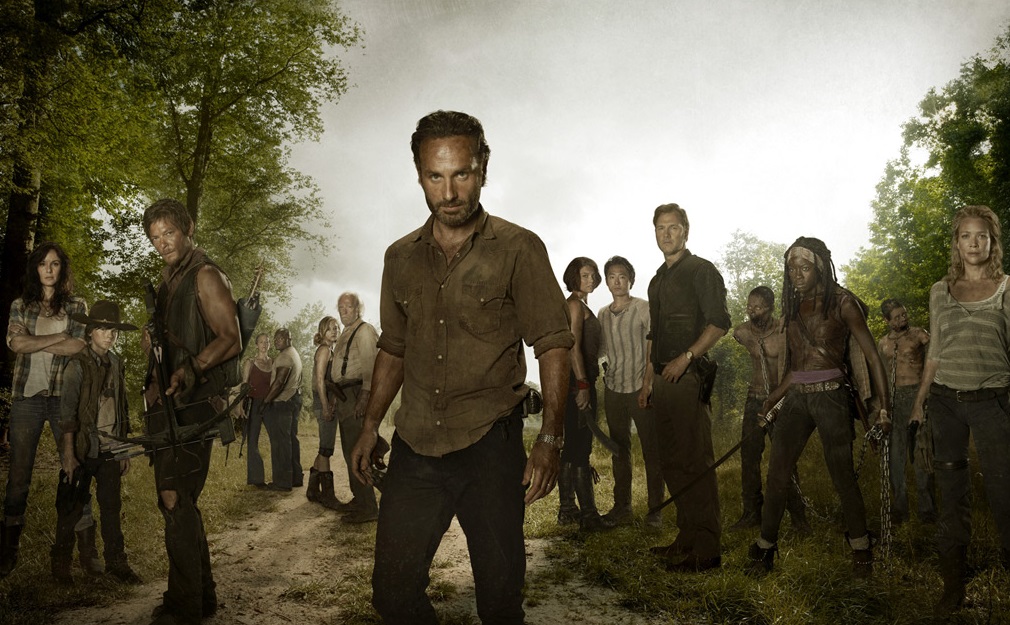 Rick Grimes is, in so many ways, the moral barometer of The Walking Dead. Portrayed by the oft-underrated Andrew Lincoln, the de facto leader of survivors is impulsive, and violent, and flawed. He’s also deeply devoted to those he calls family. In seven seasons on TWD, he’s been brought to the brink of insanity and defeat on more than one occasion, but has found a way to fight back and be the leader that his allies need. He’s easily one of the most memorable characters, and arguably the one that dictates the series’ mood and tone more than any other. Rick has certainly had his ups and downs. In some moments, he’s shown himself to be a true hero. In others, he’s revealed a dark and dangerous side that no one should underestimate. Here are 10 of Rick’s best and worst moments on AMC’s The Walking Dead.

One of Rick Grimes’ primary motivations throughout The Walking Dead has been to protect his loved ones. We saw it early on, as he frantically began searching for his wife, Lori and son, Carl after awakening from a coma and encountering a terrifying zombie apocalypse. When he found them, in the Season 1 episode “Tell It to the Frogs,” it was the series’ first genuinely emotional moment. He broke down in tears at the sight of Carl, and collapsed to the ground with his family in his arms.

Though we hadn’t even been given a chance to know the Grimes as a family — and though we did know that Lori had already moved on to his best friend, Shane — it was heartwarming to see their connection. And it established Rick as a man who wasn’t just a survivor, but a man who had something to survive for. 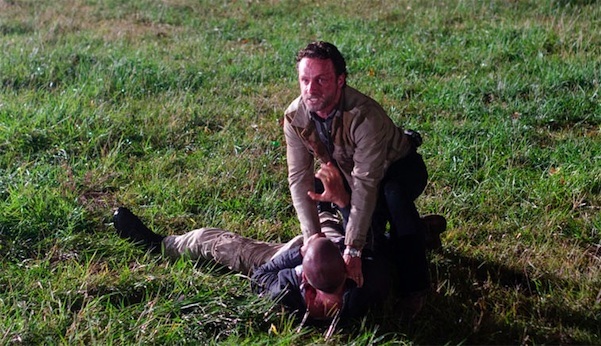 Rick’s relationship with Shane was a driving narrative force in the first two seasons of The Walking Dead. From early on, it became clear that they would eventually hit a breaking point. When it came, in “Better Angels,” Rick finally realized that Shane wouldn’t stop until he killed him. So, he took matters into his own hands. Rick has killed a lot of characters over the years, both dead and undead. But there’s something especially haunting about his final confrontation with his former best friend. He was clearly devastated that he had to end Shane’s life in order to save his own. That murder marked a turning point in Rick’s life; it deepened the emotional chasm between him and his wife. It revealed his violent survivalist instincts to his son. And it created a hole in his life that he would never completely fill.

“Beside the Dying Fire” | AMC

Rick Grimes definitely didn’t enter into the zombie apocalypse with the goal of leading a bunch of fellow survivors through the wilderness. When he found himself in that position, he struggled to find his voice. For much of The Walking Dead‘s second season, he butted heads with Shane, Dale, and Hershel over how their group should proceed.

By the time the farm went up in flames and he and his friends found themselves on the road, Rick was ready to draw a line in the sand. He laid out what he knew — that they were all going to reanimate once they died, and that he was the one who knew how to keep them alive. And then, he told them “This isn’t a democracy anymore” — and thus began the “Ricktatorship.” Over the next few seasons, his leadership style has evolved. But fans will never forget the first time that signs of his unforgiving nature appeared.

Let’s face it: Lighthearted moments on The Walking Dead are often few and far between. And they rarely feature the series’ main protagonist, since he’s usually busy slaying zombies, negotiating with sociopaths, or mourning the loss of someone he loves.

So it’s a little, well, funny that one of the most unintentionally comedic moments came from an angsty interaction with Rick and his wife, Lori. In the Season 3 premiere, she confronts him about the distance he’s kept from her since Shane’s death. He shoots back that he’s been busy doing, “Stuff, Lori. Things.” The moment on its own doesn’t sound all that funny, but the somewhat stilted dialogue, the way he spits it out and the utter contempt he displays for her made it darkly humorous. The moment spawned endless memes and remains a fan favorite. And, hey, at least Rick got a laugh or two amid all the horror and carnage — even if it was on accident.

“The Killer Within” | AMC

Lori Grimes was never a favorite character for fans; by the end of her life, she wasn’t even really in good standing with her own husband. But the sacrifice she made so that her daughter, Judith, could live was nevertheless tragic. And when Rick learned that she was gone, after Carl and Maggie emerged from the jail without her, he completely broke down for the first time in The Walking Dead. He seemed to go through several stages of grief almost all at once, and each was palpable. He went from disbelief to total despair, and when he crumbled to the ground it was almost uncomfortable to watch him suffer.

Rick’s subsequent breakdown — in which he was sure the voices of his dead friends were talking to him and routinely saw the ghost of his wife — made for some striking character development. But the onset of his grief was truly something to behold.

6. Taking care of the Claimers 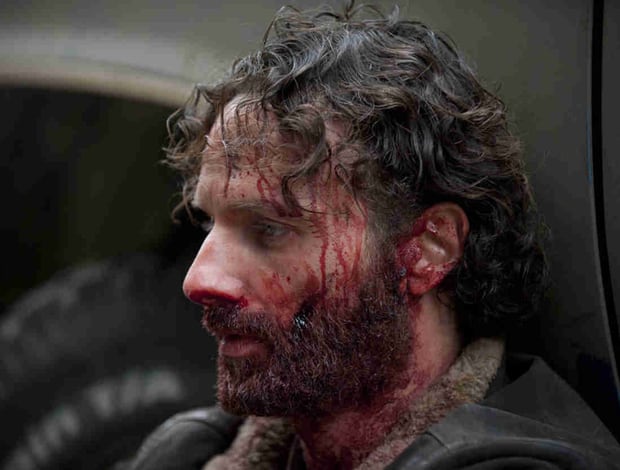 Something changed in Rick after the Governor killed Hershel. His idealistic vision of a world in which he could use reason, not violence, to resolve his conflicts was decimated. And he became hardened, and more willing to go to extremes to protect himself and his loved ones. This was, perhaps, never more apparent than in “A,” when the Claimers threatened to do some serious damage to Carl and Michonne. Rick didn’t just kill their leader, Joe; he ripped his jugular out with his own teeth. Sure, he was driven to it by the prospect of losing his family, and yes we’d seen Rick go to desperate measures before. But there was something especially unsettling about the pure rage he displayed as he took out the Claimers, even if it was justified.

When the gang finally settled in Alexandria, it seemed almost too good to be true. Especially, it seemed, for Rick. His paranoia grew as he began to realize that his fellow citizens in the Safe Zone were wholly unprepared to deal with the realities of living in a zombie apocalypse. Plus, he was falling for a pretty girl with a super abusive husband. All of those stressors eventually came to a head, and the end result was our fearless leader, bloody from a battle with Pete airing his grievances while waving a gun around in the middle of town.

We’ve seen Rick undone on more than one occasion, but it’s always been a relatively private affair, or in the midst of carnage with his allies. This public display of disaffection wasn’t his best moment, but at least he gave his fellow Alexandrians a chance to get to know the real Rick.

Interpersonal drama abounds on The Walking Dead these days. So it’s easy to forget that it is, at least in some ways, a show about zombies. That was the case, too, from time to time in Season 6 — at least, until Alexandria’s wall was breached and the town was overrun by walkers. In the ensuing chaos, Rick lost his girlfriend and nearly lost his son. So, he went into full-on warrior mode and decided to take on the undead himself. Eventually, his comrades, from Michonne to Father Gabriel, joined him in the fight to take back their new home. But for a few amazing moments, he went toe-to-toe with dozens of walkers and was still standing. Bloody, sweaty, and covered in guts — but standing nonetheless.

9. Getting together with Michonne

Happiness is definitely not a given when you’re constantly fighting for your life. So it was especially sweet when Rick and Michonne finally found some together in Season 6 of The Walking Dead. Many fans had long hoped that the two skilled survivors would figure out that they made as good of a romantic team as they did a zombie-fighting one. But between Rick’s frequent meltdowns and Michonne’s own personal demons, for a while it seemed like a long shot.

In “The Next World,” they came together the only way they could — naturally, quietly, and seemingly as a surprise to both of them. Their union was long overdue, but well worth the wait; a rare moment of genuine romance in an often grisly post-apocalyptic landscape.

It’s been years since Rick Grimes took a subtle approach to survival. And that fact can be unsettling to other characters when they meet him. When he and his allies followed Jesus to the Hilltop, they went with the hope of negotiating a deal with Gregory. Instead, they found themselves in the middle of a power play from Negan — and Rick decided to intervene. He quickly and efficiently took out the Hilltopper trying to kill him. Then he stood up, covered in blood, and took in the gaping crowd around him. Instead of offering an apology for killing one of their friends or explaining why he had to do it, he shrugged his shoulders and asked, “What?” Talk about a memorable first impression.