‘The Walking Dead’: The Season 8 Trailer and More

The Walking Dead‘s seventh season wasn’t a high point for the series. But it did have its moments — and most importantly it set the stage for the war between Rick Grimes’ friends and Negan in Season 8.

We’ll have to wait a few months to find out exactly how that battle will play out, but the series’ creative team, including executive producer Scott M. Gimple, have already revealed a few key details about the upcoming episodes. Here’s everything we know about The Walking Dead so far.

Season 8 begins with a landmark episode

It seems like only yesterday that The Walking Dead premiered on AMC and brought to life the gory, terrifying world of Robert Kirkman’s zombie apocalypse. But here we are, almost seven years later, and the series is on the brink of a huge milestone. The eighth season premiere will be The Walking Dead‘s 100th episode. And it looks like the creative team plans to mark the occasion appropriately.

In a recent interview with ComicBook.com, actor Andrew Lincoln said the Season 8 premiere will be, “one of the greatest episodes we’ve ever attempted.” Whether that means more exciting effects or some huge emotional moment remains to be seen. But regardless of how the episode plays out, it’s an enormous accomplishment for the entire cast and crew.

Michonne and Rick in The Walking Dead | AMC

At the beginning of Season 7, Rick Grimes and his friends reached their lowest point so far. And that led to what many felt was a sometimes needlessly depressing tone in subsequent episodes. Fortunately, things are at least sort of looking up for The Walking Dead‘s heroes and anti-heroes in Season 8.

Andrew Lincoln told ComicBook.com he believes Season 8 will likely pick up right where Season 7 left off. And that could help propel the story forward in a big way.

According to Gimple, the gang has some good momentum coming out of their first big skirmish with the Saviors. And a lot of that is thanks to Sasha’s incredible sacrifice in the Season 7 finale. “Sasha was the hero of that battle,” he said in a recent interview. “She is, in some ways, the rallying cry, the inspiration and the strength.”

The first 4 episodes will be huge 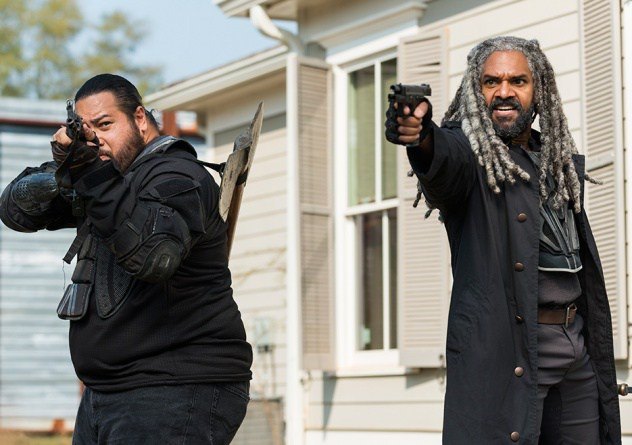 Ezekiel in The Walking Dead | AMC

The war is officially on between the Saviors and, well, everybody else. On a recent Talking Dead appearance, Gimple didn’t mince words when it came to how this new development will impact The Walking Dead‘s eighth season. He told Chris Hardwick, “The first four episodes will melt people’s minds and break their televisions.”

There’s no clear indication yet as to exactly how the brain-melting and television-breaking will happen, but it’s safe to say that TWD team isn’t afraid to bring the hype when it comes to Season 8.

Season 8 will move at a different pace

Michonne, Rick, and Carl in The Walking Dead | AMC

There are few Walking Dead fans that would accuse Season 7 of moving too quickly. But according to the series’ creative team, we can expect a change of pace in Season 8. “The pace is accelerated by virtue of the things that they’re up to,” Gimple revealed in a recent interview.

The “things” in question are, of course, a massive tactical conflict with the Saviors. Gimple said that now that there’s no turning back, we’ll see a more “kinetic” narrative structure in upcoming episodes. The accelerated pace could help inject a little life in a series that, by most accounts, has been seriously dragging.

Eugene’s got some issues

When we last saw Eugene in Season 7 of The Walking Dead, it was hard to tell exactly where his true allegiances lay. On one hand, he’s pledged his loyalty to Negan. On the other, he helped Sasha put herself in a position where she could harm his new leader.

Gimple told The Hollywood Reporter that in Season 8, they’ll be grappling with some pretty heavy questions where Eugene is concerned. “Is the goodness in Eugene dead forever? Was it ever there in the first place?” The scientist and former Alexandrian could be in trouble, too, if Negan discovers that he aided Sasha’s suicide.

We may learn more about Negan

Negan in The Walking Dead | AMC

Love him or hate him, we all know that Negan will be around for quite some time. And that could mean we’ll learn more about how, exactly, he got to be such an awful human being. The Walking Dead comics have delved into the villain’s dark backstory in the “Here’s Negan” miniseries.

In an interview with The Hollywood Reporter, Gimple revealed that some of those details could come to light on the AMC series as well. When discussing how parts of Negan’s history have informed later print storylines, the showrunner said, “we do want to introduce it a little earlier than it was in the comics.”

The war will be ‘righteous’

Maggie, Enid, and Jesus in The Walking Dead | AMC

In many ways, Season 7 was designed to lead up to the big battles we’ll see in Season 8. We saw the threat the Saviors pose to Alexandria, the Hilltop, and the Kingdom. And given Negan’s sociopathic tendencies, many of The Walking Dead‘s characters have a deeply personal stake in bringing him down. This means we can expect to see Rick and his friends truly rising to the occasion.

Gimple told Variety that in many ways, Negan’s way of ruling threatens the potential to build a civilization in The Walking Dead‘s post-apocalyptic world. That means that the war that unfolds won’t just be tactical, but — per Gimple — a “righteous” conflict for what many of our core characters feel is a noble cause.

We might get to see more of our favorite characters

Carol and Daryl in The Walking Dead | AMC

As The Walking Dead has expanded its scope and brought in new colonies of survivors, we’ve lost track of some key players. In Season 7, we saw very little of characters, including Aaron, Morgan, and especially Carol. That will likely change in Season 8, as the various factions come together to fight against their common enemy.

Gimple confirmed to The Hollywood Reporter that more upcoming episodes will feature the entire ensemble. And given how large the cast has gotten over the years, planning for these bigger moments has proven to be a logistical challenge for TWD team. But it will also be a treat for fans who’ve missed seeing the core group interact.

Jadis on The Walking Dead | AMC

Despite Season 7‘s numerous narrative missteps, it did solidly manage to convey a pretty central theme: That life, even when it’s at its hardest, is worth fighting for. According to Gimple, Season 8 of The Walking Dead will also have a clear theme — but he’s not willing to reveal it just yet.

“There is a theme, but if I told you, you would know what the story is going to be,” he told The Hollywood Reporter. In other words, he’s not willing to throw us any more spoilers just yet. Still, given everything else we’ve been told about the upcoming war, it’s pretty easy to deduce that at least one of the themes of the season will be the hardships of war.

It could feature a big change in the comics’ timeline

In The Walking Dead comics, the war between Rick’s allies and the Saviors ended on a somewhat surprising note. Almost as soon as the dust had settled, the series skipped two years forward. Readers missed much of the immediate fallout and rebuilding — but got a chance to get to know some new characters and experience a shake-up in the plot.

It’s too early to say whether a similar narrative jump could happen in AMC’s version of The Walking Dead. But according to Gimple, that post-war period of time could play out much differently on TV. In an interview with The Hollywood Reporter, he acknowledged that while comic fans will anticipate the time shift, he’s interested in exploring some of the events that comic fans didn’t get to see.

#TWD Comic-Con art is finally here. Are you ready for Rick and Negan to face off this fall? #SDCC pic.twitter.com/IyoOYmTUWB