‘The Walking Dead’ Steamrolls Into Season 6 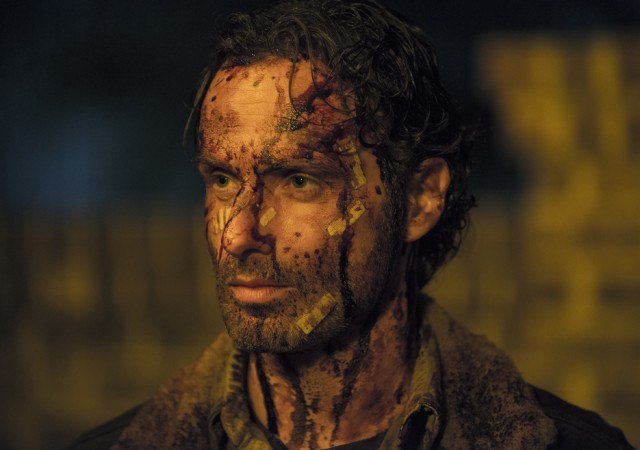 The Walking Dead returned to the small screen on October 11, for its sixth season. Showrunner Scott Gimple and writer Matthew Negrete waste little time in immersing viewers into the maelstrom of events that’s already unfurling. Episode director Greg Nicotero also opts to use a salient technique to cut between flashback and reality: the black and white frame. The ‘bent’ chronology also adds to the suspense that builds throughout the episode. By making it non-linear, Nicotero and company employ an age-old technique, and pull it off.

The Walking Dead garnered some criticism in the episodes following the dissolution of the prison refuge — that is, after the Governor had his way and fizzled out. At that point, the show leaped toward existential, introverted storytelling — something that works only for viewers patient enough for cautious dramas. After the stint at Terminus, however, momentum shifted and the program got back on the rails (no, not the ones that led to Terminus). The Alexandria plot-line, thus far, has been brilliant, and even returned Morgan to us (the fan favorite played by Lennie James).

With the season six premiere, entitled “First Time Again,” the subplot of Rick’s regression toward primal instincts is touched upon, and then juxtaposed against Morgan’s distinct form of pacifism. What’s more, the dynamic between Morgan and Rick is now poised to be an enthralling, consequential series of events over the sixth season.

Again, the most innovative facet of this premiere is the quick-cuts that Nicotero employs between flashback and reality (although the “flashbacks” still pick up after season five’s finale “Conquer”). And, he does it in such a way as to distinctly set the barriers between each reality. 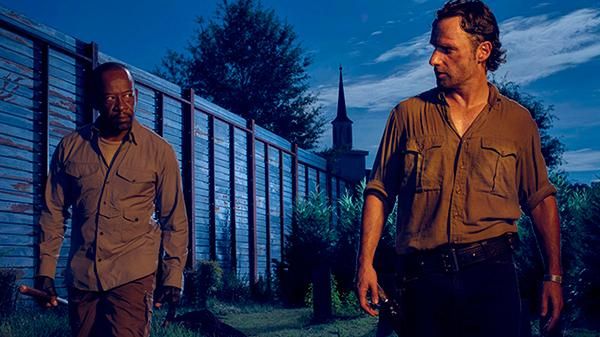 While more questions arise in the premiere than answers, that is perfectly acceptable for a premiere. In fact, the questions set the stage for what could become the largest-scale conflict that the survivors have had to face in all six years. Their new affliction is no stranger to the show’s fans — walkers. (Or “roamers” as new character Heath (Corey Hawkins) titles them.) This is no run-of-the-mill predicament, though, for hoards of walkers have been amassing in a quarry/forsaken community long since overrun.

Rick’s answer to this quagmire solidifies his position as the leader of Alexandria, and thus the episode runs the gamut in terms of lingering effects: its production values are sound (aside from some standard CGI effects in the quarry), the scenery is still pristine, and the characters are tested amongst themselves and more organically, with the emergence of this cache of ravenous zombies.

While the episode may have been more properly named “The Detour,” for the solution that is put into play, there is still so much to like about the direction of season six. Aside from the usual katana swinging, arrow shooting, and flesh oozing viewers have come to expect, there will also be some more in-fighting, a revision of the Alexandria hierarchy, and a more comprehensive introduction to Morgan’s character.

The episode commences as Rick hastily prepares his people for the execution of some larger plan. As it turns out, the effectively barricaded walkers that have been filling a quarry in a small canyon are now ‘leaking’ out. Rick determines that the only way to quell such an attack is to steer the walkers clear from the Alexandria community.

In black and white

Then, the show sort of somersaults back to a different reality, through a black and white lens, where viewers revisit Deanna’s most regretful moment, with the death of Reg. Rick is then seen talking to Morgan, but the two are soon distracted by the sounds of digging near the fence. Gabriel Stokes (Seth Gilliam) and Tobin (Jason Douglas) are digging the graves for Reg and the crazed killer Pete (Corey Brill). Rick informs them that killers will not be buried within the community. Deanna (Tovah Feldshuh) agrees, telling the men to take Pete’s body down some street the villagers hardly wander down, so “the trees can have him.”

Glenn, Nicholas (Michael Traynor), and Heath (Hawkins) are fulfilling their portion of the plan when they encounter an abandoned building with walkers snarling and clawing their way out. In order to keep the plan in order, the three will have to silence these zombies so as not to distract the larger mass. They crack open the door, but another barrier lies in the way. So, they crack open a window and let the zombies crawl out. One by one the trio deals with them, and Nicholas ultimately saves Glenn’s life.

Carter (Ethan Embry) decides to go rogue against Rick earlier in the episode (a “black and white moment”), but comes full circle as Rick’s plan slowly unfurls. He apologizes to Rick for wanting to kill him to reclaim Alexandria. Then, Carter “takes the front,” an effort to help shepherd zombies along their plotted course. In the process, though, he is munched on by a walker trapped in a tree. The noise of his death (finished by Rick) draws the zombies to the woods (they are now away from the quarry and following Daryl on his motorcycle, and Sasha and Abraham in their car) but they are put back on track with a few gunshots.

Periodically, viewers glimpse Rick’s group and the Alexandrians preparing for Rick’s plan. They take metal sheets from the construction site and create a fence, or a sort of maze actually, to steer the walkers away from Alexandria, where they’d be sure to visit had there been no action taken.

Following Carter’s death, Morgan is forced to look to Michonne for answers. He subtly questions Rick’s authority/belligerence and Michonne sort of accepts it as the new normal.

The most climactic moment of the episode comes in the last two minutes, as a blaring horn bursts out through the woods. Hidden in the thickets, Rick and Morgan are left to question where the noise is coming from — and determine it’s coming from “home.” The episode ends in an aerial long shot, as the herds of walkers take a sharp turn toward Alexandria.

Be sure to catch The Walking Dead on AMC on Sunday nights at 9 p.m.