‘The Walking Dead’: The Most Shocking Deaths (So Far)

Daryl with a rocket launcher | AMC

The Walking Dead is a show that’s been unafraid to kill off key characters throughout its run, with each death proving to be more painful than the last. Much like Game of Thrones, the showrunners have little to no regard for the feelings of fans when it comes to serving the greater narrative of the series. Oftentimes, a death is necessary in order to give viewers a sense of the stakes. When a show makes death a permanent fixture, it ramps up the series’ suspense.

The AMC zombie drama has proven itself to be the frontrunner in character deaths. Each subsequent passing has shocked us, marking turning points in the series each time it occurs. Fan favorites and villains alike have bit the dust, but a small handful of deaths stand above the others as the most shocking and surprising of the bunch. These are the ones that changed the show forever, sending fans into an uproar the second the credits rolled.

For much of his run in the first two seasons, Dale was the moral compass of the group. It made it that much more tragic to see him get disemboweled by a walker. It seemed odd that any walker would be able to sneak up on someone, but that’s just one opinion. Regardless, his death was one that hit hard when it occurred, especially given his status as a generally loved and respected character.

Shane spent the better part of his run on the show as the easiest character to hate we’ve seen this side of Lori. After sleeping with his best friend’s wife, he then proceeded to show little in the way of morals when it came to saving others, highlighted by him shooting Otis in the leg so that he could escape a zombie horde.

His death was a true game changer for the show, demonstrating for the first time that anyone who dies immediately comes back as a walker, regardless of whether or not they were bitten.

Season 2 was a veritable bloodbath for The Walking Dead, and Sophia’s death was one in a long line of fatalities. After losing the young girl in the woods, we spend episode after episode watching the group scour the surrounding area looking for her. As it turns out, she had been bitten, turned into a walker, and was locked in Hershel’s mysterious barn. Upon opening the barn, Sophia is the final walker to emerge, leading to quite possibly the most heart-wrenching death of the entire series, as her mother is forced to look on while Rick aims his revolver.

Many fans would argue that Lori’s death was a long time coming when it occurred in Season 3. While Lori went into labor, walkers overran the prison the group was holed up in. Complications forced an emergency C-section, which in turn, killed her. Her baby did end up surviving, but Lori’s death is what many would argue unraveled Rick to the point of no return.

In the absence of Dale, Hershel in many ways was the only thing standing between the group and complete chaos, offering wisdom and guidance in even the most chaotic of moments. Sadly, he perished at the hands of the Governor, while his family could only watch helplessly from afar. Thankfully, the Governor met his end at the hands of Michonne soon after, so at least there was some semblance of justice when it was all said and done.

Although we didn’t initially see who Negan selected to die in the Season 6 finale, there’s no question that it ranked as one of the show’s most shocking deaths. After a twisted game of “eeny, meeny, miny, moe,” Negan begins to brutally beat one of the members of Rick’s group to death with a barbed wire-covered baseball bat he calls “Lucille.” Since the beating was only shown from the victim’s perspective, viewers had to wait until the Season 7 premiere before they knew who was killed.

The premiere in turn, revealed Abraham as the one to go, but with a twist: Negan decided to kill another character shortly after, offing Glenn once and for all, while Maggie was forced to look on in terror. 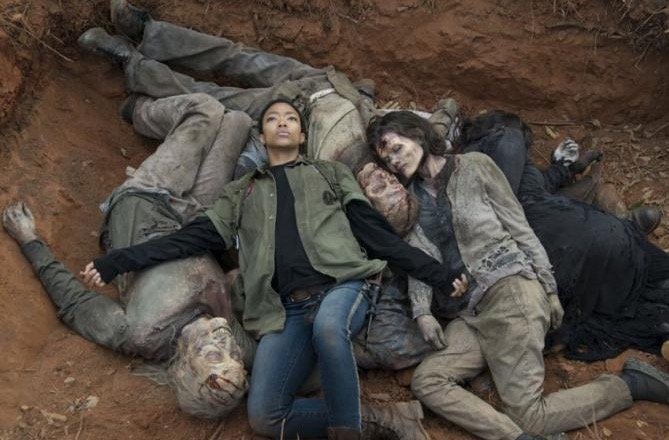 Sasha, lying dead on a pile of zombies | AMC

Sasha’s death was about as selfless as it gets. After getting captured by Negan, she takes a suicide pill given to her by Eugene. The zombie version of Sasha then attacks Negan, catching him off guard and sparking the full-on rebellion against the Saviors.