‘The Walking Dead’: 10 of the Show’s Funniest Moments

Unless you find gore, horror, and decomposing zombies particularly humorous, The Walking Dead is not a funny show. That doesn’t mean it’s never given fans cause to laugh, though. Over the last seven years, AMC’s series has culled together a handful of moments that injected some lighthearted fun into an otherwise grim landscape. Sometimes, it was done on purpose, thanks to smart aleck characters or a particularly ridiculous scenario. Other times, it was because a scene didn’t play out quite the way TWD‘s creators may have intended.

Here are 10 of the funniest moments in The Walking Dead.

In general, Glenn and Maggie’s relationship offered up a glimmer of happiness in The Walking Dead‘s bleak world. From Glenn’s initial awkward fumbling attempts at romance to his final promise to her, they became devoted to one another and to building a better future. Still, that doesn’t mean Maggie was always on board.

After their first sexual encounter on a pharmacy floor, Glenn approached her back at the farm in “Chupacabra.” He hopefully reminded her that they still had 11 condoms left — a not-so-smooth attempt at trying to woo her. She shot back that all those prophylactics represented to her were, “11 minutes of (her) life that (she’d) never get back.” Painful for Glenn, yes, but it was one of the funniest lines on The Walking Dead up until that point.

The entire Walking Dead gang was weary by the time they landed at the prison in the Season 3 opener, “Seed.” And the last thing Rick wanted to do was talk about his relationship problems with his estranged wife, Lori. She followed him across the prison’s yard, though, and kept at her attempts to pin him into a conversation until he snapped.

“I’m doing stuff, Lori,” he bit back at her. “Things.” The scene, and particularly Andrew Lincoln’s dramatic delivery of that final line, sent fans on the internet into a frenzy. It was weird, and he was so serious about it despite how goofy the dialogue was. And while it probably wasn’t meant to be funny, in retrospect, it certainly made fans laugh. And “stuff and things” is still one of the most-quoted lines in the series’ seven seasons. 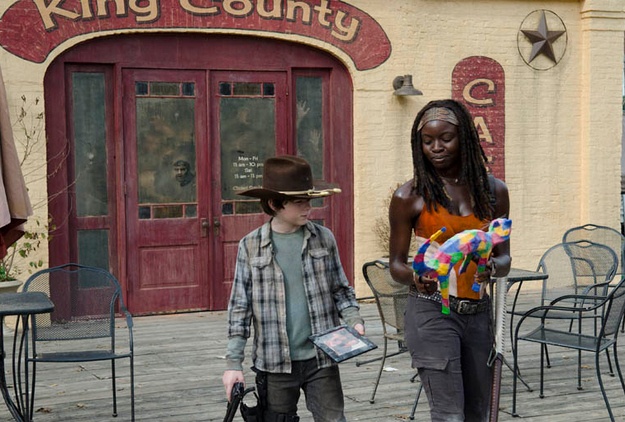 One of the most unexpected but nevertheless enjoyable relationships on The Walking Dead has been between Michonne and Carl. Their bond began to form in the Season 3 episode “Clear,” when they took off to look for supplies while Rick was busy negotiating with an unstable Morgan, and ended up getting to know each other a little better as a result.

After Michonne risked her life to retrieve a framed photo of Lori for Carl, he seemed impressed by her survival skills. Then, she showed him the other thing she’d fought back zombies to snag — a rainbow colored statue of a cat.

Art appreciation is subjective, sure, but there was definitely something strangely humorous about both the piece in question and the entire scenario. Danai Gurira infused Michonne with a subtle comedic flair when she pulled out the statue and told Carl, “I just couldn’t leave this behind. It’s too damn gorgeous.” Given that the rest of the episode was so intense, the moment seemed especially humorous. And the recent callback to the cat statue — when Rick retrieved it for Michonne — was both a sweet gesture and a fun reminder of a time in the series that felt a little less dire.

4. Merle sharing a drink with walkers

Whether you loved Merle or hated him, there was no denying that he had one of the most dynamic personalities of any Walking Dead character. Throughout his run on the series, he was often making others the butt of the joke, and went out of his way to make other characters uncomfortable with his racist, sexist remarks.

In his final moments, though, he found humor in his own demise — which in turn created one of the funnier sequences on The Walking Dead. As he sat in his car, drinking, he observed the walkers that were surrounding him with an almost hysterical laugh. Then, he tipped his bottle toward the car window and the hungry zombies that were trying to get in. It was twisted, sure, but equal parts comedic and comforting that he could find something to laugh about in his darkest hour.

5. Any time Abraham opened his mouth

The Walking Dead hasn’t been the same since Abraham uttered his final, foul-mouthed defiance and got his head bashed in by Negan. But we still remember the many, many times he shared his, well, unique perspective on the world.

Abraham had plenty of awesome one-liners — many of which involved the D-word — and he never held back from sharing his frank opinion about everything under the post-apocalyptic sun. Whether he was asking about Glenn and Maggie’s parental plans using a Bisquick metaphor or espousing a profanity-laden defense of Rick Grimes’ leadership abilities, Abraham was the go-to source for comedy for more than two seasons.

When Glenn and Tara met Eugene, Abraham, and Rosita on the road, they had no idea they were forming an alliance that would last them until their last moments. And as they were all feeling one another out, so to speak, Eugene took a liking to Tara.

However, when he tried to make his feelings known in “Us,” Tara bluntly turned him down with a simple, “Yeah, I like girls.” Eugene’s stunned silence and hasty claim that he was “well aware” of that fact made for a painfully awkward and uncomfortably funny exchange. Glenn’s inability to keep a straight face made the scene that much more humorous.

If you were to list out The Walking Dead‘s most approachable characters, Carol would probably not make the list. That is, as long as you knew what she was capable of. But in “Remember,” she sat down across from Deanna and painted a picture of herself as a well-to-do den mother in order to keep the group in the Alexandria leader’s good graces.

Carol may have been able to say “I’m a real people person,” with a perfectly straight face. But fans know she’d just as soon take a blowtorch to Deanna’s house and kill her in her sleep if it came down to it. The chipper version of Carol was irreverently funny because it was so far off of our own understanding of who she really is. 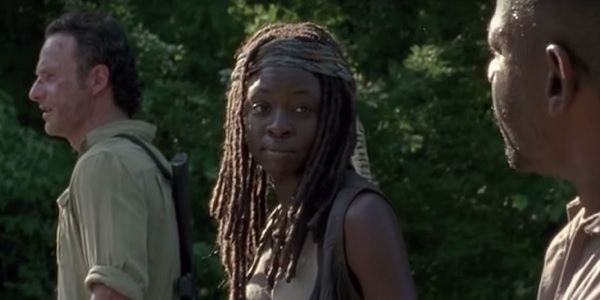 Sometimes, the best jokes are those that take a little bit of time to pay off. And in the case of this particular joke, the punchline was certainly a long time coming. In the Season 3 episode “Clear,” Michonne nicked some of Morgan’s food — including a peanut butter protein bar. When Rick asked her about it, she simply reminded him that the “mat said welcome.”

In the Season 6 premiere, “First Time Again,” Morgan and Michonne were just becoming reacquainted. As they stood around waiting for an advancing zombie hoard, he asked her if she’d eaten one of his protein bars way back when. Her nonplussed assertion that she didn’t, probably made eagle-eyed fans smirk. His insistence that there had been one peanut butter bar left, and her response — that it always seems like there’s one peanut butter one left — was likewise worthy of a laugh or two.

Rick is, for the most part, very good at many things: thinking on his feet, getting out of sticky situations, and keeping himself and his friends alive. However, we learned in “The Next World” that he does not have the best taste in music. As he and Daryl hit the road in search of supplies, Rick slid a CD into the car stereo to his passenger’s vocal dismay. Then, he began to snap along to the dulcet tones of Ronnie Dee while Daryl looked on in utter contempt.

It’s one of the few purely lighthearted moments in the series’ seven season history — and chuckle-worthy, if only to see the joy Rick obviously gets in annoying his friend.

Usually, action sequences in The Walking Dead are a pulse-pounding, adrenaline-fueled affair. In the Season 6 episode “The Next World,” though, Daryl and Rick’s pursuit of Jesus took on a considerably more Benny Hill-esque quality.

The slippery thief, who’d stolen their supplies and ended up on the roof of their truck, led both men on a chase around an open field. At varying points in the sequence, Daryl looked like a kid playing tag, and Rick looked like a hapless stunt car driver as he moved the clunky van around trying to block Jesus off. In the end, the van ended up in the river and everyone’s egos were bruised. But that didn’t make it any less funny.