Spoilers ahead for The Walking Dead Season 6!

AMC hasn’t aired a new episode of The Walking Dead since November 29, 2015. It is set to return on February 14. In the meantime, we’ve been waiting for the gargantuan cable show to come back and enchant, or destroy, our Sunday nights. What more is there to do, during this interlude, than conjure up some fanciful theories about the back half of the season? At this point, fates of many TWD core characters are hanging in the balance. Alexandria has imploded — well, it’s overrun — and Glenn has made it to the perimeter. (As if Twitter didn’t notify us of this with its green balloon emoji following a “#TWD” tweet.)

Deanna (Tovah Feldshuh) has died, Ron (Austin Abrams) is still a little twerp, and there is a perfectly adverse relationship between Carol (Melissa McBride) and Morgan (Lennie James). And let’s not forget that the comic book villain Negan (to be played by Jeffrey Dean Morgan) is poised to make a blazing entrance to the show. There’s plenty of other psychological struggles we’d be remiss not to mention — like Abraham and Sasha’s duel quandary, and Maggie (Lauren Cohan) is pregnant!

But enough with the backtracking. What should viewers expect in the show’s second half premiere, entitled “No Way Out,” directed by Greg Nicotero?

There are two angles we’ll need to discuss: Glenn Rhee’s (Steven Yeun) arc, and Carl Grimes’s (Chandler Riggs). And why them? Well, the Season 6 mid-season trailer was released last week, and begins to hint at a few parallels with the show’s comic book series. 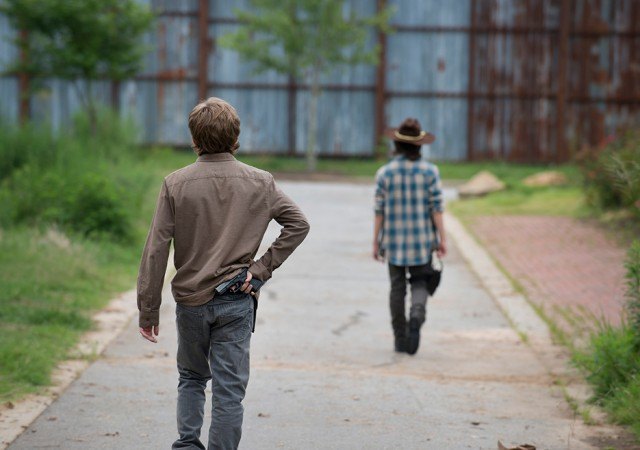 As the walkers penetrated Alexandria in “Start to Finish,” the gang of Rick (Andrew Lincoln), Jessie (Alexandra Breckenridge), Sam (Major Dodson), Ron, Gabriel (Seth Gilliam), Carl, and Michonne (Danai Gurira) covered themselves in walker blood and fled the place. Unsurprisingly, though, Sam calls out to his mother as they’re surrounded by ravenous zombies.

According to Katie Granger of moviepilot.com, in the comic book series, Jessie’s younger son is actually named Ron, and the boy is munched on by walkers after he calls out to his mother. Jessie is bitten, too, but holds on to Carl’s hand regardless (as she does in the show’s trailer). The comics go a step further, too, as Rick is forced to chop her arm off to free Carl.

Granger writes that in these comics, at that moment, Douglas Monroe (a character translated in the show as Deanna Monroe) panics and shoots Carl in the eye. From there, he is left badly scarred. But people have survived worse in this apocalyptic world.

Plus, it’s not too far off the mark to think that Ron (Abrams), who’s already been combative with Carl, might try to shoot Carl, a boy he sees as a homewrecker — for Enid (Katelyn Nacon) was his “girlfriend” before Carl strolled into town.

Granger asserts that in the comics, Carl lives and is left…disgruntled. This new obstinate front drives him into contact with Negan, the show’s next big antagonist. And not to belabor the point, but as Granger points out, the narrative source of this “eye-loss” is called “No Way Out,” the same name as Episode 9 of the TV show on February 14. 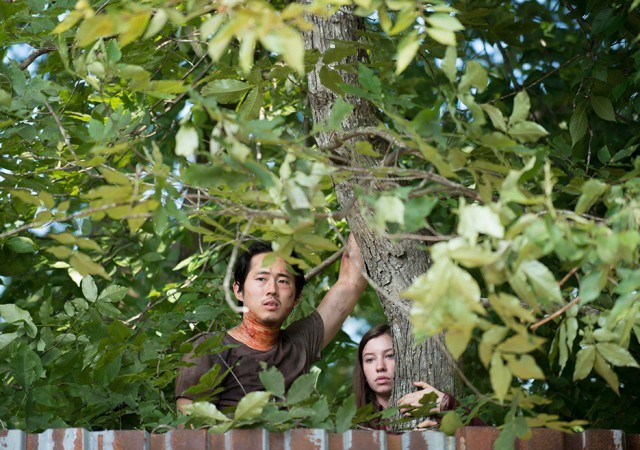 Serrano continues, noting that the death Nicotero is likely speaking of is Glenn’s. Glenn, a survivor since Season 1, has long been the subject of debate this season — first thought dead, then saved, and now “threatened” again. Serrano writes that in the comics, Negan ambushes Rick and company on their way to another community. He then lines up Rick’s people and decides to kill one, to teach the leader a lesson. He chooses Glenn and beats him with a bat.

It is certainly plausible that the element of surprise is something these showrunners covet, so don’t count on the Glenn death! Nonetheless, Negan will be a formidable opponent who will surely stir the pot.

Be sure to tune into AMC on February 14 for “No Way Out.”