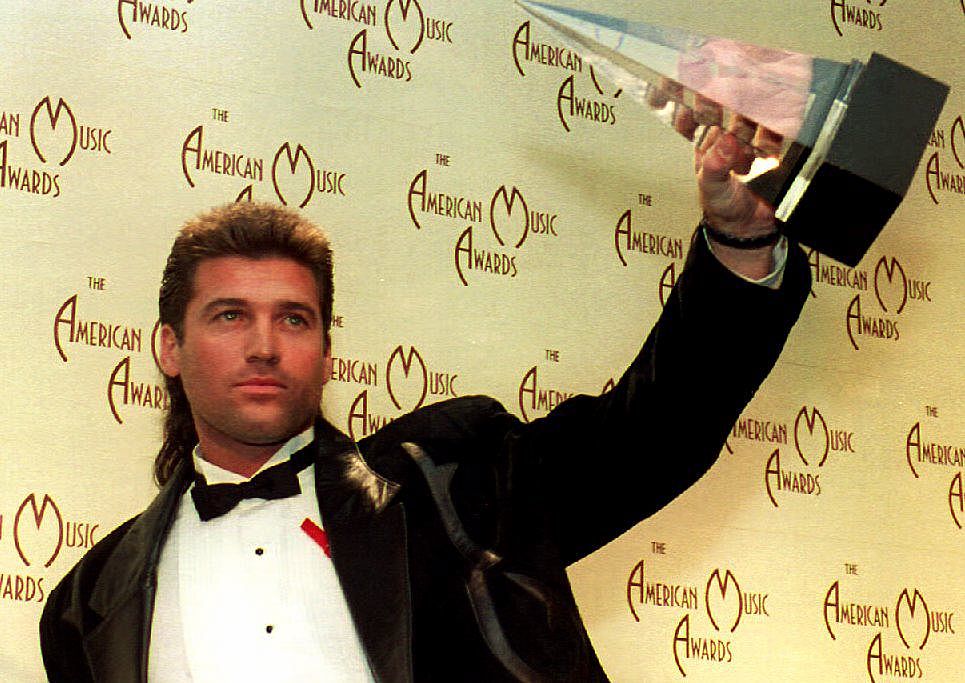 The mullet was one of Billy Ray Cyrus’ most well-known characteristics. | VINCE BUCCI/AFP/Getty Images

It’s truly a wonder sometimes what we were thinking during the ’90s. The fashion was pretty terrible and the pop music was definitely questionable. We have previously praised the best music to come out of the 1990s, but we would be doing a huge disservice to not talk about the worst. Because let’s face it, there’s a lot! Here are 10 of the worst songs from the decade of grunge.

The 1997 single was released from a Norwegian pop group. The song has the female singer deeming herself a “Barbie Girl” and pretty much flirting with Ken throughout the track. It’s pretty terrible and cheesy, but again, the ’90s were full of that so it got people singing along. Believe it or not, the song was ranked among the “Best Number One of All Time” on VH1. It also led to a lawsuit.

Mattel Inc. filed a lawsuit against MCA Records Inc. and Universal Music & Video Distribution Inc. for trademark infringement and dilution due to the unauthorized use of Barbie. According to the Rolling Stone, the company was not very happy with the “hanky panky” theme of the song and the lawsuit claimed that the lyrics, “associate sexual and other unsavory themes with Mattel’s Barbie products.” The lawsuit however, was thrown out, but in a way, Mattel still won since the pop group split up.

In 2001, the band gave this statement according to Billboard, “We have looked each other straight in the eye and reached the conclusion that, for the moment, the spark is missing.”

You probably remember the 1999 hit that was actually a renewed version of the 1949 song. The dance hit has the singer talking about all of the women in his life and lists them off by name. The beat really lends itself to the line dance craze that was popular during the time so that’s probably why it got so much attention. The song made it to No. 3 on the Billboard Hot 100 in the U.S. Lou Bega never had another big hit in the U.S., but the German musician did release five albums.

The title pretty much says it all! This dance hit was all about a man’s appreciation for thongs and booty. The lyrics are simple and repetitive enough to get stuck in your head. The music video starts off with a toddler girl handing Sisqó a thong and from there on we see many women in bikinis on a beach. The terrible hit shockingly got four Grammy nominations and made it to No. three on the Billboard Hot 100. The single is from the R&B artist’s Unleash the Dragon album.

The reggae song from the Canadian musician had people scratching their heads because no one knew what he was talking about. It’s actually based on an incident that led to Snow being charged with two counts of attempted murder in 1989. The most notable lyrics that can be heard is “lick he bum bum down.” The song certainly wasn’t an award magnet but it did win a Juno Award for Best Reggae Recording.

The British group debuted with this hit and were pretty much never heard from again. The song features a man saying he’s too sexy to wear clothes and really do anything. For some reason, pop culture went wild for it and used it in many movies and television shows including Encino Man, Baywatch, The West Wing, The Simpsons, NCIS, and so much more. If there is a scene with a shirtless man in it then chances are it’s played. The brother duo went on to make more music, but they are pretty much a one-hit wonder in the U.S.

There are a lot of raunchy songs on the radio now which probably wouldn’t have been possible without “raunchy” R&B from this decade. This song is pretty self-explanatory given the title, and is also pretty tame in comparison to today’s music. The song is actually boring and just bad. The group went on to do five albums together before splitting up to pursue solo careers.

The song really made the country singer known and was the reason for a lot of line dancing. But in the end, it’s another ear worm that you realize is particularly whiny and has terrible lyrics. But you’ve got to hand it to Billy Ray since he got so far with it. The 1992 song was nominated for Record of the Year and Song of the Year at the Grammy Awards. It was also the first single to go triple platinum in Australia. Then, of course there was the fact that he was able to get his daughter an acting and music career of her own years later.

The Canadian alternative rock band, came out with the single in 1993. It became popular in Germany, Australia, and the United States. It also made it into the U.S. Billboard Hot 100. Although most people would recognize the humming part of the song, the lyrics are pretty weird, depressing, and don’t fully make sense.

Sometimes a different artist covering an established track can lead to a new classic, but this was not one of those times. The rap-rock band released their cover of George Michael’s “Faith” in 1997. The cover didn’t get as far as the original when it came to popularity and George Michael wasn’t much of a fan either. “What we’ve heard from George Michael’s people is that he hates it and hates us for doing it,” revealed their guitarist Wes Borland. “He apparently really despises it.”

This song is pretty interesting given that the lyrics aren’t terrible, but the vocals are pretty strange. Even lead singer, Linda Perry has spoken out about how she hates how she sounds. “I wasn’t really a big fan of my band,” she revealed to Rolling Stone. “I did love ‘What’s Up?’ but I hated the production. When I heard our record for the first time I cried. It didn’t sound like me. It made me belligerent and a real a**hole. I wanted to say, ‘We’re a f***ing, bad-a** cool band. We’re not that fluffy polished bullshit that you’re listening to.’ It was really difficult.”